2 new 6″ figures arrived in Belgium this week and they are not the friendly kind. First up, we have the Red Ninja.

The question here is, are the Red Ninjas part of the Arashikage Clan or a part of Cobra or somehow both? You see, the art (see below) depicts the figures with the Arashikage symbol on their foreheads, whereas the figure itself has the Cobra sigil there. What’s the deal here? Anybody know why this is? A miscommunication between art en production team? A mistake made somewhere down the line or just some insignificant detail to drive some of the collectors nuts as they try to understand why this is…

Symbol aside, the figure looks really menacing and is stocked with some very deadly weapons. A long sword, a short sword, 2 dagger like weapons (who I know are actually defensive tools called sai), 2 axes and 2 scythes. They probably all have cool Japanese names, feel free to comment them below. Knowing is half the battle after all, and clearly I don’t know them all.

Next up we have the big Cobra honcho himself, Cobra Commander (they will make Serpentor sometime down the line, I’m sure of it, but in my book, CC is the leader of Cobra, Serpie is just a science project gone wrong by Dr. Mindbender).

It was pretty obvious that Cobra Commander would get a figure in the Classified line. It’s actually a nice updated look on his original color scheme. I really like the deep blue and the small gold details. I don’t care for the weapons all that much. The gun looks like he stole it from a pirate somewhere (probably in Disneyland) and the sword looks very ceremonial, as in used by some obscure cult leader to slice open a sheep for an even weirder ritual… Anyway, the figure is great. And talking about great things, just look at the artwork. True pieces of art yet again.

That’s it for now. Believe it or not, but even more figures are in pre-order! So hopefully I’ll be able to show them off here in the not too distant future. This post will go live after the Hasbro Pulscon will hopefully have revealed some new figures. Fingers crossed we get some new goodies coming very soon. Until then, see you again soon and …

No blue or other pills, but another 4 new Classified figures have arrived. 2 figures from In Demand Toys and 2 from Amazon.com arrived this week. I was quite happy to find out that the figures on Amazon.com could be shipped to Belgium and so I pre-ordered some there when they became available. The first figure to arrive is Arctic Mission Storm Shadow. Now, they packaged him as a member of Cobra, but come on, we can all agree that the look of the figure is based on the 1993 3.75″ Ninja Force Storm Shadow, who by then was a member of the Joe team. A bit of confusion on Habro’s part (to be fair, Storm Shadow did change sides a few times, it’s hard to keep track of) or did they just choose the best look for him?

As with all of the figures released in the Classified series, the art on the box is on point. The artists really delivered the goods on these boxes.

So far, I haven’t had any issues with the quality of the figures (I haven’t actually unboxed them yet, maybe when I do something will come up), but with this one, I can see a (very little) paint error on his face. A small drop of skin tone has dropped on his black covered chin and then a little black drop is located on his gold Arashikage logo… No big deal I guess, but it just caught my attention. 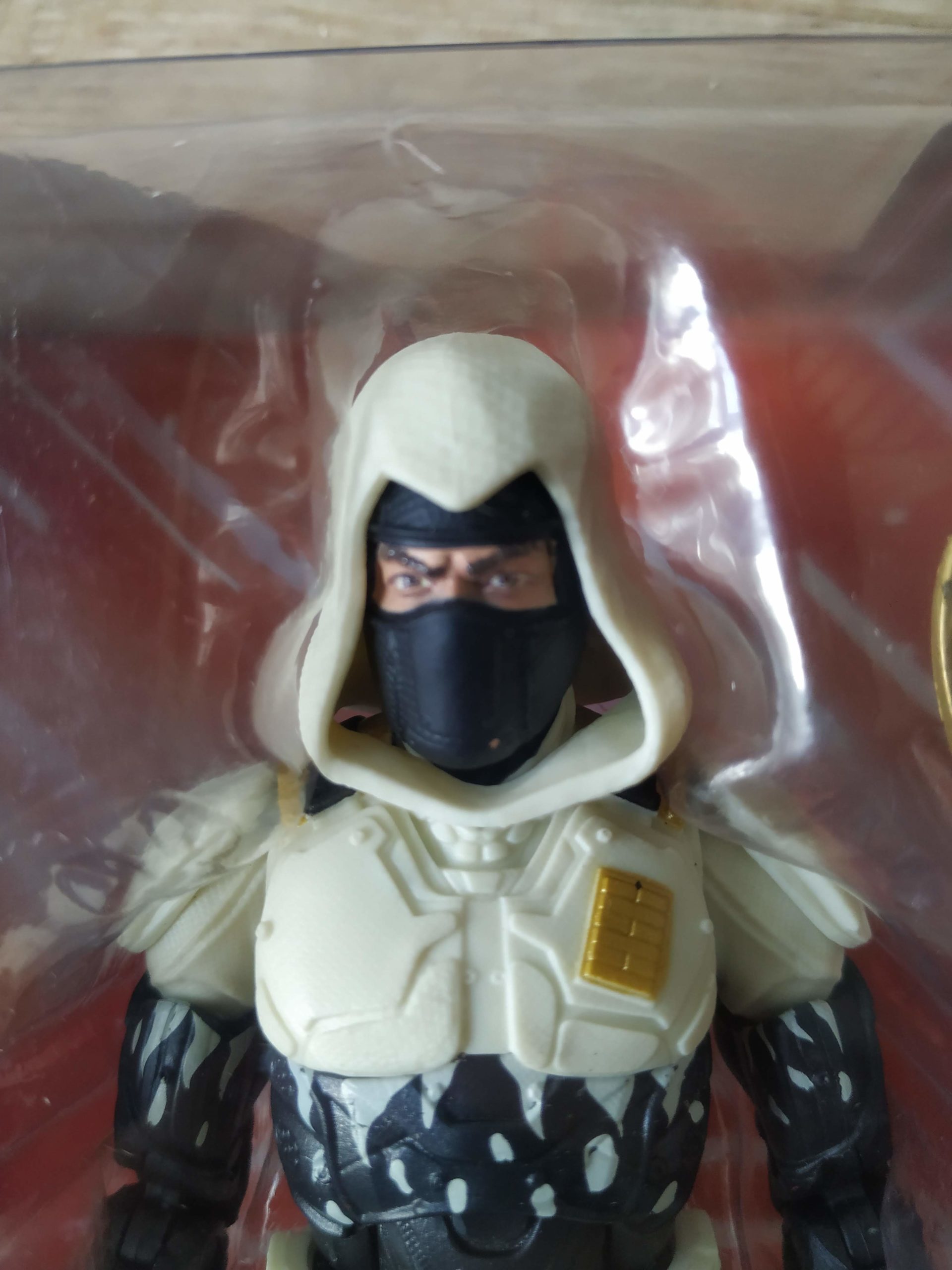 The next figure I ordered with Amazon that arrived is Gung-Ho. As with Roadblock, it’s a bit of a mystery to me why they chose him over Flint or Lady Jaye or – fill in your favorite figure… In any case, the figure looks good.

Perhaps it’s the placement in the bubble or maybe it’s a design flaw, but his cap looks a bit off to me, a bit too small for his head. 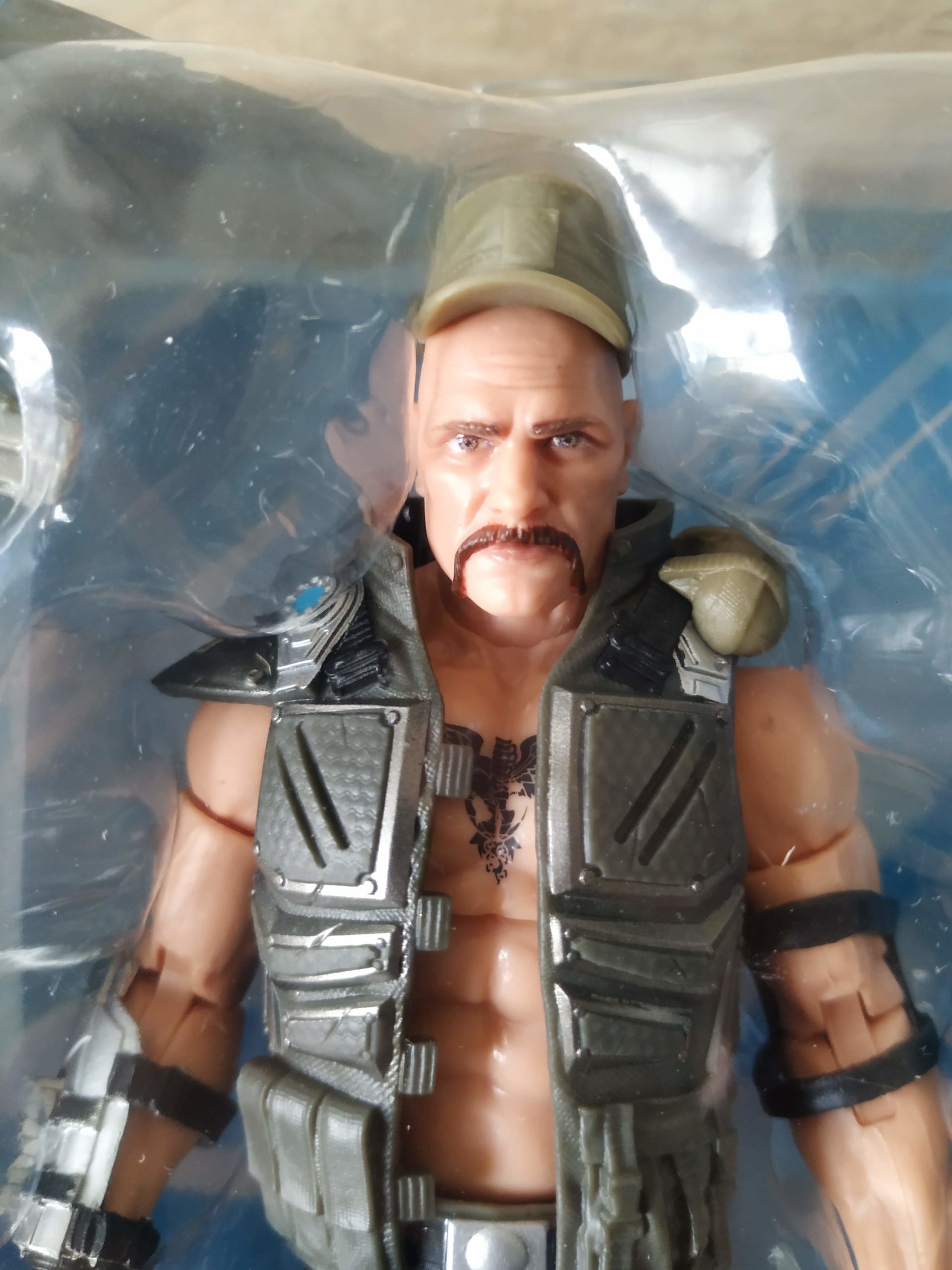 That’s it for the Amazon figures for now, there is more to come in the following weeks… I already got my shipping notices. I’ll keep you posted on the blog and on socials. If you’re not following on socials, there’s Twitter, Facebook and Instagram. Give us a follow and a like.

Now over to the figures I was able to order over on In Demand Toys. I was not expecting to be able to find the Target Exclusive figures here in Europe easily, but to my surprise, they popped up on the site. I was too late for the Cobra Trooper and The Baroness, but I’m on the waiting list, so hopefully they’ll have some more stock coming. For now, I’m quite happy with a v2 Roadblock (I don’t know why he’s so popular, is this The Rock effect?) and the very cool looking Beach Head. 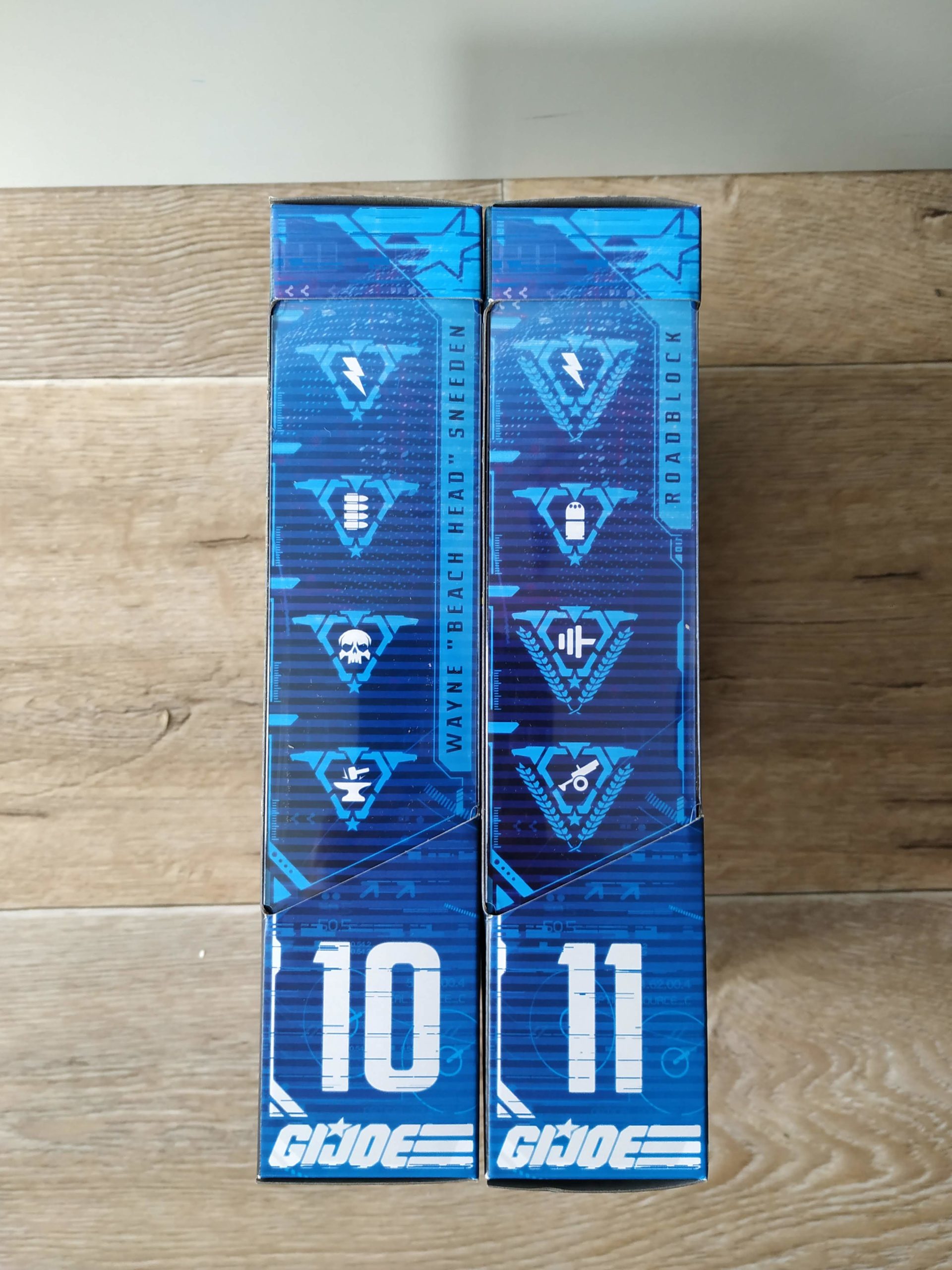 These boxes really are cool to put on a shelf just like this. And the contents and artwork are even better.

I must admit that I have my doubt about a second version of Roadblock this early in the line simply because there are so many cool and exciting characters to choose from on both sides of the battle. The figure does look cool and it’s not a simple repaint. He actually looks like a different figure, Heavy Duty vibes on that v2 Roadblock. And very hipster with that beard…

Beach Head is a fan favorite for most Joe fans and the figure is a true homage to the original 3.75″ from 1986. I’m not so sure about the color of his weapons, I’d have preferred them in black or even grey (as the ’86 version), but I guess you can’t have it all. The beret is awesome though!

Roadblock’s art gives me a Devil’s Due kind of vibe, where Beach Head looks a lot more realistic. Both true pieces of art though. 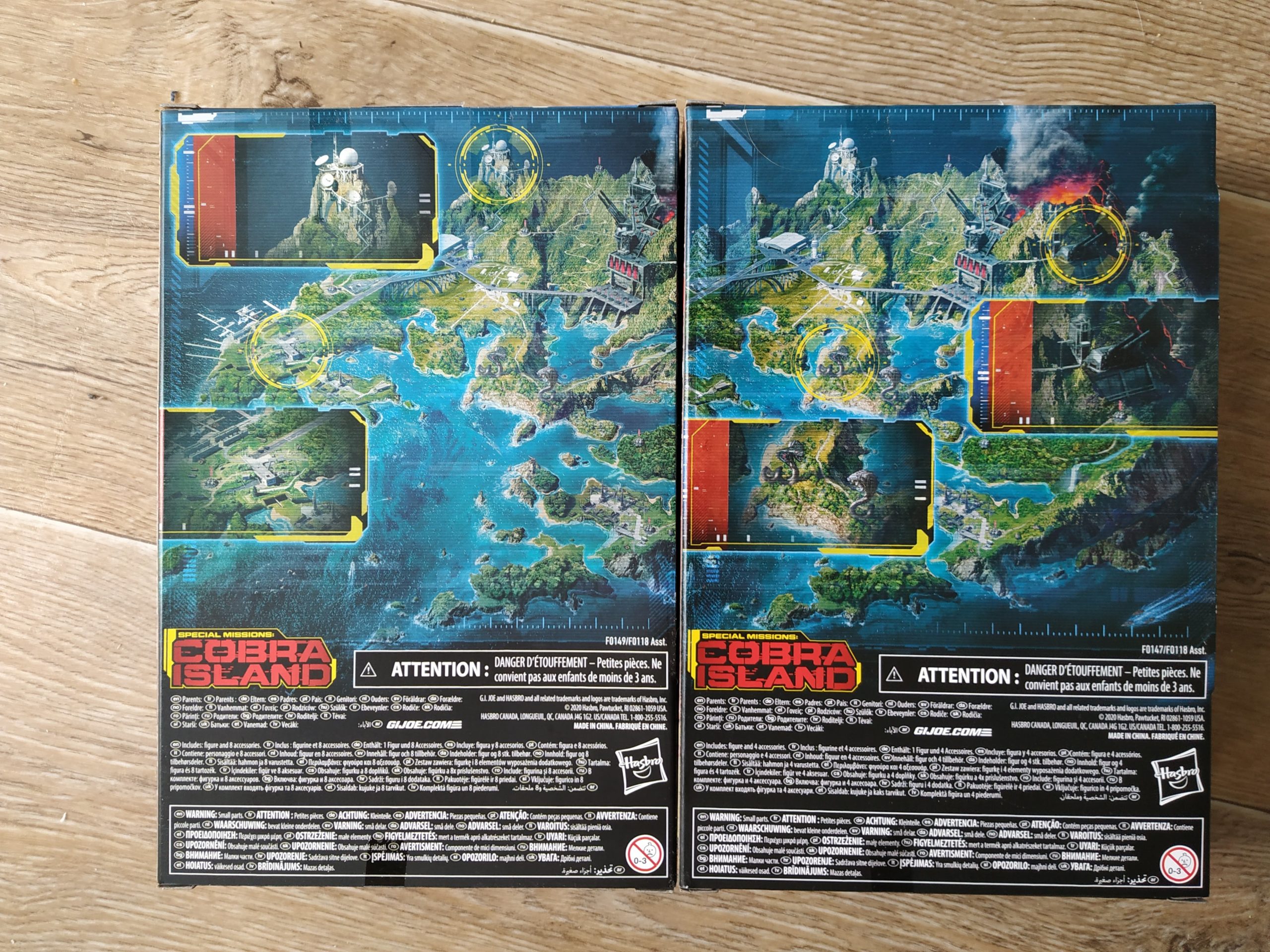 The back of the boxes for these figures features a depiction of Cobra Island (I’m not seeing a landlocked freighter). Interestingly, both show different details and a slightly different view of the island.

That’s it for now, I hope I can get back to you soon with more inches on the way…

Well I’m seeing all these pictures online of people showing off their new 6″ Joe figures. And I’m over here waiting for mine to arrive. I originally ordered the Limited Snake-Eyes version from Zavvi but they canceled my order without giving a reason. I then canceled my other pre-orders from them and found an online shop in the UK (In Demand Toys), that also did pre-orders. So I ordered Duke, Roadblock, Scarlett and Destro with them. Sadly, they didn’t have the Limited Snake-Eyes version on pre-order. Currently, they’re sticking with a shipping date somewhere in August, so I’m hoping to get them around my birthday.

In the mean time, Hasbro has released the regular version of Snake-Eyes through the Hasbro Pulse site, which doesn’t offer international shipping. I did manage to persuade one of my US colleagues to initiate the pre-order for me and then ship it over here once it’s available. I don’t really like doing it this way, but it’s looking like this will be the only way I’ll be getting some stuff from the US over here. There’s so many stuff I’d like to buy, but I don’t feel comfortable asking them to ship stuff to me all the time, so occasionally I dare to ask it, but most of the times I just wait on eBay sales or until someone sells it on Facebook or – and this is a very big stretch – some store over here sells it or ships to here (for a reasonable price).

This being said. I’ll see you back soon for the continuation of the Impel Trading Cards or just another update on the collection.