Convince me otherwise. You can’t. I know. Don’t sweat it. Give in to it and become an art collector as well.

In preparation of the previous blog post on the Marvel ARAH Special Missions #1, I came across the website of artist Mike Zeck, who did the cover art for that issue. As it happens, he is selling some Joe prints in his shop and naturally I placed an order. Below you can see the prints I got. They were shipped in very sturdy packaging and very fast considering they had to travel halfway across the globe to get here.

Anyway, check out his site and shop for yourself and order some of these gorgeous prints for your mancave, study, living room or art wall. Visit the site on https://www.mikezeck.com/shop. 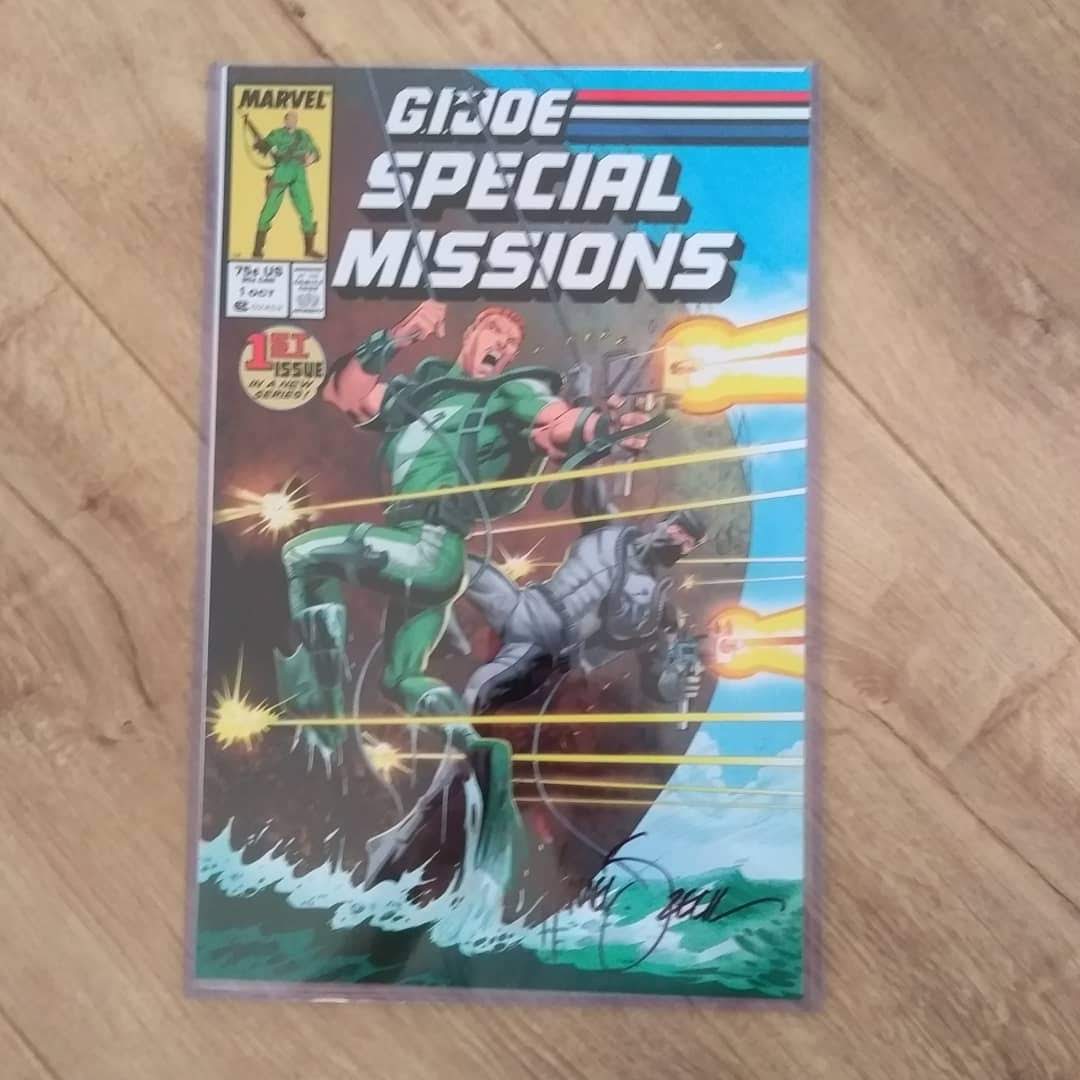 This is just iconic! Check out the last post where I go into more detail about this Special Mission. 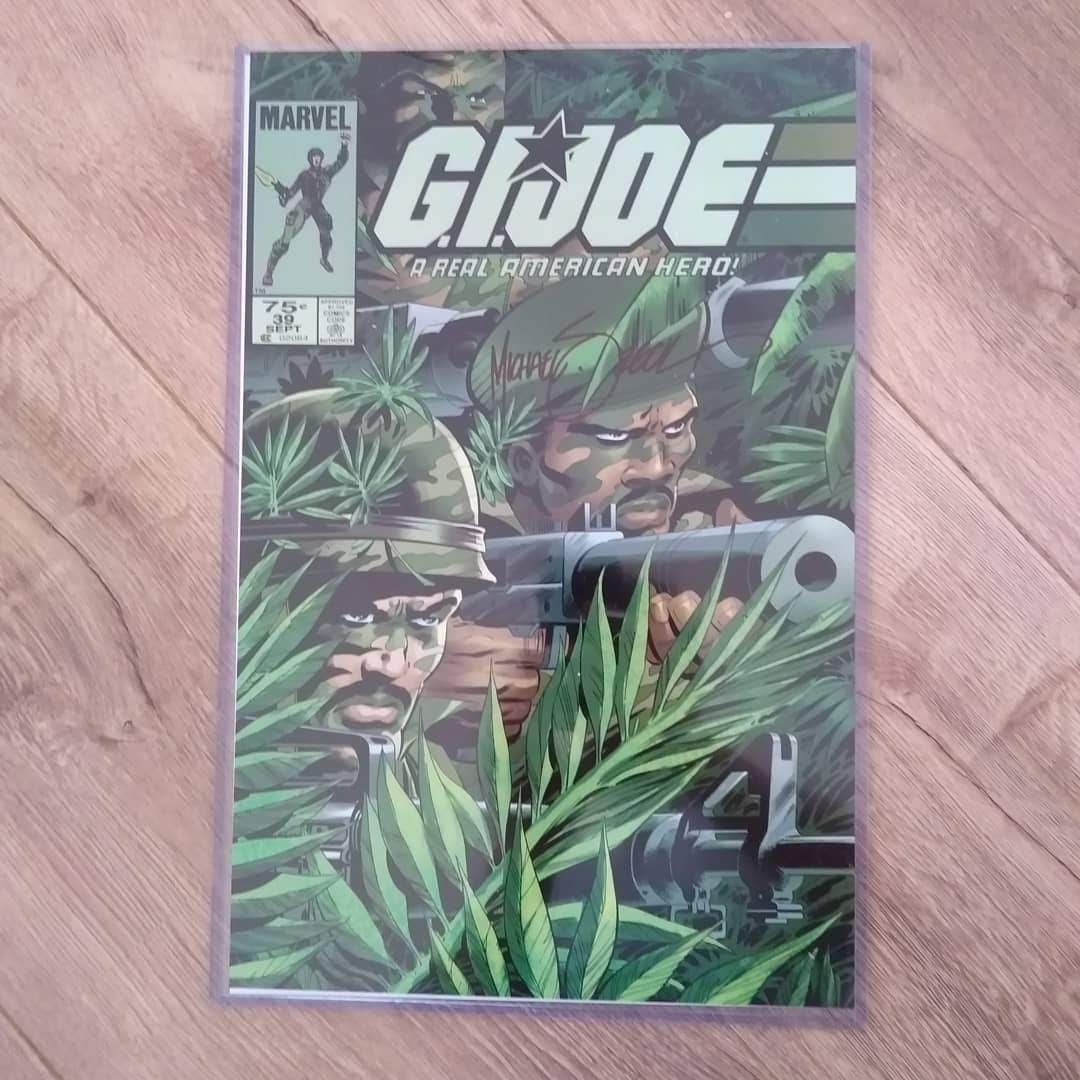 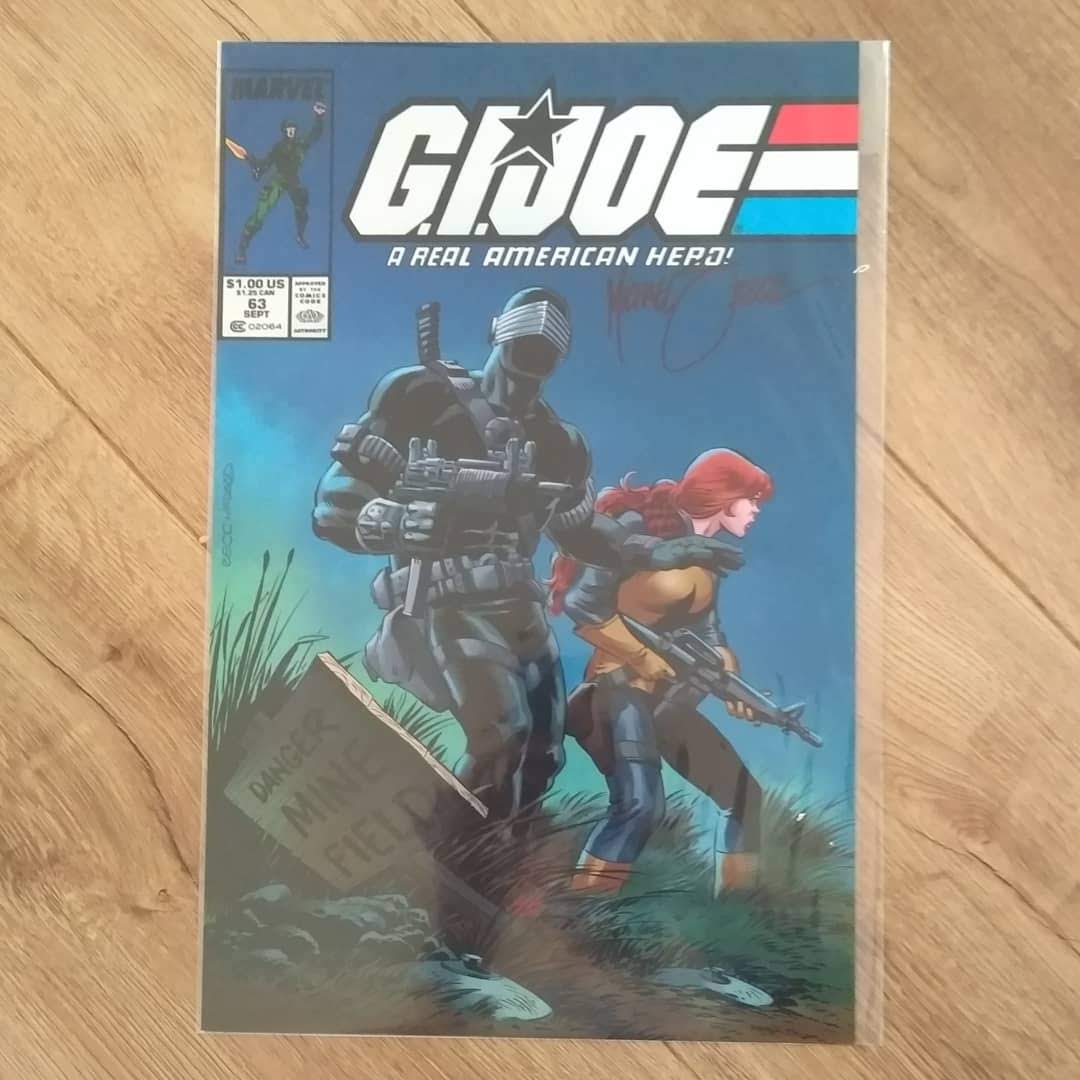 Snake and Scars… A better couple than Kim & Kanye if you ask me. 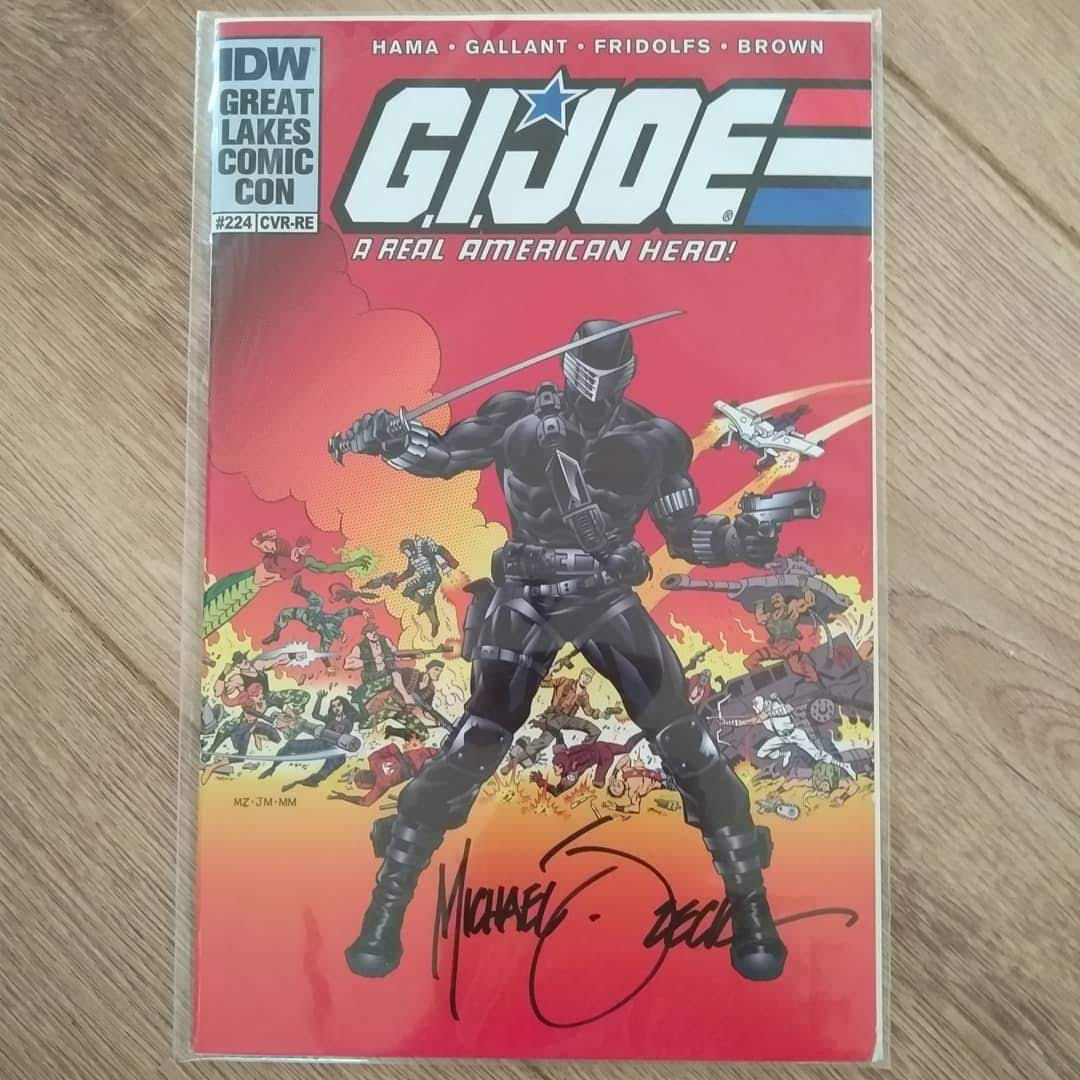 Let me end by saying that this post is not sponsored in any way. I’m doing this all for the love of Joe (boy, that doesn’t sound as good as I thought it would) and my love for fine art! Support your local comic book shops and the artists bringing you joy and fun every Wednesday!

We’re entering a new phase. The cards no longer focus on just one character, well, they still do, but only on the back. The front of the next cards each display a cover from the Marvel Special Missions, and the character on the back plays a (big) part in the featured comic. We’ll discuss each story and take a look at the character that was placed in the spotlight.
The Special Missions series ran from 1986 through 1989 and consisted of 28 issues. The stories could be read separately, but they were connected to the main ARAH continuity. What better way to start this mini-series with #1 of the Special Missions? I have to admit, starting with any other issue would be rather foolish. Anyway, this is Impel Trading Card #83, featuring Special Missions #1, That Sinking Feeling. 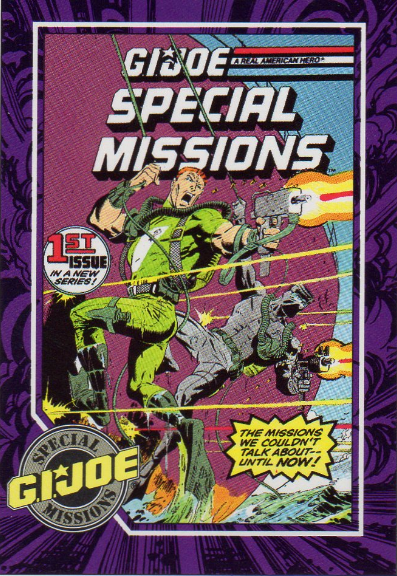 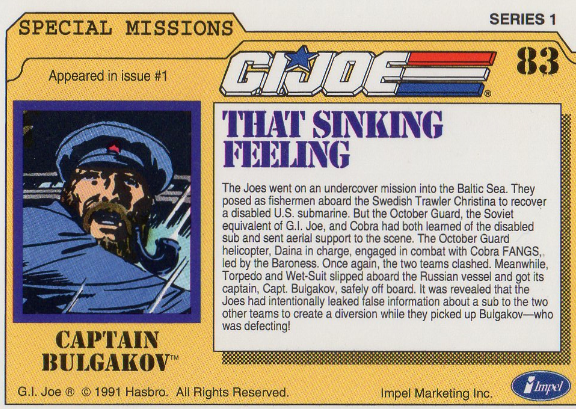 The cover for this issues is also used as the cover for the TPB of the Special Missions. As a kid (I must have been 12-13), I found my first G.I.Joe comic book in a bargain bin during our local Comic Book Festival. Now, don’t confuse/compare this with/to a Comic Con, first of Belgian comics (a.k.a. strips) != comics and the Festival is more of an expo with cardboard cutouts of comic book figures and then a sales room and an artist alley. All-in-all, nothing spectacular, but they always did get the most well known Belgian & French artists over to sign/draw. I used to go there every year and on one of my visits I browsed through the comic books bargain bin. I had a few comics back then, some single issues of ALF and TMNT – both in Dutch – from when I was a kid. Just a few issues, non-sequential and so I never got to find out the rest of the story or how it all started. That was the reason I looked through them that day. I didn’t find any of those comics, but I did find the G.I. Joe Special Missions TPB #5. At that time, I was still playing with my Joes. I had some of the cartoons on VHS (also in Dutch), but had absolutely no idea there was a comic book series (don’t judge me, this was before the internet). Needless to say, it was an instant buy for me. Quite a bargain too, I believe I paid about 100 Belgian Franks (about $3). I guess you could say that this was the start of my collector’s life.
The Festival was organized by the Comic Book Library/Store in my home town. Yes, a library foremost. And you needed to be a paid member to lend the comic books. They had mostly Belgian strips, but they also had a few comic book racks… all in Dutch. After the Festival, I went over there and found out they only had the TPB #4 in stock. And only for lending, it was not for sale :-(. I registered as a paid member and lend the TPB a few times so I’d have some more comics to read. The next year, they sold it off in the bargain bin on the Festival. So, now I had 2 TPBs. It took me a few years and a lot of searching online (hooray for the internet!), but I finally managed to track down the other TPB’s and even the single issue comics that got released/translated as well. We got 19 issues in the series, and not all covers are the same as the original series. For more details, check out YoJoe.com.By this time, I had already discovered that the Special Missions were a spin-off of the Marvel ARAH run and started buying those as well. Then there were the DDP issues and … well, let’s just say that I have a pretty complete G.I.Joe comic book collection. And it’s still growing.
Wow, that was quite the sidetrack. Let’s get back to the cover at hand.
The cover art for issue #1 is done by Mike Zeck and John R. Beatty, the story by Larry Hama and the art is by Herb Trimpe.Browsing the interwebs, I came across Mike Zeck’s webpage and found out that he is selling art prints of some of his Joe covers. It didn’t take me too long to place an order and I hope to write a post about them soon (Spoiler. One of them is this cover!). 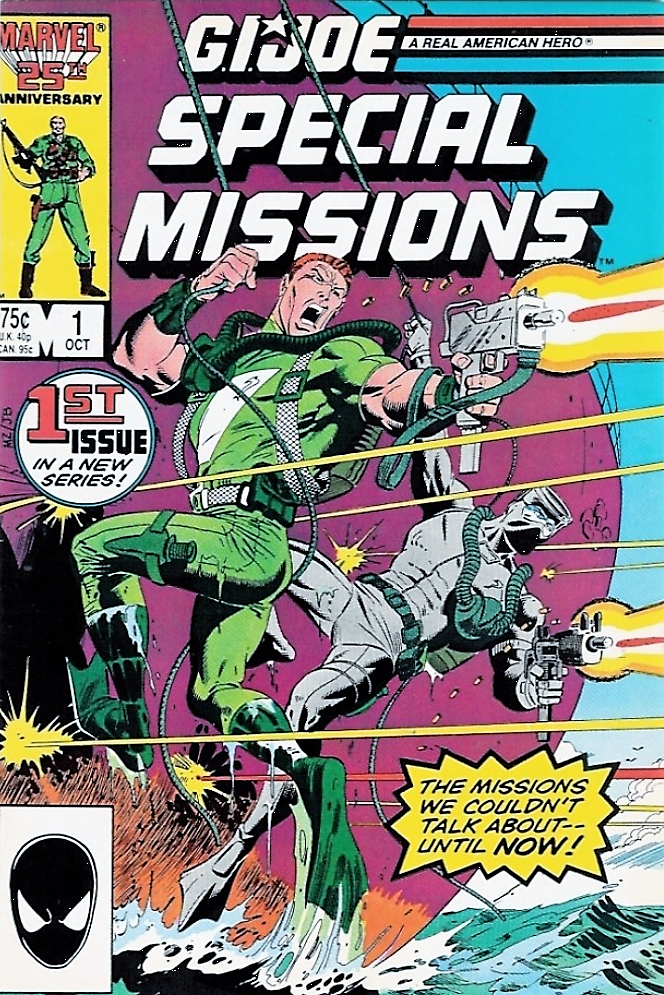 The story begins in the Baltic Sea where we see a Swedish fisher’s boat being investigated by the October Guard. Apparently the Russians have detailed dossiers on the Joes and Colonel Brekhov, aboard the Hind piloted by Daina, is able to recognize some of the undercover Joes. The Joe team consists of Shipwreck, Cutter, Deep Six, Torpedo and Wet Suit, all posing as Swedish fishermen. As the Hind takes another pass, 3 Cobra FANGs approach. The Baroness, escorted by two Cobra Troopers (a.k.a. cannon fodder), is assaulting the October Guard’s helicopter. Both support FANGs are destroyed and the Hind is crippled, but both them and the Baroness escape the fight. 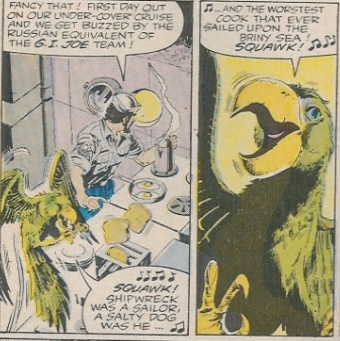 After the shooting, Deep Six takes out the SHARC with a live video connection to the surface. Meanwhile, Daina and Brekhov crash/land the Hind on the Russian Navy frigate, Udaloy. The Baroness crashes into the ocean near a Cobra hydrofoil with Firefly and a group of Eels. Both sides conclude that the Joes’ presence is proof that there is disabled submarine on the bottom of the sea. They both decide to engage the Joes. The Russian’s Captain Bulgakov asks the Joes to surrender, but in the mean time, Horrorshow and Daina are diving towards the SHARC to tap into the video feed. Daina then goes on to attack Cobra and Horrorshow dives deeper down to locate the submarine. Meanwhile, the Baroness send 2 Eels to board the Udaloy, the Russian frigate. On board, they overhear Schrage and Bulgakov discussing the video feed and they confirm the finding to the Baroness.
On the deck of the Udaloy, the fighting starts. Daina fights the Baroness on the Hydrofoil and Horrorshow gets knocked out by Deep Six when he discovers the SHARC’s video tape recorder. The Hydrofoil crashes into the Udaloy after Daina got kicked into the water. Firefly and the Baroness to join the Eels in the fight with Brekhov, Stormavik and Schrage. Daina made her way back to the aft deck of the frigate and takes out the Eels with her sniper rifle. During the fight, Torpedo and Wet-Suit climb aboard on the other side of the ship and walk up to Bulgakov on the bridge. 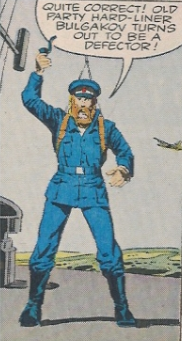 The Baroness and Firefly are losing the fight and Colonel Brekhov asks them to surrender. Then a Cobra submarine surfaces and Destro appears. He explains that there is no American submarine stranded on the bottom of the Baltic Sea. It was all a hoax set up by the Joes to enable a defector to cross over. On the top of the bridge, Captain Bulgakov is standing by wearing a STABO harness and while he explains his motives, Wild Bill and Hawk are flying over in a C-130 to pick him up. Destro’s troops try to shoot at Bulgakov as the Joes sweep him off the ship, but to no avail, they were already to far away.
The fighting stops and the Joes throw Horrorshow back into the water as the October Guard kick the Baroness and Firefly off their ship. The Joes have accomplished their mission without firing a single shot.

Normally, I’d be finding some cryptic way of teasing what the next post is going to be about, but you can probably guess it. Anyway, did I mention before that these Special Missions are some of my favorite stories? Probably a few times already. But let’s face it, they are great stories. I can’t wait to get back to reading the next issues and write about them. Especially the next one… I might have mentioned this one before a while back. (see #48 – Clutch).
See you later! Happy Collecting and YoJoe!