You all remember the quote from the cartoon: ‘G.I. Joe will return after these messages.’. Well, it took a while, but it seems that the messages are over now. What a few weeks this have been. As a collector, I’m glad to see so much new toys coming our way (hopefully). I’ve been holding of on this post for a while now, but I guess I’ll have to get my take out on all the latest news.

To kick things of, we got the Snake-Eyes Deluxe which was a Hasbro Pulse exclusive. I happened to stumble across a European site where I could pre-order, only to have my pre-order canceled soon after… and too late to get it from anywhere else for a reasonable price. I’ve been following the prices on eBay for this set and they are going for $100 – $500, pretty insane and frankly too rich for my taste. I’ll keep looking occasionally, but I guess this one will be the Joe that got away… The figure itself looks really nice and the tons of accessories sure would make one hell of a display, but hey, I’m not one to dwell on missing out on this one (since they will release a regular version, more on that below). 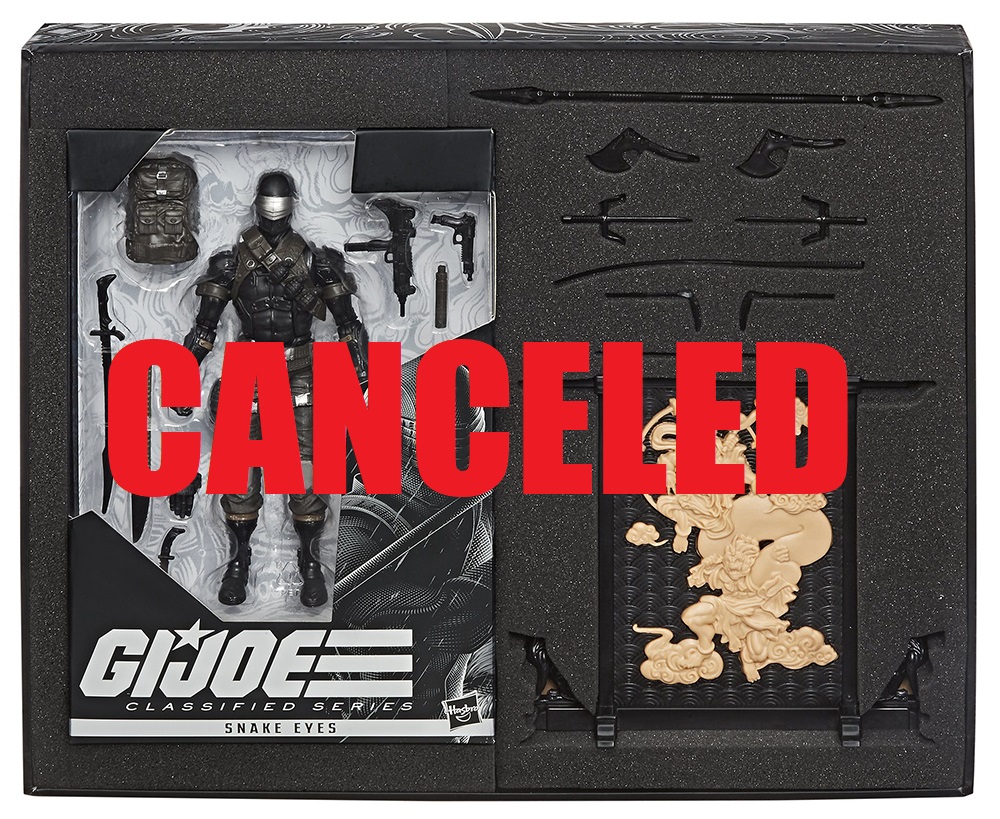 Next up we have Duke, Roadblock and Scarlett. Now, originally I pre-ordered them together with the Deluxe SE, but since they canceled that one, I canceled the others. I did find another EU (well, UK based actually, so that’s still Europe I guess, who knows these days) store that has pre-orders and good reviews! So I put in an order there for these 3 figures.

I think the Scarlett figure is the best one of the 3. I’m not quite sold on the headsculpts of Duke and Roadblock. The art for Duke is looking like it’s straight from an ARAH comic, a good thing if you ask me. Roadblock looks a bit surprised and Scarlett has some serious La Joconde (Da Vinci’s Mona Lisa) vibes. A very cute and mysterious smile, but probably very deadly as well.

As I was looking into pre-ordering the figures, the next figure was announced. Destro. He is one bad-ass looking figure. True to the original design from the 80’s, with his gold chain and golden gun. I knew at this time that I was going to invest in the 6″ line. The art is awesome (something that can be said for all the card art really, a tradition they set with the 3.75″ figures and I’m very glad to see it continues). I like the suitcase (although it could have been with a M.A.R.S. logo instead of the Cobra sigil?) and the futuristic looking laser gun (Han Solo vibes). Too bad the wrist rockets are not removable 🙂 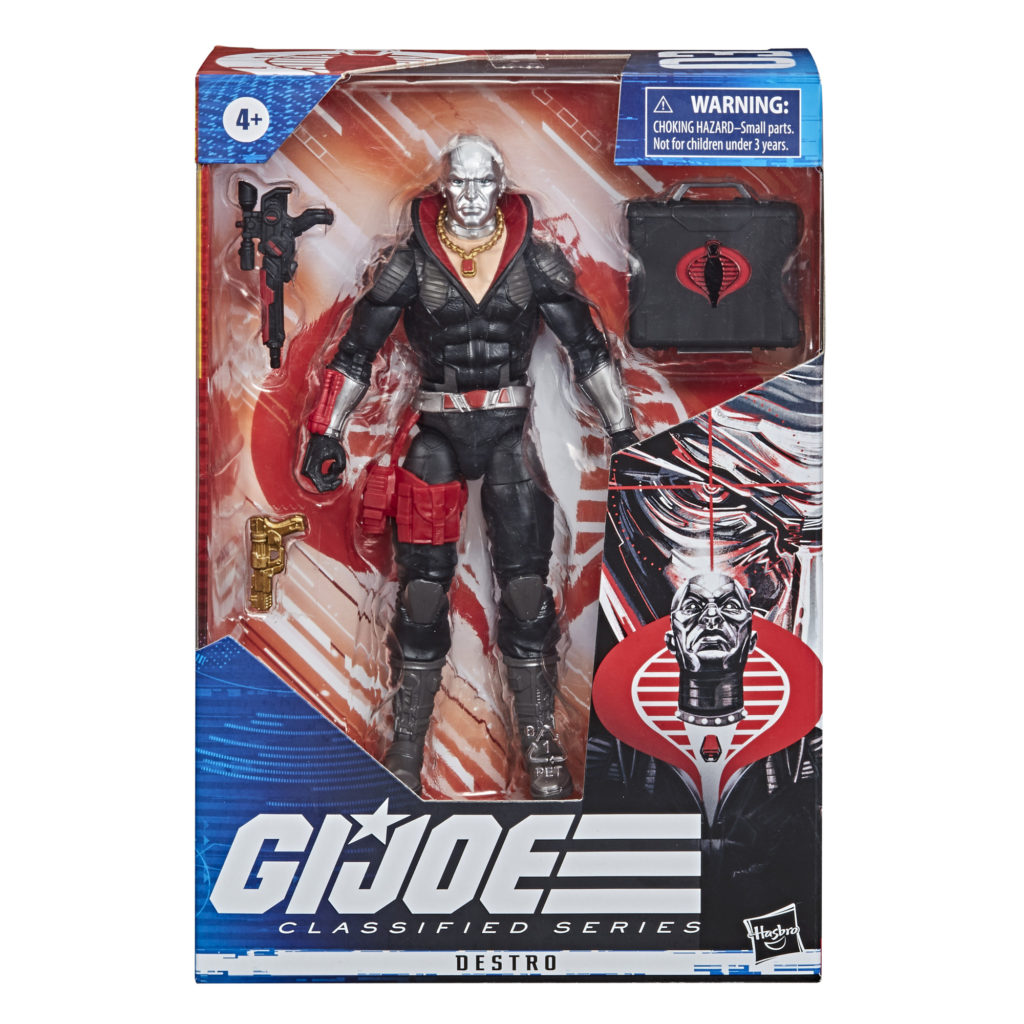 We then got even more news in the shape of a NTWRK exclusive Cobra Commander (I will not get started on that whole mess) and the regular Snake-Eyes, available through Hasbro Pulse. I tried to get the NTWRK Cobra Commander, but that didn’t work out. See, I kept it short. 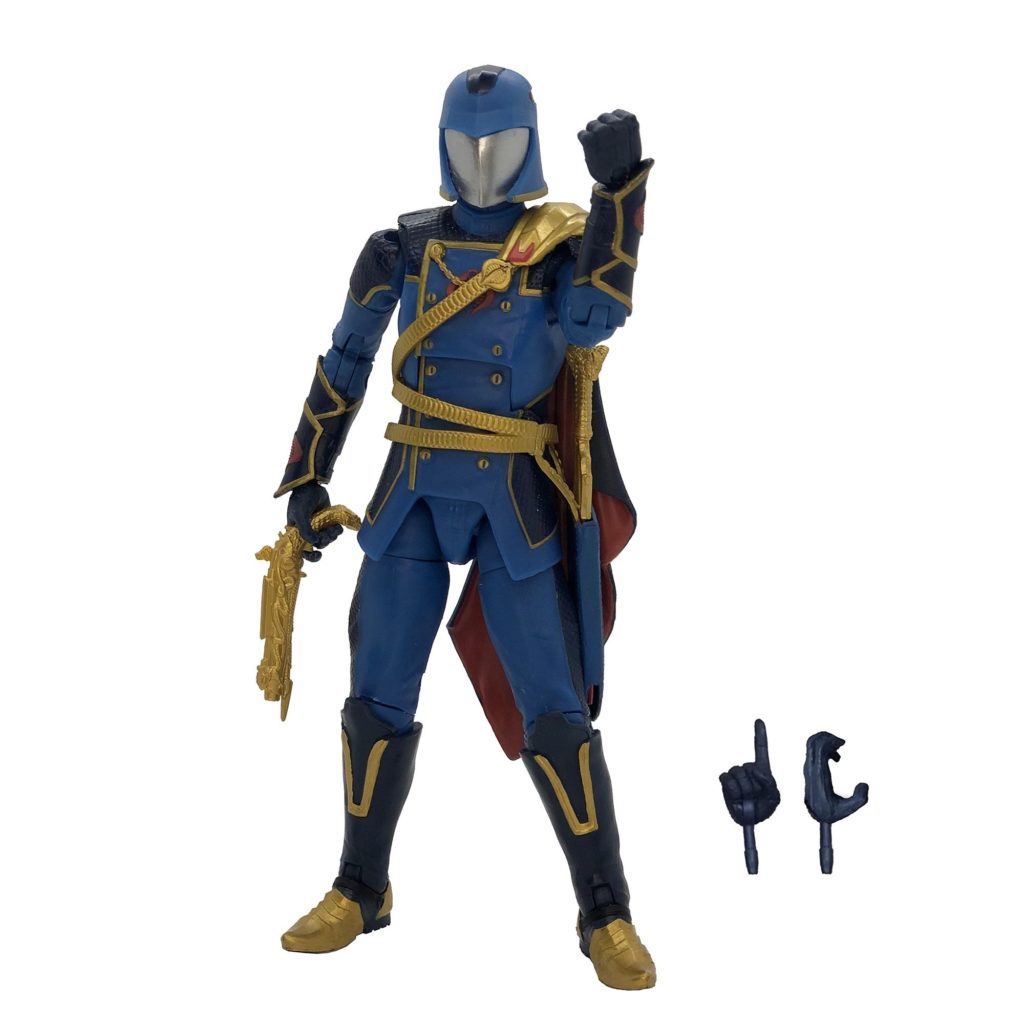 I do like the color scheme used on the Regal version of Cobra Commander, but those weapons are a bit over the top. I thought I was going to miss out on this one (the whole NTWRK debacle, seriously don’t get me started), but Hasbro later offered the figure on Hasbro Pulse and then I had to pull in some favors, but I managed to get a US colleague to order the figure for me. And not just this one, also the regular version of Snake-Eyes that was made available on Hasbro Pulse. 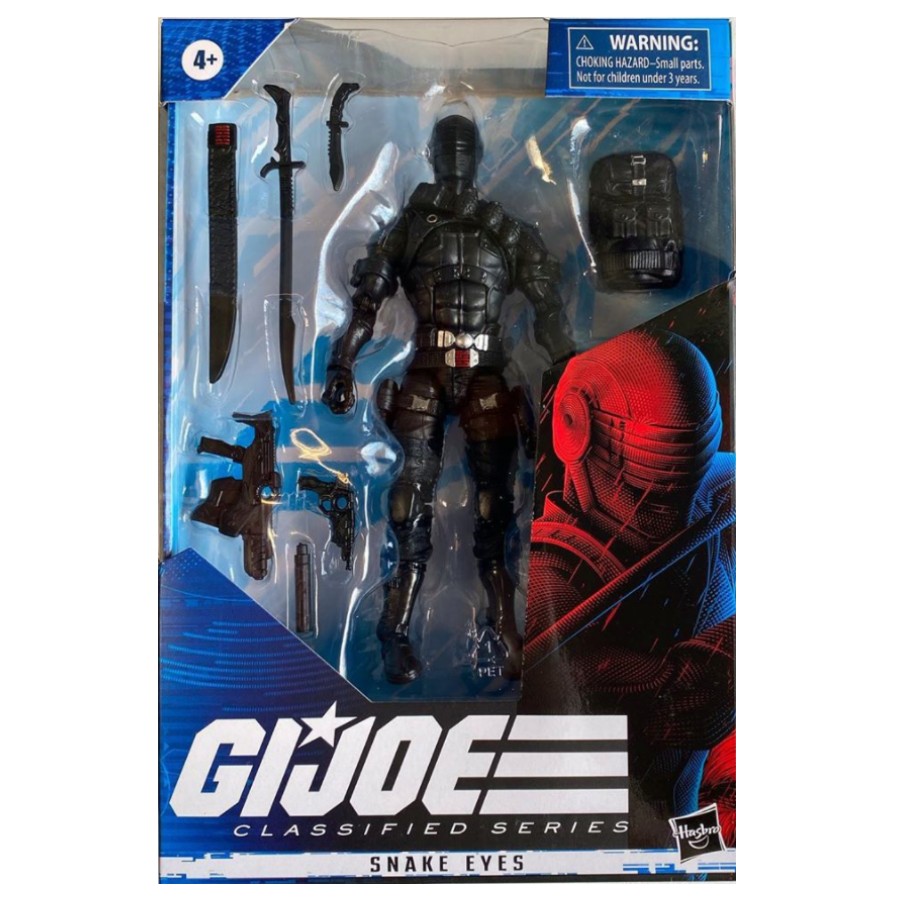 So even though I missed out on the Deluxe version, the deadly mysterious Ninja will be a part of my collection. This version may have less accessories, it’s still very cool looking and has plenty of features.

The fun doesn’t stop here, oh no, the good people over at Hasbro Pulse then gave us the Profit Director Destro figure! They really need to give the person that came up with “Profit Director” a raise, a promotion, a lot of credit. This figure truly is a gift to the adult collectors. Where the other figures could be seen as toys for kids (if they ever could get their hands on them), this figure definitely isn’t a toy. 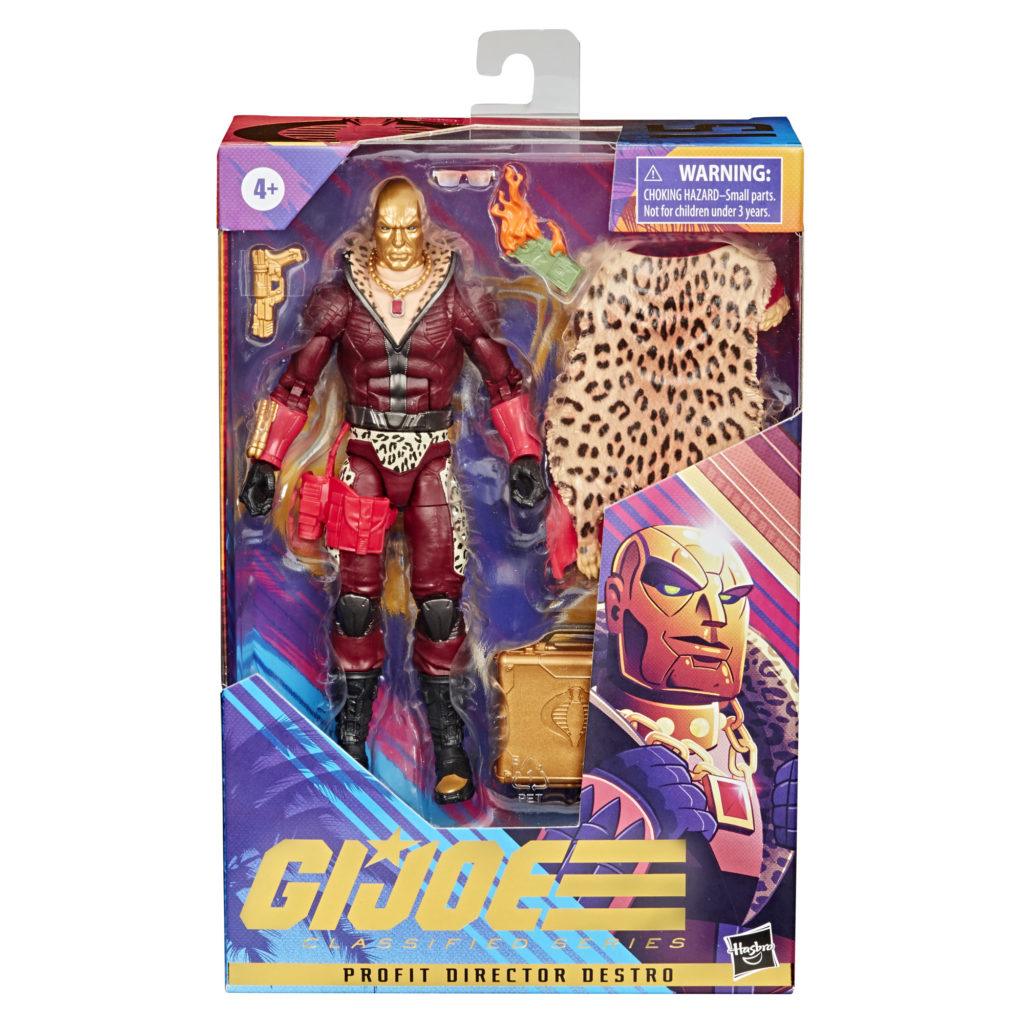 The gold head, the sunglasses, the leopard skin cape, the burning money. What’s not to love about this figure? This is just awesome and a beautiful homage to the 3.75″ figures and the collector’s community. I was able to convince my US colleague to order this one as well. Me = very happy!

And the figures keep on coming. They also announced Gung Ho, a regular Cobra Commander, a Red Ninja and Storm Shadow. For some reason, the Hasbro Pulse video on Facebook wasn’t working on my phone and I couldn’t follow the whole thing live. Luckily the community came to the rescue, or on Twitter and so I found out that these figures would be available through Amazon. I’ve ordered some things from the US Amazon before and they have a clear policy on shipping rates and taxes, so I went online and put in my orders.

A special mention goes to the Storm Shadow figure. His look is based on his v3 Ninja Force figure, and probably his best look, although the v2 look with the digital camouflage is also very good looking. 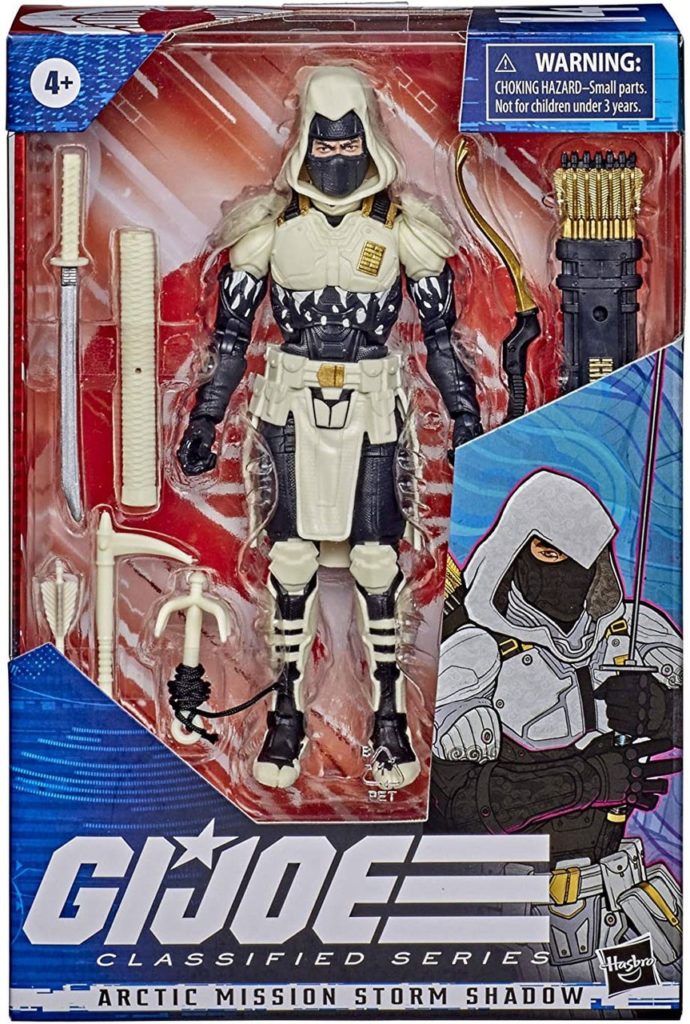 Just now, a new set of figures and a vehicle has been launched. These ones are Target exclusives and I’m afraid that I’m too late to get a pre-order with the UK store I have found. I’m quite gutted, because that Cobra Trooper and The Baroness are very cool looking. Beach Head is very true to his original figure (I love that beret) and the second version of Roadblock looks the part in his black and white shirt that incorporates the Joe’s star beautifully. Maybe I’ll get my chance on the waiting list or maybe these won’t sell for astronomical prices on eBay…

That’s it for the 6″ line. We then got the 3.75″ Retro line that kicked of with a bang to say the least. I guess we all knew they were going to start of with Snake-Eyes and Storm Shadow. The Baroness is a great addition though. The card art on these figures are updated versions of the original art and I’m not complaining. The figures themselves are great, however, I do have some issues. Snake-Eyes web gear that hangs between his legs is a bit silly and probably very unpractical for a ninja. Storm Shadow has sleeves! The plastic bubbles are a bit big but I guess that’s because they crammed in a lot of accessories, so nothing to complain about really. I can’t wait to see which figures are coming next. I’m still hoping on an updated Scoop with laptop, vlogging camera and green screen…

To top it off, Hasbro also revamped (somewhat) 2 vehicles as part of the Retro line. The H.I.S.S. tank on Cobra’s side and the A.W.E. Striker for G.I. Joe. I never had the original ones, so they will make a great addition to my collection.

There has been a lot of discussion online on the fact that the Retro line should have the O-ring figures, and I guess that I agree to a certain extend. On the other hand, I’m just very excited to be getting spanking brand new G.I. Joe toys in 3.75″ and I’m just sitting here smiling like a kid just thinking about getting my pre-order in and being able to have them in hand. I have to say that I still like the 3.75″ line better, but the 6″ figures are growing on me and I’m sure that they’ll get a nice place in my collection.

That’s it for now, quite a lengthy post, but then again, we have lots to talk about. There’s the new Snake-Eyes movie coming out, the new video game (Operation Blackout – set for release in October), and I’m pretty sure that there will be more new figures and vehicles to talk about. See you next time!