According to the dictionary, our featured Joe’s nickname means, the part of a vehicle’s load, especially an aircraft’s, from which revenue is derived. Still, not the worst codename in the team, Hit and Run anyone? Anyway, here’s Impel Trading Card #63, Payload. 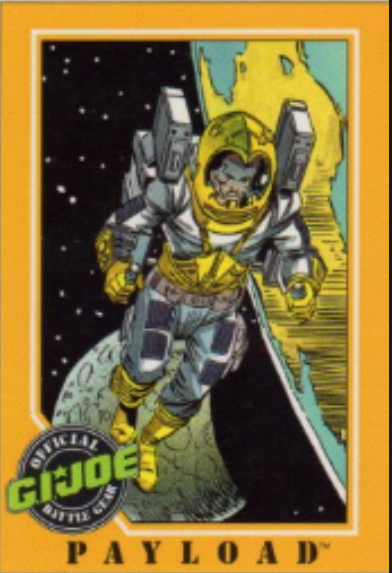 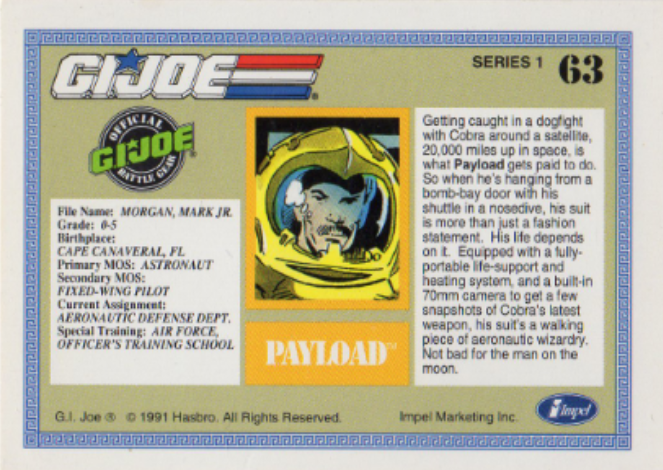 While Snake-Eyes is throwing knives at a giant wheel that has Scarlett bound to it and standing on top of Blind Master’s shoulders who himself is balancing on a large ball while juggling with working chainsaws, Payload is in a space fight with Fred VII over some spy satellites. I guess it was one of the few times Cobra actually scored a win. They destroyed the spy satellites – so they couldn’t pick up on the Terror Dromes –  and crippled the Joe’s Defiant space shuttle.

There have been 5 figures released bearing the Payload name. The first one released in 1987 with the massive Defiant Space Vehicle Complex. v2 was a repaint of that first figure and came with the 1989 Crusader Space Shuttle. The next 3 figures were released in quick succession, in 1993 and 1994, as part of the Star Brigade subteam. All 3 being just a repaint of the same mold (used before as the Eco-Warriors’ Barbecue figure).