With a title like that, one might think we’ll talk about the Donald again, but no, this time we take a look at the Impel Trading Card #36 featuring the ever charming Baroness. 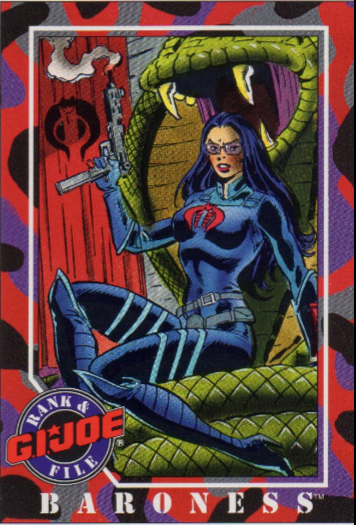 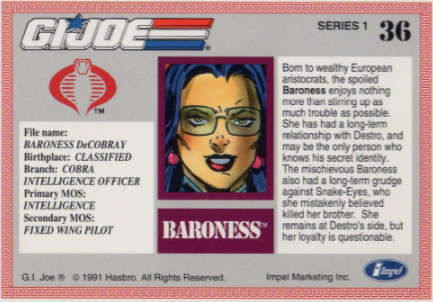 I can’t help but notice there is a trend within Cobra to employ a European specialist to do the dirty work. Right from the get-go, we have the Baroness, who is European Aristocracy. Another specialist was introduced in Destro as the arms dealer, but in the first place as just that, a specialist. The Crimson Twins are Corsican Maffia, Major Bludd is an Australian poet who kills (language mostly – occasionally a Green Shirt :-)), the Dreadnoks are Australian too, … Basically, most of the worst people in the Joeverse are foreigners. I’m not saying that it’s racist or that they have come to take the terrorist jobs from the hard working American people. Just stating the obvious. True story!

Now, let’s get back to the lady of the day. Baroness Anastasia Cisarnova or De Cobray, whatever you prefer. We first meet the Baroness in issue #1 of the Marvel ARAH series. She is the one who kidnaps Dr. Adele Burkhart. Later in the issue, she uses her disguising skills to trick the Joes into thinking she is Dr. Burkhart. Inevitably she escapes with Cobra Commander to plot away at another world domination scheme. 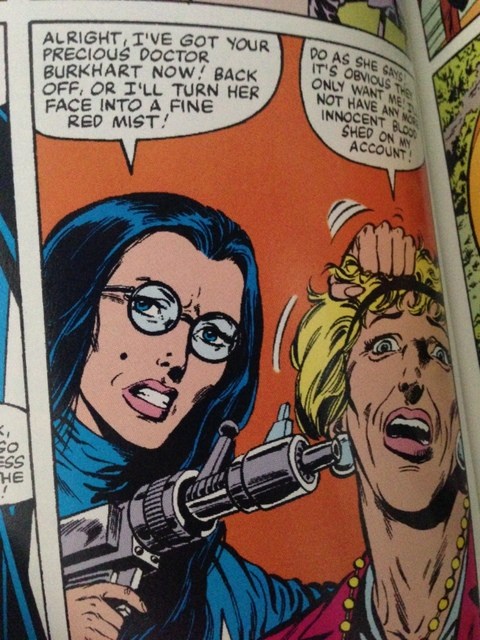 While we don’t get a lot of background story on the Baroness, we know she has a strong connection with Destro, even from before he became an active member of Cobra. Later on in the comics, we get to see the history of the Baroness and Snake Eyes. As a young girl, she was confronted with the death of her brother. When she arrives at the scene, the soldier who would become Snake Eyes, had rushed in when he heard the shots. Seeing the soldier with a loaded gun standing over her dead brother, the Baroness assumes he was the killer. 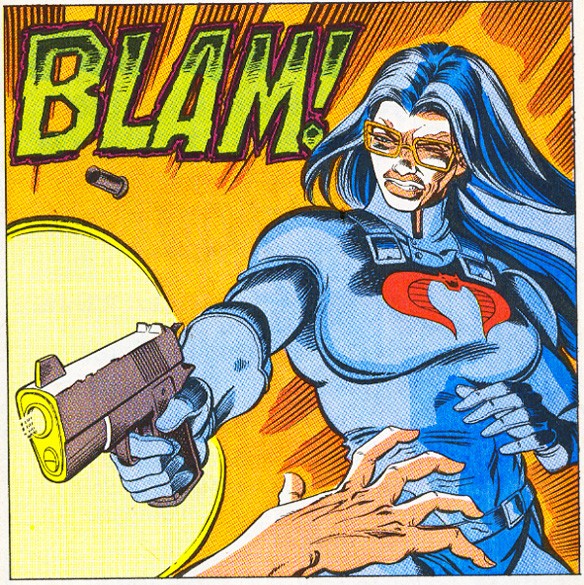 Years later, when she is working for Cobra, she succeeds in kidnapping Snake Eyes when he is recovering from yet another plastic surgery to restore his face. The Baroness even shoots Scarlett, leaving her in a coma. Upon his escape, Snake Eyes speaks for the first (and only) time in the ARAH run, uttering the name of his beloved redhead. Scarlett awakes from her coma and is back her badass self.

The Baroness is featured in both the Sunbow and the DIC cartoon. In the DIC series, she rescues the Commander from a life of being the pet of Serpentor and is able to return him to sort-of human. Destro left her for Zarana (mid-life crisis anyone) but doesn’t need a lot of persuasions to dump the pink haired Dreadnok and return to his beloved Baroness. 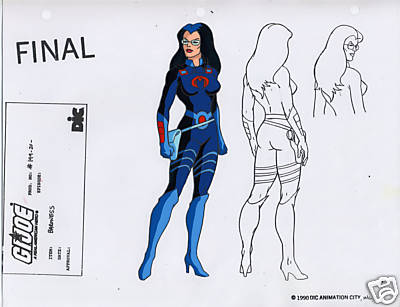 My favorite Baroness is the one from Renegades. She is a corporate figure and does PR for the somewhat legit Cobra Industries. At the end of the series (and show 🙁 Will this be the Firefly of Joe fans?), she is sucked into the wormhole that was generated by the destroyed M.A.S.S. device. I just hope she’s fine, wherever she is. 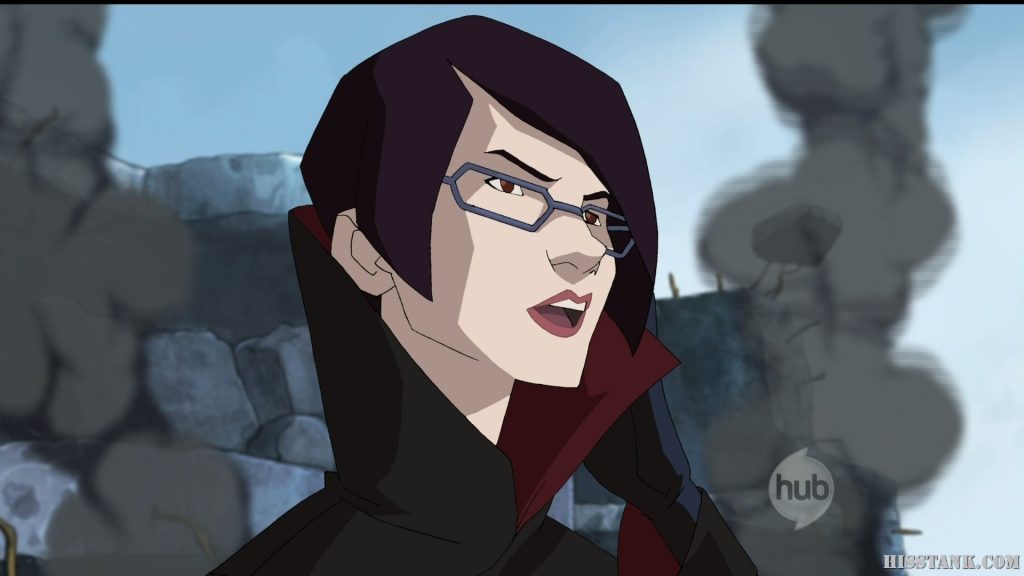 I guess we now should discuss the movie. They turned her blonde! Nuff said. Moving on.

There are a few fans out there that cosplay as Joes or Cobras. A character like the Baroness is very suitable for cosplay. Sexy yet sophisticated, ruthless but pleasing to look at. I’ll leave you to google for some of the cosplay pics available out there on the world wide web. Shout out to @CobraNorth. Let me share you one, miss Leah Burroughs as the sexy Baroness of your dreams – or nightmares… 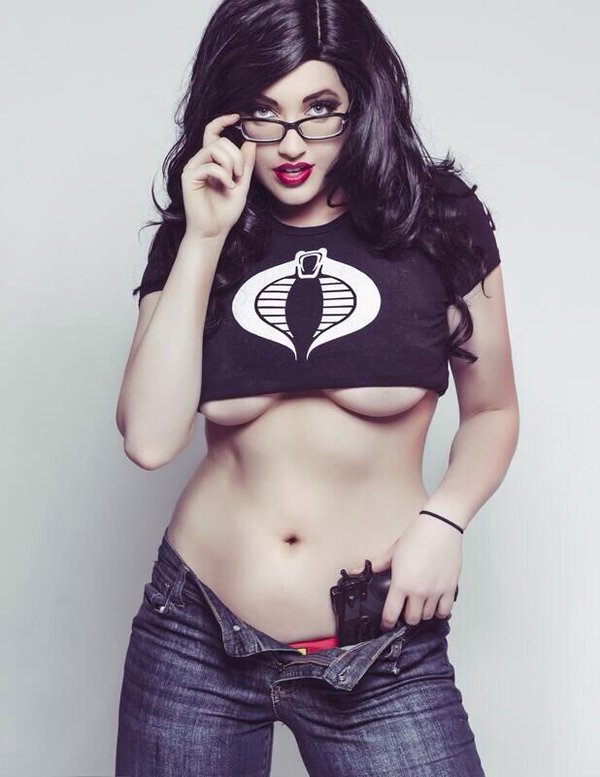 That’s all for this post (are you even reading this or still looking at the picture above?).

Join me next time when we take on the next card in this series. Hold on to your monocle.