Rather than going for the same old title, Impel Trading Card #26, I thought I’d go back to ‘somewhat mysterious yet totally understandable for Joe fans’ titles. I also tried to add a bit of structure to the post, let me know what you think.

Now, without further ado, here is card #26, Spirit (the G.I. Joe that will later be known as Spirit Iron-Knife). 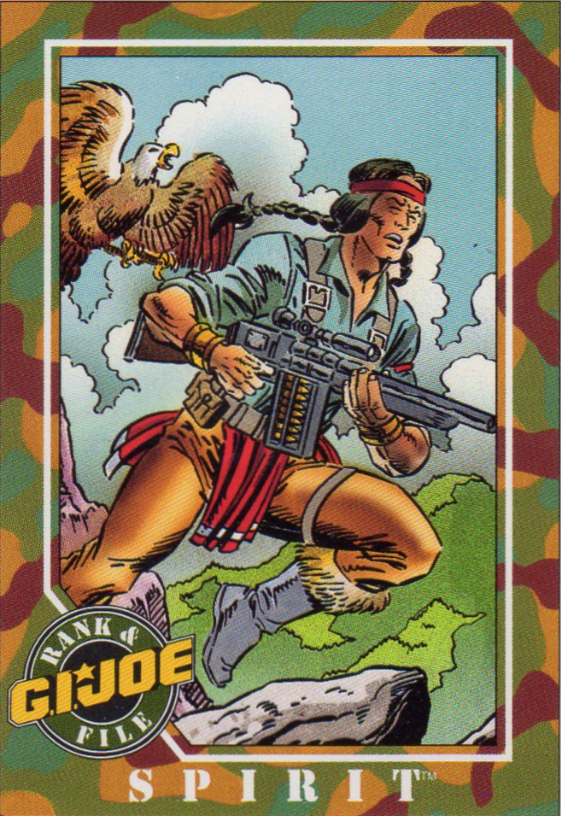 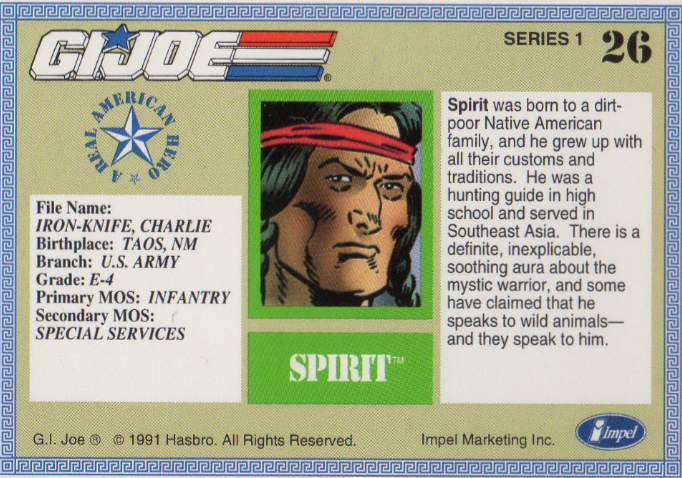 Between 1984 and 1993, the figure was called Spirit. During this time, 4 iterations were released. I don’t have the original figure (depicted here on the card), my first Spirit figure was the 1989 figure that was part of the Slaughter’s Marauders sub-line. I had a few figures of the Marauders, but I’ve always found the colors to be very bright. I did however like the eagle Freedom that was included with the figure and the fact that he was a Native American. I do remember that his hair came off quite easily and that I needed to glue the hairpiece back on.

I recently acquired the 1992 version that was part of the Air Commandos subset. This time, his hair is tied in a single ponytail with a red and white hairband. And this time, the hair didn’t come off. He came with the G.I. Joe glider, star-spangled in red, white and blue. Easily the best looking glider of the set.

From 2005 onward, Hasbro changed the name of Spirit to Spirit Iron-Knife. So he got his own last name added to his code name. Not very secretive… There are 6 figures released under the new Spirit Iron-Knife name. From those last figures, I only have the first one (2005) in my collection. After 1995, it became very difficult to find any Joes around here in the shops. The internet was not yet the big shopping mall it is today and so my collection didn’t grow anymore – apart from some of the older toys I could find on flea markets.

In the Comic Books, the first image I remember of Spirit is that he is the one who was sitting on top of the entrance to the (new) Pit. Doing some research for this post, Spirit appears quite a lot earlier in the comics. He was assigned – with Airborne, a fellow Native American – to guard Snake Eyes in his cabin back in issue #31. He also plays a big part in the Millville story, where he and Mutt visit Mutt’s uncle when Cobra swoops in to town and brainwashes most of the people there.

In the cartoon series, Spirit takes over the role from Snake Eyes in the everlasting duel with Storm Shadow. I never really understood as to how a Native American Shaman could be a match for a highly skilled ninja. The only explanation I can find, is that it’s hard to have a character not talking in a cartoon. Probably the same reason why they introduced Duke and Scarlett as having a fling in the cartoon, rather than the Snakelett (ScarEyes sounds to creepy) we all love.

Naturally, Spirit also used his knowledge to inform us in one of the legendary PSA shorts, What to do if you catch fire? Check it out below. Now you know, and knowing is half the battle.

That’s all for now. Next time, we’ll go deeper…