We have dived and have arrived. Card #27 is up today and let’s not get astray. Rhyming like I’m Roadblock, just cause I’ve got writer’s block. Playing on you some mind tricks cause this post features Deep Six. 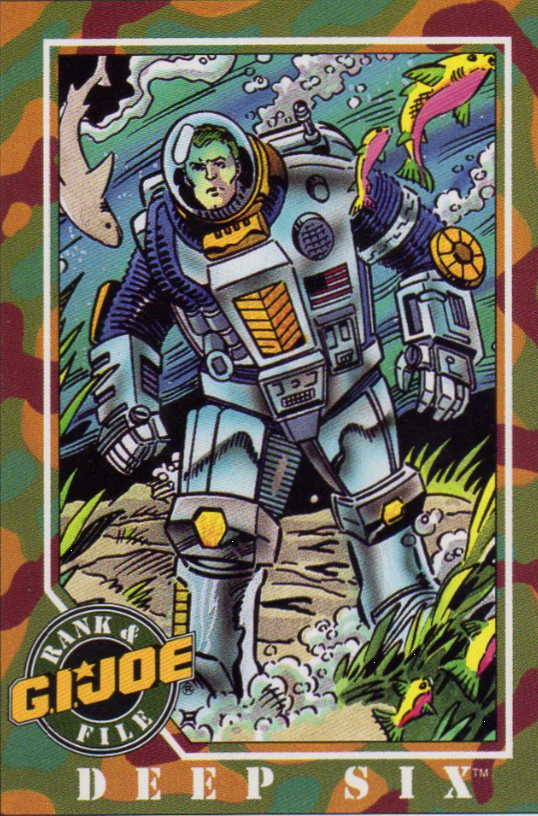 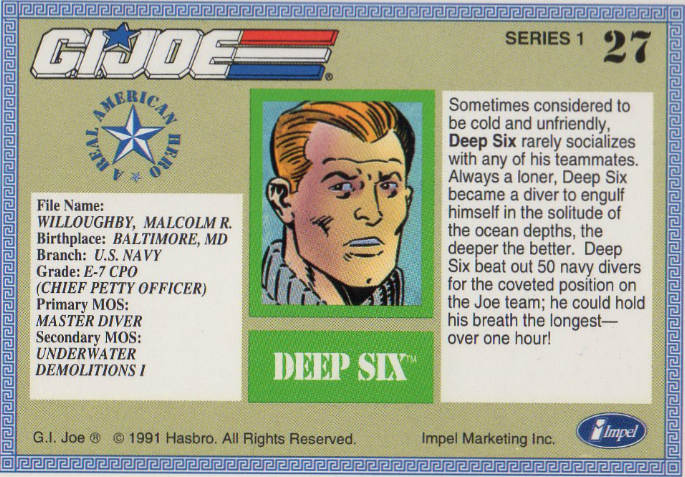 His filecard describes Deep Six as being a social loner within the Joe team. I can only guess, but I guess it has something to do with his high-pressure diving suit. Being locked into that probably feels like being in a coffin. Claustrophobic anyone?

The toy figure is undoubtedly the least articulate Joe figure of all time. Not counting the dogs, wolfs and parrots 🙂 It was released with the S.H.A.R.C. vehicle, some sort of crossover between a fighter jet and a one-man submarine. I really do like the S.H.A.R.C. as a toy, it’s versatile and not too big, nor too small. The Deep Six, however, is not one of my favorites. I didn’t have the original 1984 figure, but the 1989 one with the bright orange helmet. I always saw G.I. Joe as sci-fi, but then in the not so distant future (as they put it in the movies). Why would you have a guy in a big metal suit in which he can hardly move in a high-tech team? Same goes for the 1989 figure, his diving suit offers more maneuverability, but it still looks more steampunk than G.I. Joe worthy.  Then came the 1992 Eco-Warriors figure that was released with the dolphin Finback. He had a more futuristic look and finally looked in place with the Joes, albeit in bright colors.

That’s it for now. Next time we will explore the shadows of Japan… Mysterious, right?