I get up, and nothing gets me down You got it tough. I’ve seen the toughest around And I know, baby, just how you feel You’ve got to roll with the punches to get to what’s real.

Welcome back! I’ve been recovering from a back injury and haven’t had the time nor longing to write some. But I’m getting better now and so here we are again with a new post.

In the last 2 posts, we tackled the Original Joe team and the 2 Cobra infantry soldiers. This time around we take a look at the 1982 vehicles, displayed on the Impel Trading Cards #54 through #60. As with most of the original figures, I don’t have a lot of these in my collection. Let’s jump right into it, with #54 the J.U.M.P. Jet-pack. 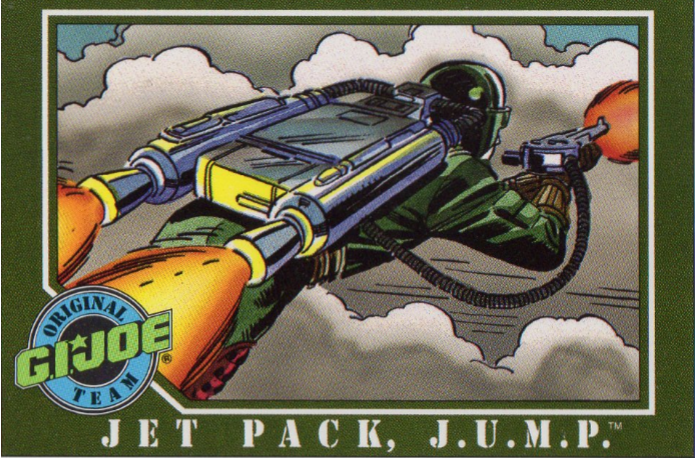 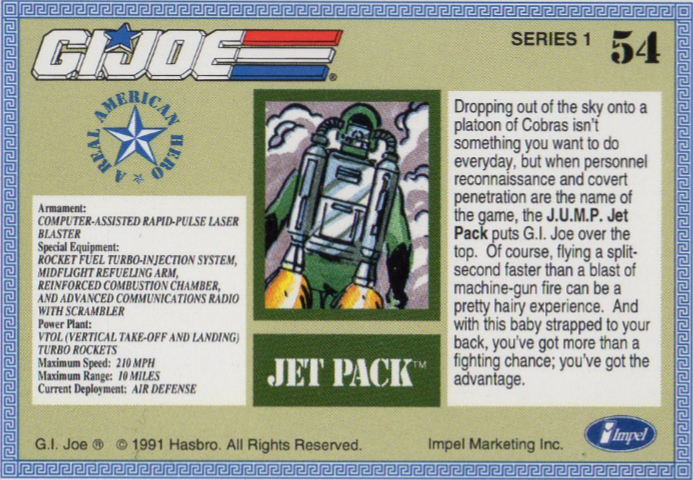 The J.U.M.P. Jet-pack, giving your Joes wings since 1982. And probably some very serious burns and loss of legs… I definitely can see the charm of being able to fly to do recon or even attack the enemy. But this just isn’t practical. Not alone the safety issues (these people are professional soldiers, they can handle the heat), but the maximum range is only 10 miles and with a top speed of 210 MPH, this means about 3 minutes of flight time… (I know I’m ignoring acceleration, elevation and well, physics really, but it’s G.I.Joe, they’re above all that). The toy was released in 1982 without a figure – smart marketing if you ask me. That way you should buy multiple Jet-packs for all your Joes 🙂 The next year, Grand-Slam was included in the package. He was depicted with the J.U.M.P. Jet-pack on card #50. The J.U.M.P. Jet-pack was used in the cartoons and the movie. Just wanted to mention this to link to the intro on Youtube again… Gotta love that intro. 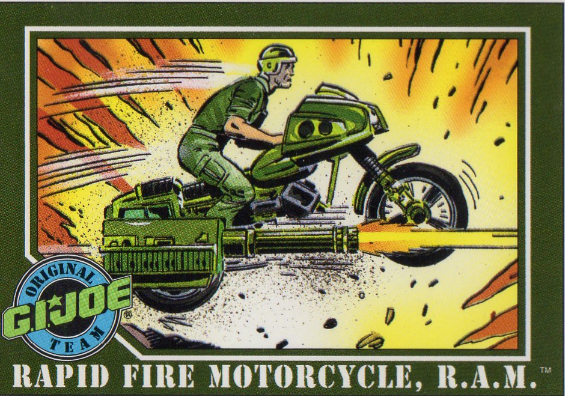 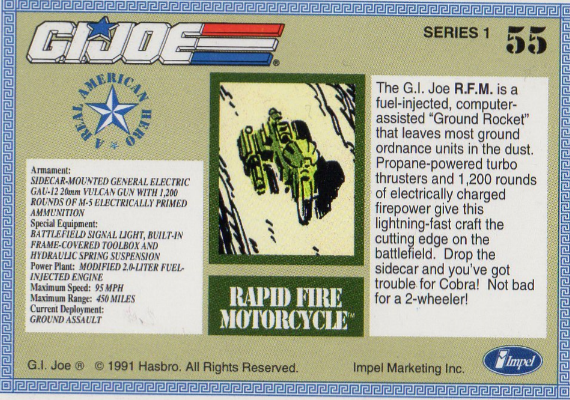 The box art for the RAM  shows a green shirt driving wearing a helmet with a microphone. One might think it was Breaker, but there’s no beard. The card art here shows some beard but then the helmet doesn’t have a microphone. Clearly, any Joe can handle the RAM. In 2008 the RAM was renamed RAM Cycle and was released with Cpl. Breaker together with a Cobra Flight Pod (that’s the official name, I always thought that Trouble Bubble was actually its name) with a Tele-Viper. I don’t know where exactly, but I remember seeing Lady Jaye driving the RAM. So let me leave the RAM with a little homage to that. 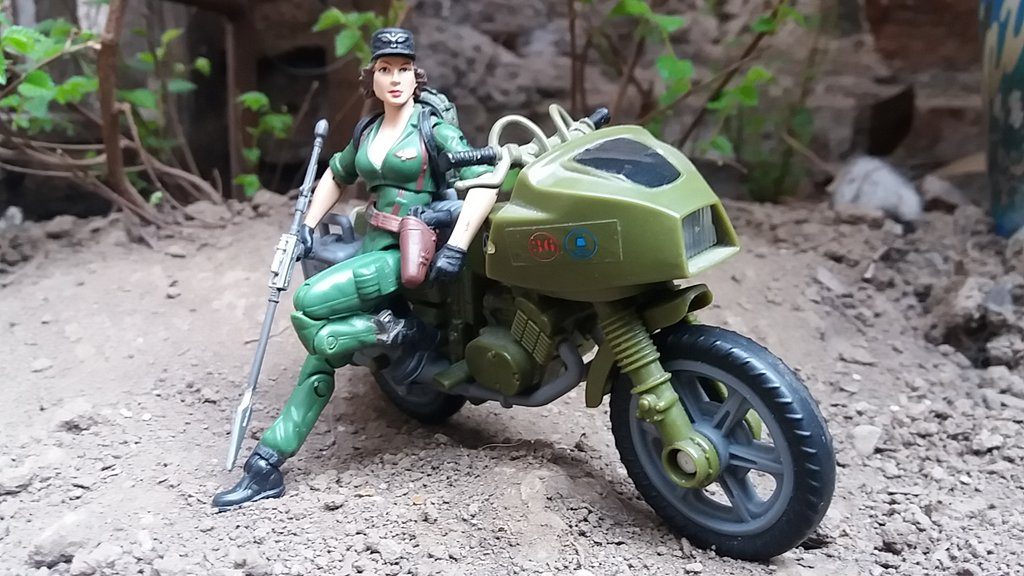 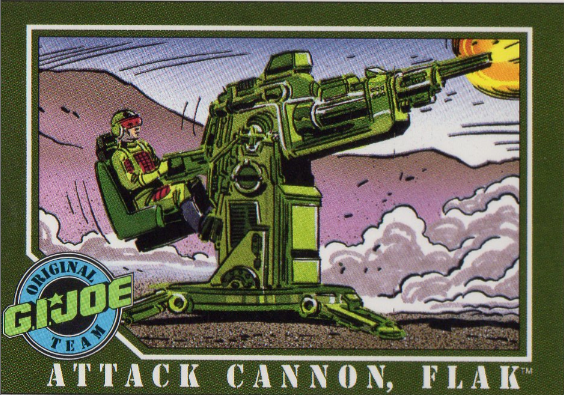 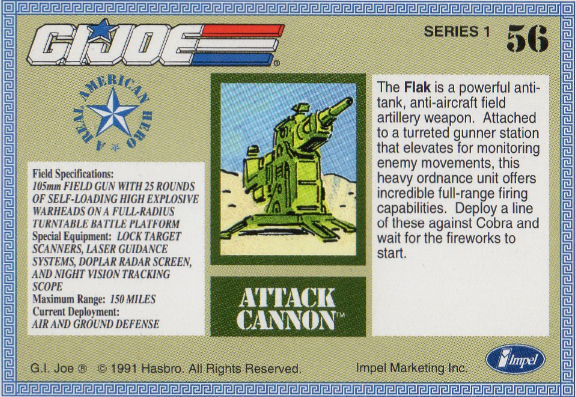 The FLAK is actually one of the 1982 toys I have in my collection. I bought a bunch of comics and figures from a fellow collector and to my surprise, a FLAK was included as a gift. It’s the 2008 version, but this one has the same colors as the 1982 original. It’s a realistic looking cannon, that can be manned by any greenshirt. I see it as a base camp toy. A defense weapon that is fixed on a base, ready to shoot at incoming Rattlers or Fangs. The FLAK was renamed F.L.A.K. Cannon in 2009, cause you know, it’s a cannon. People probably didn’t get that at first. In 2013, the Night F.L.A.K. was as part of the Collector’s Club Convention Exclusives. I have to say, it looks good in black. Moving on to #57, the V.A.M.P. 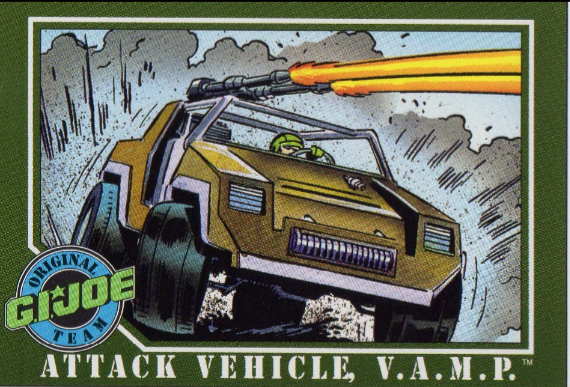 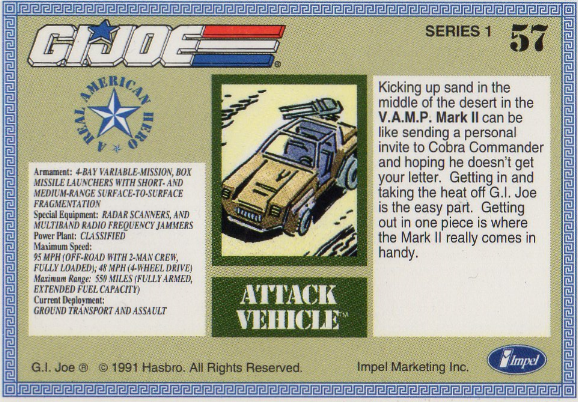 In 1984, the V.A.M.P. Mark II was released, just 2 years after the Mark I. The Trading Card goes on about how good the Mark II is but the image clearly shows the Mark I from 1982. The V.A.M.P. was released with Clutch. This is probably one of the most used vehicle designs over the years, but I only have one in my collection and that’s the 2014 Danger at the docks version. Technically you could argue I have 2, question is, is the Tiger Sting a V.A.M.P. or a Stinger? Because of the whole story around the Tiger Force and it using vehicles they “recovered” from Cobra, I’ll go with a Stinger and so I only have one V.A.M.P. Not much more to say, I like the vehicle. It’s one of the more realistic vehicles in the Joe motor pool. I’m gonna have to get more of them, loose that is. #58 gives us the HAL. 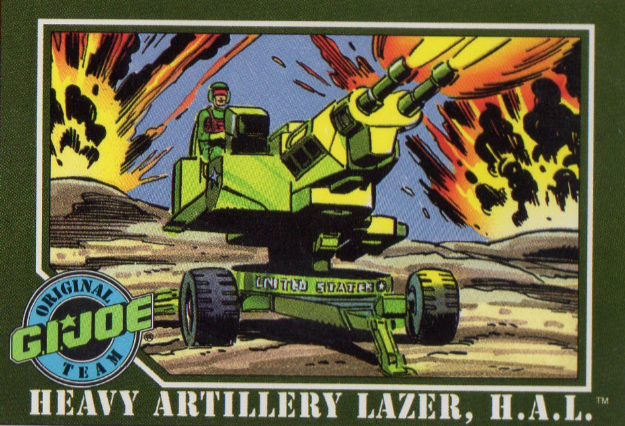 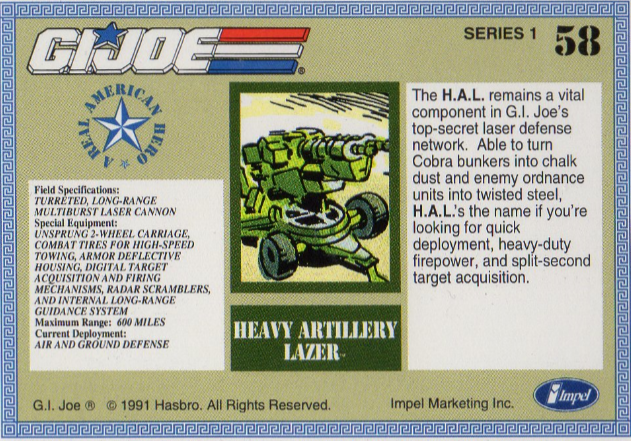 Ah, the HAL… Very effective if you use it to drop on a big robot. Other than that, not the best of Joe weapons. The HAL was released with Grand-Slam, being the popular figure he is, he was then released with the JUMP jetpack for its second release. Again, a more realistic looking vehicle, but fairly simple and a lot like the FLAK, more a toy to use at your base, not something you want to drag up a flight of castle stairs to use as a lockpick. Only to leave it there when the whole building blows… I guess cost efficiency was not something the Joes brass were thinking about. Moving on to #59, the MMS. 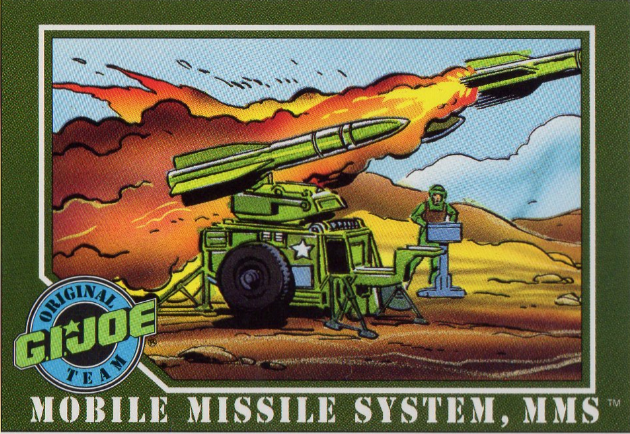 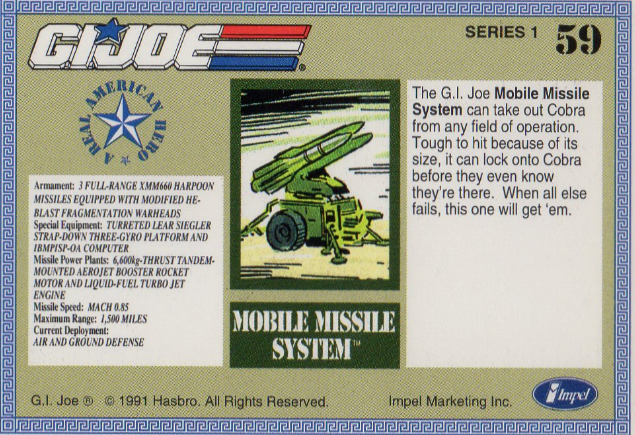 G.I. Joe was way ahead of their time, already talking of MMS in 1982, when cell phones weren’t even invented yet. The Mobile Missile System is useful, and sort of realistic – again, this is a constant for the early vehicles. Somehow it just doesn’t seem as attractive a toy as say a VAMP or RAM. It did come with the leader of the gang, Gen. Hawk, so I guess they used that feature to promote this toy. Don’t think they would have sold a lot without the free figure incentive. I’m facing a bit of a dilemma. I like it when toys are somewhat realistic. On the other hand, I do love some of the wacky vehicles the Joe line produced. Vehicles like the MMS here are realistic looking and could even work in real life (probably), but still I’m not looking to add it to my collection. If you happen to have a Cobra BUGG, I’d instantly buy it (at a reasonable price). Mixed feelings. Hard to put to words too. I don’t dislike them and they’ll probably end up in my collection someday, but just when I happen to come across them, I won’t go searching for them. Maybe it’s because I’ve never seen these in stores here, and didn’t see them until I read the comics when I was a teenager. Out of sight, out of mind… But always looking 🙂

The final vehicle for today is without a doubt the most impressive one of the lot, the M.O.B.A.T. 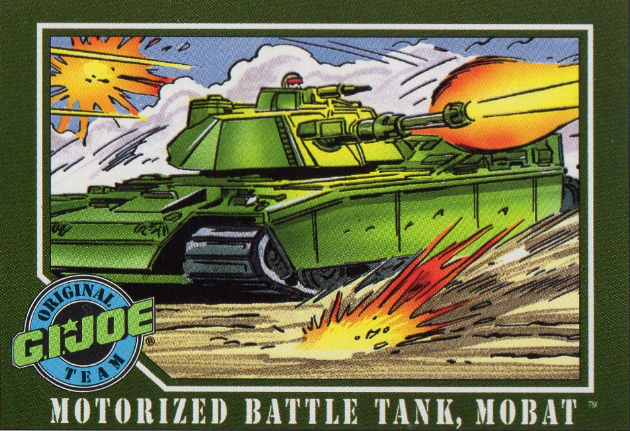 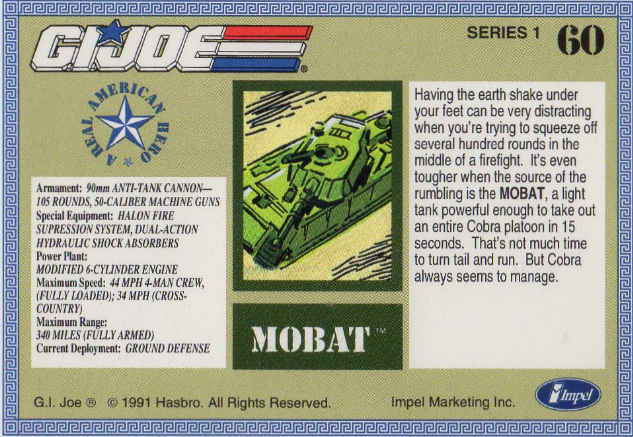 The M.O.B.A.T. is about as real as you can get to an actual military vehicle. On top of that, the toy actually moved on its own. This tank is a BEAST. With a 130mm anti-armor cannon as the primary weapon,  secondary weapon is the .50 caliber machine gun with 1,500 rounds of ammunition. The MOBAT is powered by two gas turbine engines (the toy by batteries :-)) and can reach 60mph on an open road and 45mph driving cross-country. It can submerge in water for up to an hour due to retractable snorkels and air-tight hatches.

I really like the M.O.B.A.T. Unfortunately, it’s hard to find over here, but I was lucky to score an Action Force Battle Tank, which is basically the same vehicle, but with a different color scheme. Seriously, just look at how cool this thing is, even in a pretty old commercial, still looks better than 90% of the toy commercials they’re airing now.

Well, that’s all for now. Next time, we’ll go where the people aren’t (according to Ariel that is).