It’s a stormy day here in Belgium with gusts of wind going well over 100 kph/60 mph. Nothing the Tomahawk, the all-weather, twin-engine, twin-rotor heavy lift and troop transit helicopter from the Joe team, couldn’t fly through.

I didn’t own the Tomahawk as a kid, but it was one of the first pieces I bought as a collector. I do remember having a friend who owned both the Tomahawk and the Killer W.H.A.L.E. and I went over to play with my Conquest X-30 and Warthog A.I.F.V. Strangely enough, we didn’t have any Cobra vehicles, but the bad guys always got the chance to hijack one of the Joe vehicles.

The card art for the Tomahawk is nicely done. It shows the helicopter in mid flight with it’s six-barreled 20mm cannon blazing. Their fire caused serious damage, if you can go on the smoke seen on the left. It’s a shame that there are no figures shown in the cargo area. You can however see the chairs , so nice details.

I’ve always been very fond of the Tomahawk (and also the new released Eaglehawk) as it is a very multi-functional vehicle. You can use is as a troop transport, but it can also stand on it’s on in a battle. The story from Special Missions #19 is one of my favorite stories in the Marvel run and shows the Tomahawk in all it’s glory. Like the Joes themsleves, even tough their battered up and tired, they get the job done.

Leave a comment if you liked/disliked or want to add your personal thoughts on the Tomahawk.

As you all know, I’ve been posting about the 1991 G.I. Joe Impel Trading Cards and I plan to explore the other available G.I. Joe trading cards.

The bit of exciting news is the fact that there are plans to turn his art into G.I. Joe trading cards. I’m following the developments in this and will post a review here when/if I get my hands on them.

I will still put posts online about the Impel Trading Cards (and in the future, about other trading cards – if all goes well), but I wanted to write something about the events of this week here in Belgium.

We’re all still coming to grips after the terror attacks in Brussels from Tuesday and maybe it’s my inner child and Joe fan that is talking here, but we really need a Joe team busting up the IS. I believe that no God or country is worth killing or dying for. We only have one world and we are all humans.

I could start quoting John Lennon, but there is a Flemish singer-songwriter who wrote something in the line of Imagine and I’ll just let his words speak for me (Translated from Dutch so the rhyme and rhythm is off).

You won’t find any virgins, nor spoons of gold

These holy scriptures are confusing and old

It is not written that any fool

may kill and abuse in the name of God

Because God is love and definitely not hate

There is no reason for abuse or a phony caliphate

It says so in both the Bible and the Qur’an

Without love, there is no heaven

I don’t care if you pray to God, Allah, Vishnu, the Flying Spaghetti Monster or you just believe in yourself. There are universal values that are found in any religion. We should respect these and – as humans – be bigger than religion or country.

We have arrived at the 9th card of the series. The Rolling Thunder. I’ll let you enjoy this magnificent vehicle for a moment.

The Rolling Thunder was first released in 1988 and was sold with the driver Armadillo. Please read JoeADay’s blog for a full analysis of the figure.

I didn’t have this vehicle as a kid, but it was the first Joe toy I bought on eBay as an official adult collector 🙂 To me, this is a huge playset. The only thing that came close was the General, but I didn’t have that too and I never even heard about the Flagg (I don’t think they released the Flagg in Belgium). I remember opening the box it came in (complete with driver, but just in a plain box) and feeling like a kid again. Then again, I still feel like a kid most of the time.

The Rolling Thunder (the name alone gives you shock and awe) can hold a lot of figures and it comes with missiles inside of rockets or is it rockets inside of missiles? In any case, if you’d see them comin’, you’d better be runnin’, right? It even had a big rotating cannon that needed to be controlled by 2 figures. And it had a missile on top of the gun barrel. Firing that would probably kill – or seriously injure – one or both of the figures operating it, but hey, in times of war, you need al the ammo you can get. 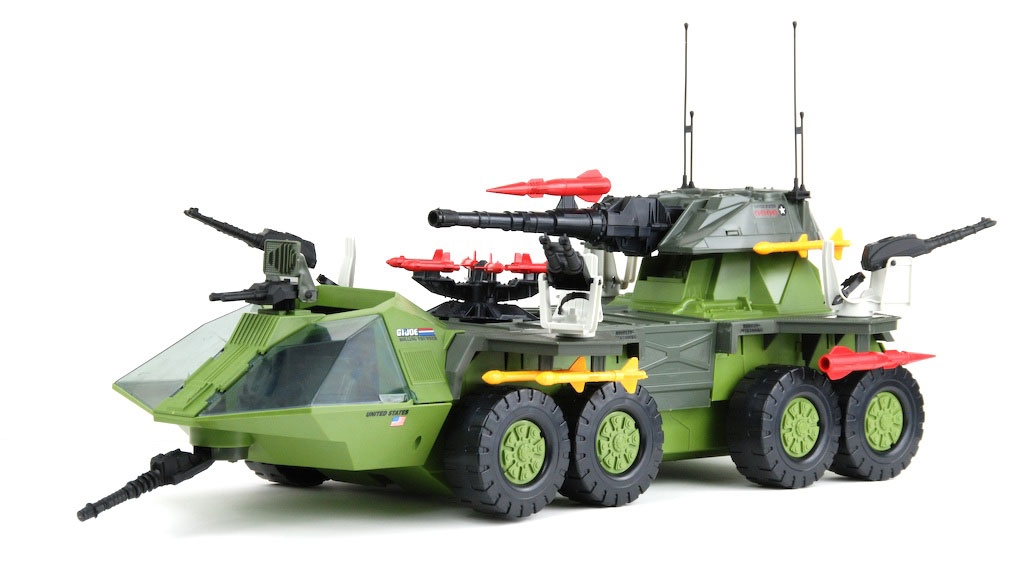 The colors on the card art here, don’t do justice to the bright shades of the toy. Yellow rockets, red missiles, a missile launcher base, a small ATV, guns and cannons all around. This is one mean looking vehicle. 8 wheels of Cobra smashing trouble.

With this ninth card, we arrive at the last card in the first Ultra Pro sleeve of my Trading Card collection. I’ve had several really good comments on the series and so I’ll be very happy to see you again when the next card is up for review. As always, leave a comment below or through Twitter.

All that’s left for me now is, Happy Collecting and YoJoe!