Time to conquer the land and seas in Cobra style with the following cards in the superb Impel Trading Cards series. 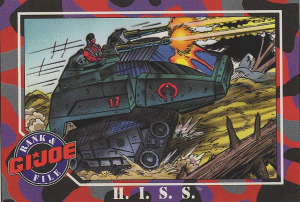 This was the second Cobra vehicle I’ve had in my collection. The first one being the little Devastator. This H.I.S.S. however could carry 2 people in the cockpit, 1 trooper in the turret and up to 4 troopers in the back. For me, that meant I could transport all my Cobra’s in one go (Yes, I only had about 7 Cobras… insert sad kid face). 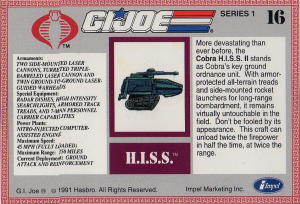 The description on the back talks about the H.I.S.S. model II, but the model depicted on the front is clearly the model I from 1983. The 1989 model II is lighter grey with bright red accents on the turret, guns and the windshield. As a kid, I never knew the older model existed, and I’m still looking to add one to my collection. I really like the first model better than the 1989 model, the triangularish shaped threads, the all black color and the red Cobra Sigil and number make for a more subdued tank than the grey and red from the model II. But it also looks more fierce and dangerous. And after reading the comics, I want that black model to put the Baroness in, she looks so badass driving a H.I.S.S.

Card #17 takes us into the water, fast and furious, the Cobra Moray Hydrofoil. 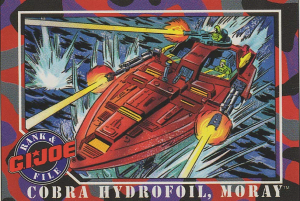 This is one big, bad boat. On the Box art of the toy, it features the driver Lamprey, but also a gathering of Cobra’s finest (sort of). Destro is manning the gun turret on top, the Baroness and Storm Shadow are on the aft dropping sea mines while Monkeywrench is shooting into the water (probably a Dreadnok survival technique for catching fish) and Buzzer is in the cockpit handling the searchlight. To say this is a strange selection for a mission is an understatement. 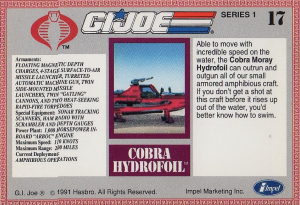 The card art here shows the Moray with all guns blazing and no real distinguishable troopers on board. Less detailed perhaps, but I like it. It shows the Moray is a force to be reckoned with when at sea and you best get out of it’s way.

I had discovered Carson Mataxis’ site; 3DJOES.com, a while ago. But only recently have I ordered the 3 books he created on the magnificent art of G.I.Joe. Check out his amazing site with full 3D pictures of most of the figures and vehicles now, the link to the Moray is here (the H.I.S.S. II is not online yet, but the model can be seen here. While you’re at the site, check out his books and posters and place your order to help him keep this site online and add more Joe awesomeness to the web! When the books arrive, I’ll post about it here, so keep an eye out for that.

As always, Happy Collecting and YoJoe! The next card we will be discussing is taking us back home, or to our home away from home at least 🙂

Leave a like or comments and check out my other posts.