The 18th Impel Trading Card brings us back home to the G.I. Joe Headquarters. 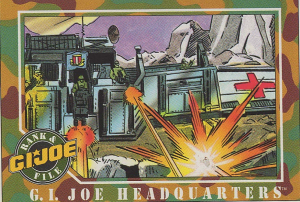 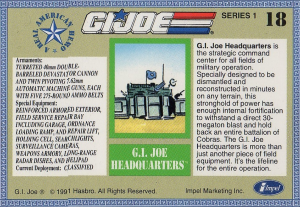 The card art here reminds me of the Marvel Comic issue #24 where Cobra Commander is being held on top of a mountain in a pre-fab fortress. As I said many times before, the first Joe toys we got here in Belgium were those from 1986 I think. Toys from the first few years, need to be found online as collector now, rather than been seen in stores or received as gifts when I was a kid.

I still find the concept of this HQ odd as straight from the start of the comics, the PIT (iteration 1), was shown in the comics as the Joes´ base. I guess that is why I made the link to the pre-fab base used to imprison Cobra Commander (briefly).

That being said, I do find it pretty neat that you can have a place for the MOBAT and VAMP inside the HQ and with the helipad to land the Dragonfly, it´s a very complete playset to show off the early Joes and vehicles.

I don´t have the HQ in my collection (yet). I have the 1987 Mobile Command Center and the Conquest of Cobra Mountain set from 2003 that I´ve been using to display my figures on. I still plan on building a custom HQ for my Joes, I just need to find some time to draw up some plans and start building.  And clean up my workplace first 🙂

As I´m writing this, I´m enjoying the last days of the summer holiday in a Holiday House in the Netherlands. I haven´t had a lot of time off during the summer and truth be told, the weather was not that great, so I didn´t really mind. This week however, temperatures have been on the rise and have been over 25 degrees Celsius (that´s over 77 degrees Fahrenheit) for the first time this year.

I´ve got my toes in the water, ass in the sand. Not a worry in the world, a cold beer in my hand. Life is good today! (link)

See you in September!

I had been thinking about changing the original europeanjoes.wordpress.com site to a .com site for a while. Finally I decided to go through with it and, well, here we are.

Brand new site (thanks to one.com hosting) and a brand new style created by my talented brother-in-law Davy (check out his designs on his website www.davydenduyver.com, Behance, Twitter or Instagram).

Leave a like or comment about the new site and keep coming back! I’ll continue discussing the Impel Trading Cards as well as the various other Joe related stuff I have in my collection.