Well, it’s time to put out the cards on the table with this post that brings matters to a head or acts as a conclusion or point of decision. The title could also refer to a game for the blind and visually impaired, which in a way does relate to the story. The blindness that is. There are also numerous movies sharing this title, dating back as far as 1942, as well as television shows and episodes, records and songs. But enough about those things, let’s get cracking with the Impel Trading Card #87, featuring the cover for the Special Missions issue #5, Showdown. Spoiler alert, the moral of the story is a teeny tiny bit in your face, like BIG time.

The story kicks off with a Cobra ground crew inspecting a Night Raven. A member of the rescue crew is looking into the cockpit and questioning why a crowbar is included in such a high tech plane. A maintenance officer explains that when the canopy would not open for some reason, the breakout tool can be used to bust the canopy and allow the pilot to escape. At that moment, the Strato-Viper appears and bullies both crews away from his plane. He will be taking off to recon a Florida Air Force Base.

The Joes have spotted the recon flight and are sending Slip-Stream and Ace up to greet him. And annoy him. Their orders are to only fire when fired upon first. On the way to their planes, they meet the ground and rescue crew they hooked up with the night before. The maintenance crew had been repairing the Conquest all night and one of the men couldn’t visit his kid in the hospital because of the overtime he put in. Slip-Stream tells him everything is fine with his kid and gives a toy (Transformer!). 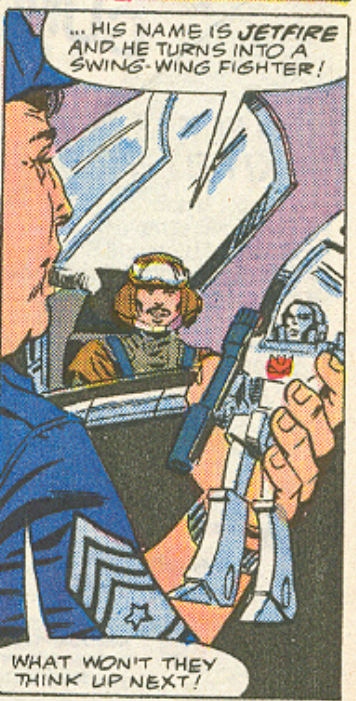 Now, I’m not a huge Transformer connaisseur, but I do know that this fellow is Megatron and he turns into a tank or a gun… Not a fighter plane. I guess Larry and the team weren’t that big of Transformers fans themselves.

I’m not sure what to make of this to be honest. Later on in the story, the Joes encounter the Transformers, so either that is out of continuity or they’ve created toys based on the giant robots that try to destroy them… I think that it’s just a pop-culture reference that needed to be put into the comic by the marketing people over at Hasbro. Seeing the wrong name and transforming ability, Larry didn’t think about it and just added it in to keep them from giving him a hard time about it.

The Joes take to the sky and find the Night Raven. Ace inverts the SkyStriker and taunts the Strato-Viper, who gets pissed off quite quickly. 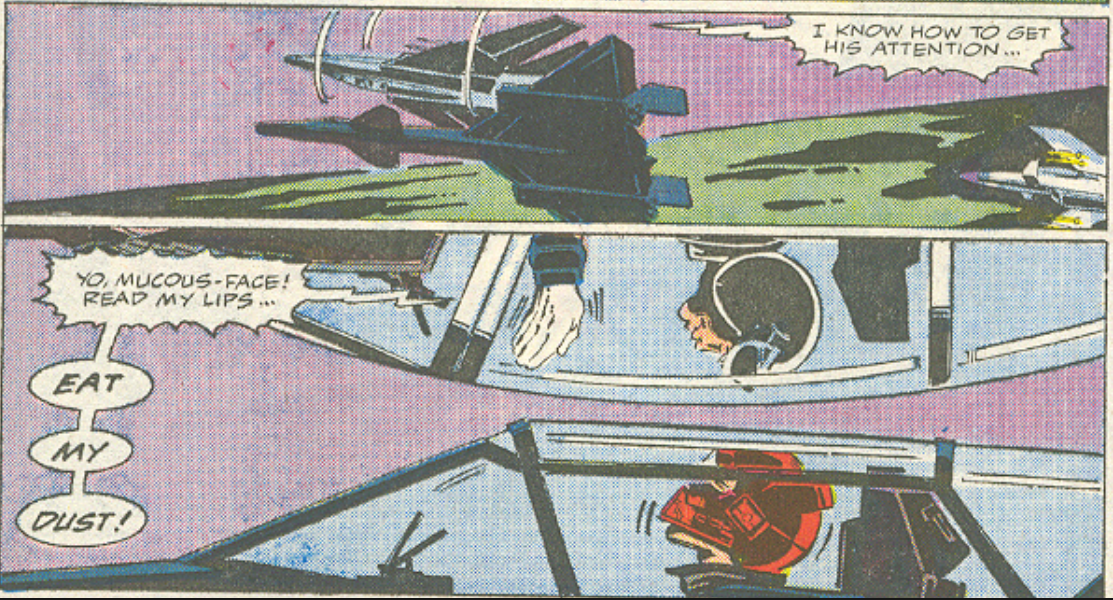 He fires a missile at Ace’s SkyStriker and pops a flare so that Slip-Stream in the Conquest behind him is blinded. Ace is hit and has to eject. He lands in the water and the rescue crew is scrambling to pick him up asap. 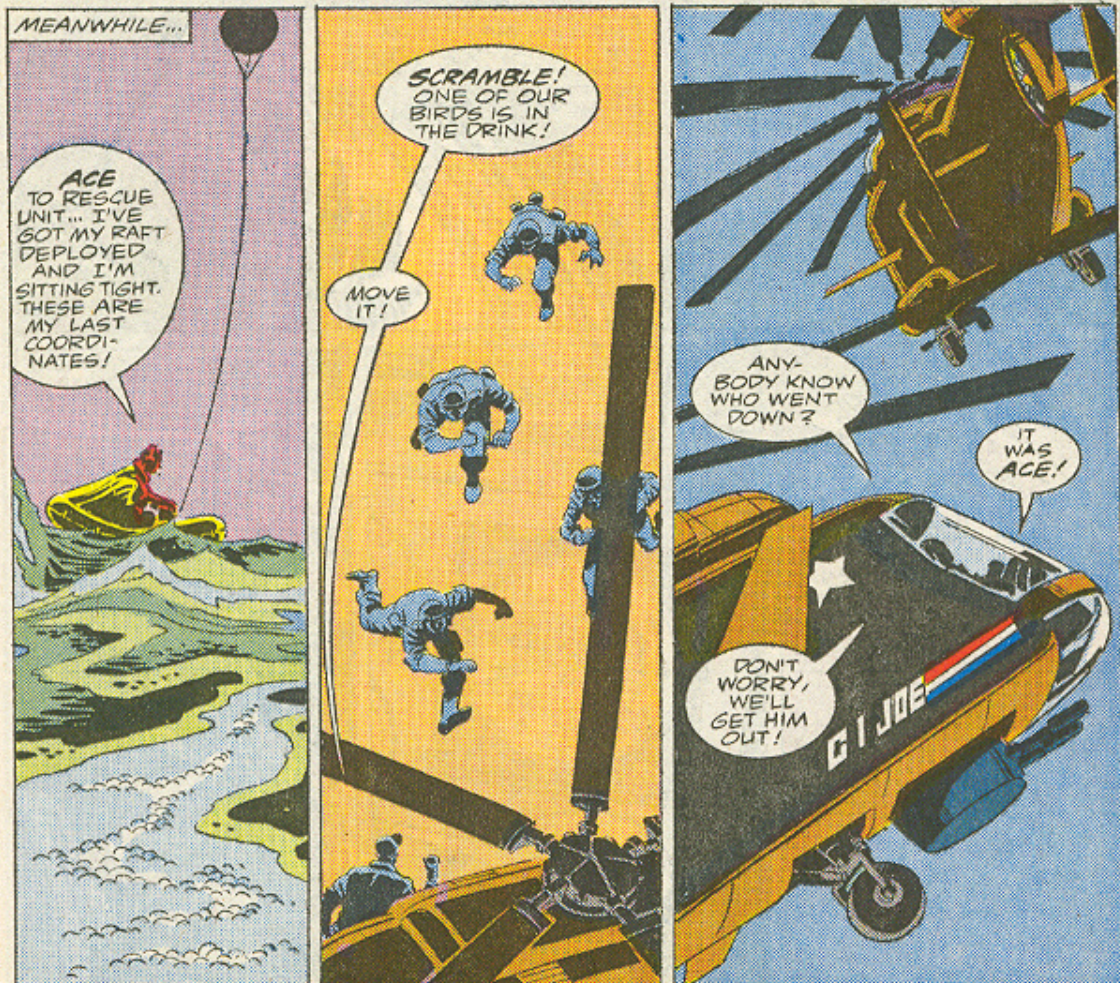 It takes a few moments for Slip-Stream to regain his vision and by this time, the Night Raven is behind him. He shoots out a flare of his own and runs an evasive maneuver, but that stalls his engine. The Strato-Viper sees the Conquest spiraling down and flies away. Slip-Stream remains calm and collected and doesn’t pass out. Just in time, he gets the engine running again. 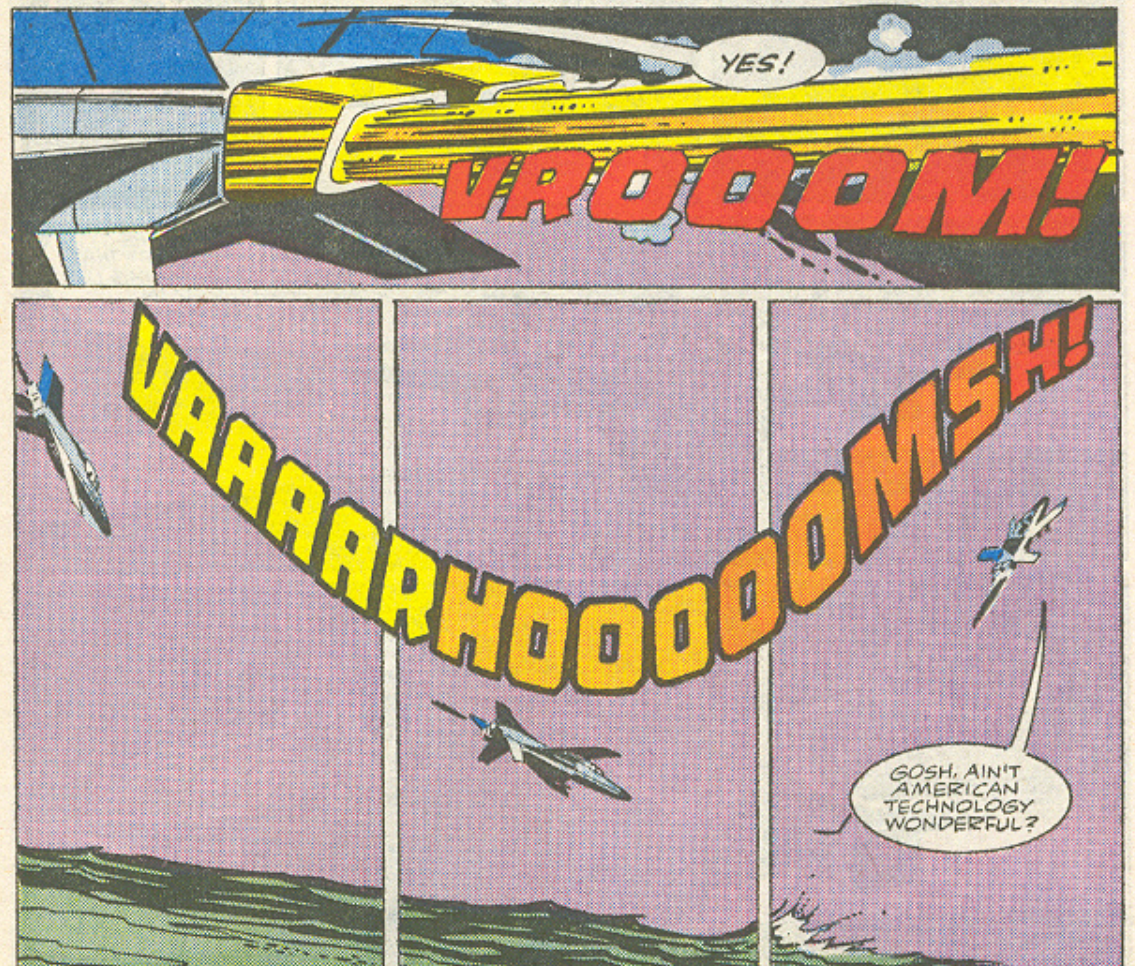 Meanwhile, the Night Raven is having some electronic issues caused by the Conquest’s flare. The Strato-Viper is getting all worked up about it and is so distracted that he doesn’t notice Slip-Stream coming up from behind. Slip-Stream opens fire and damages the Night Raven enough to send it going down. The Strato-Viper tries to eject, but the canopy doesn’t open, not even with the manual release. He’s able to crash land on the water, but the breakout tool is missing, so he can’t break the canopy open. 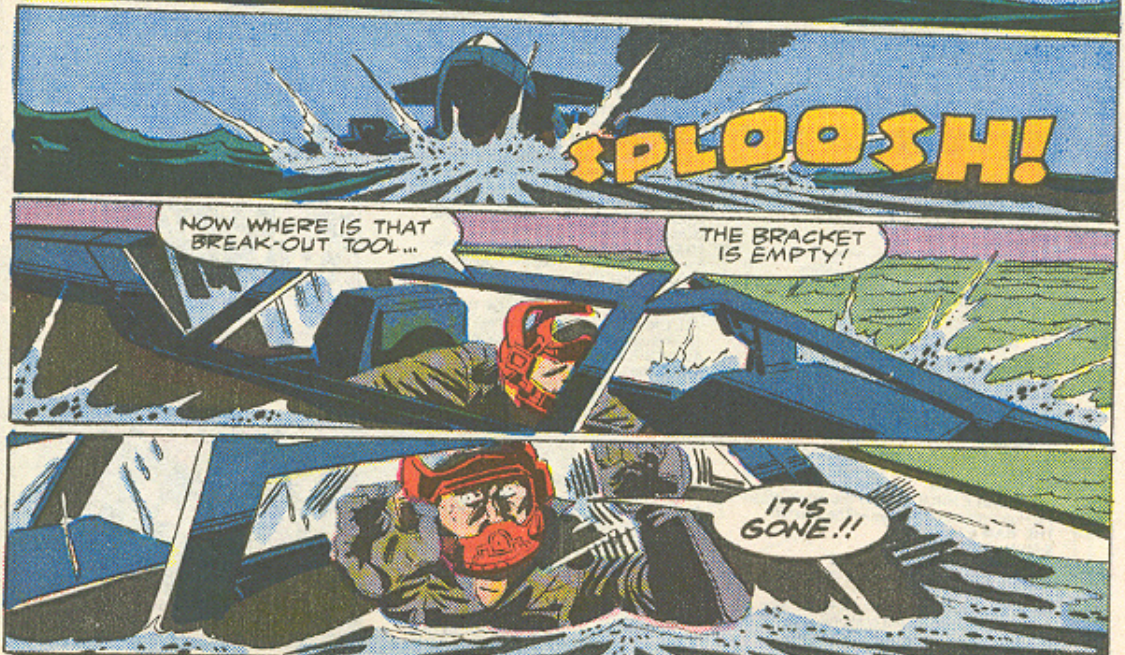 The Cobra rescue crews are airborne, but they refuse to fly at full speed. The Strato-Viper’s abusive behavior towards them shoots back like a boomerang. The plane is slowly sinking with him still aboard and locked in.

Slip-Stream flies past Ace to make sure he is fine. The rescue crew soon picks him up. Ace didn’t even have the time to test out his shark repellent spray (another pop-culture reference). When they arrive at the Joe base in Florida, Slip-Stream gives a Top Gun style victory roll to dedicate the victory to the ground crew. 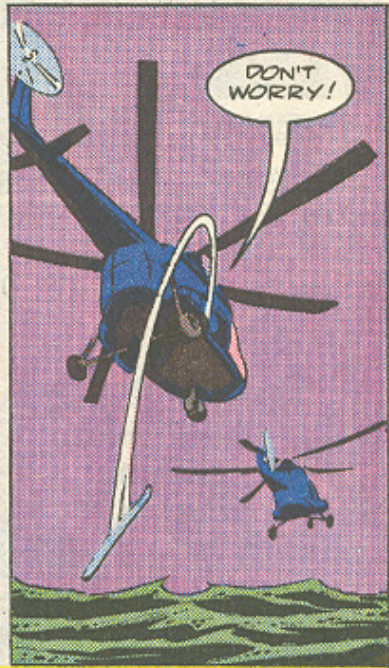 Elsewhere above the ocean, the Cobra rescue crew arrives just as the tailfin of the Night Raven slips below the surface. No sign of the Strato-Viper. Instead of trying to locate him, they just discuss the fact that they really should have given the canopy some maintenance, but that the pilot should have been able to break out. One of the crew casually shows the breakout tool he swiped from the plane before the Strato-Viper took off. They throw it into the ocean and head back for Cobra Island.

Well, I always knew that G.I.Joe was all about good versus bad, but this story lays it on THICK. As Matthew 7:12 teaches the believers, “Do to others whatever you would like them to do to you.”. The good do good, the bad don’t do much… And not much good, would you believe it. The difference between the Cobra pilot and the Joe duo couldn’t be more clear as well. Where the Strato-Viper abuses his crew, the Joes are friends with their ground and maintenance crew. Naturally, this reflects in the response from the crews when they actually have to go out and rescue their respective pilot. It’s all very simple and sickeningly obvious that it might as well be a Disney movie. 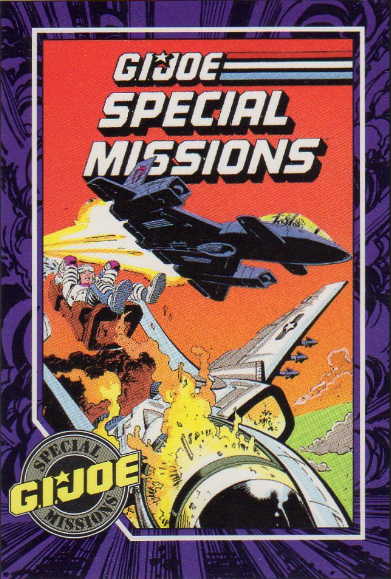 The card itselfs depicts the cover from the issue as usual. It’s a fiery cover where it would appear the Joes aren’t faring to well against Cobra. Yes, there are actual Cobra in this Special Mission. We haven’t seen them in the flesh since issue #1. The cover art was done by Mike Zeck and John R. Beatty. The book itself had a script by Larry Hama and art by Herb Trimpe. The wonderteam of the Special Missions. 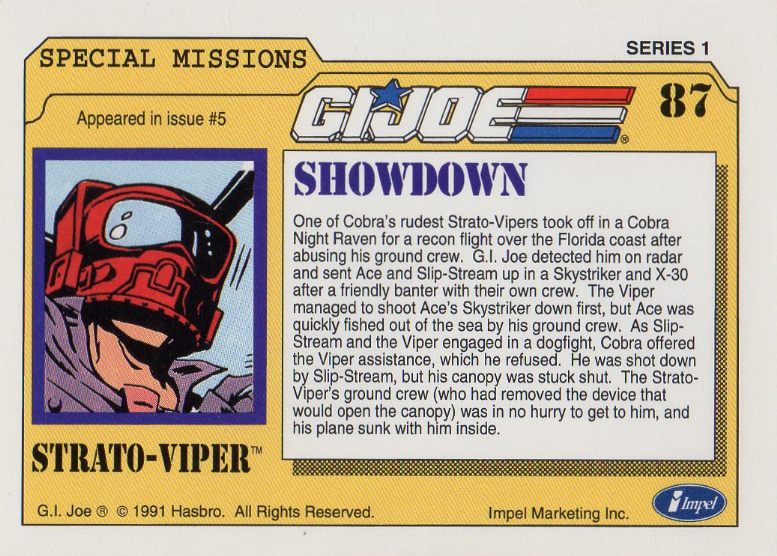 The back of the card shows the Strato-Viper. The figure, yes, just one official release, came on the shelves with the 1986 series and was boxed with the Night Raven. There was a mail-order campaign in 1989 and another one in 1992 where you could get a Strato-Viper without the plane as part of – respectively – the Special Missions Driver mail-away and the Cobra Patrol Unit mail-away.

I actually do have the Night Raven, with a Strato-Viper, though I didn’t as a child. It was one of the first big toys I really wanted as an adult collector. By that time, I still hadn’t read the English comics, but I did know of the Strato-Viper because one of the cartoons (In the Presence of Mine Enemies) was released over here, dubbed in Dutch, on VHS. I must have watched that tape hundreds of times, and I still have it in my collection. In this story, like you don’t know, Slip-Stream is able to shoot down another Night Raven, but his X-30 is destroyed as well. Both pilots land on an island that harbors one of Dr. Mindbender’s labs. It’s a great story, that has a happy end for the good guys, although no-one ever saw that female Strato-Viper ever again… Speaking of the Night Raven though, the plane got a second life as part of the Sky Patrol. That huge beast looks awesome in chrome. I have mine still mint in the bags and in the box, but the old tape has loosened over the years and so I’ve been able to take a look at the shiny parts. The small reconnaissance craft was also given another chance as part of the G.I.Joe Crusader Space Shuttle. Come to think of it, I own that one too. I guess you could say I’m a fan of the Night Raven/Sky Raven/Crusader. In honesty, I always wanted to be a pilot when I was a kid. I was devastated when it turned out I had to wear glasses and that meant I would never have been able to become a fighter pilot. I lived close to the local airport (mostly cargo and some smaller planes back then), and so I always had a fascination for them. It’s only natural that I like collecting them as Joe vehicles. So I still treasure all my planes from both Joe and Cobra. And since we’re not getting some new planes (so far, and with the 6″ line, it’s doubtful any vehicles will be released), I’m looking at other lines to score new planes. I have the True Heroes C-130 and the Beast Bomber, and would you believe it, The Corps has a new plane out now, the Sky Strike. 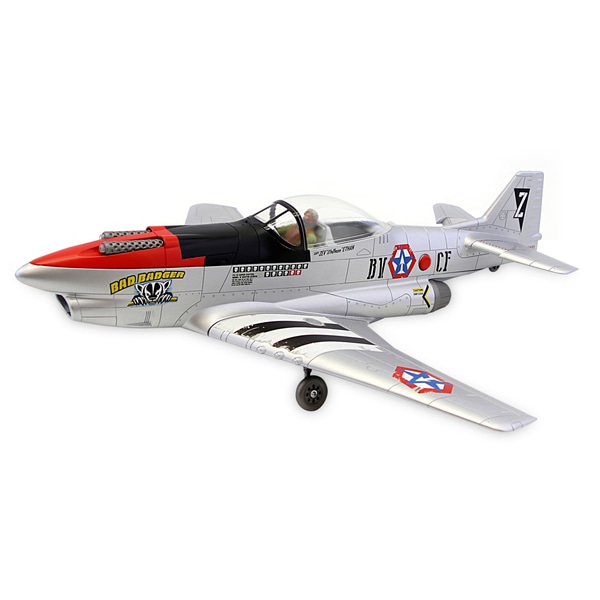 A very good looking plane if I do say so myself. The only issue is that I can’t get my hands on it. So if you happen to live in the UK (or Australia, it would appear they have it at the other end of the world too), and would like to help a fellow collector out. Let me know! We can make a deal! Contact me through the contact form, over on Twitter or via mail (bjorn@europeanjoes.com).

That’s it for now, join me back next time when we take on … you’ve guessed it, #88. There a story there, so do come back. Don’t miss out on it, no need to evade. Get it. I’m going now. But seriously, it’s a great story. #hypebuilding