It’s that time again kids. Time to switch things up. We’re taking a look at the Impel Trading Card #89 featuring the cover art for the Special Missions comic book #7, The old switcheroo. 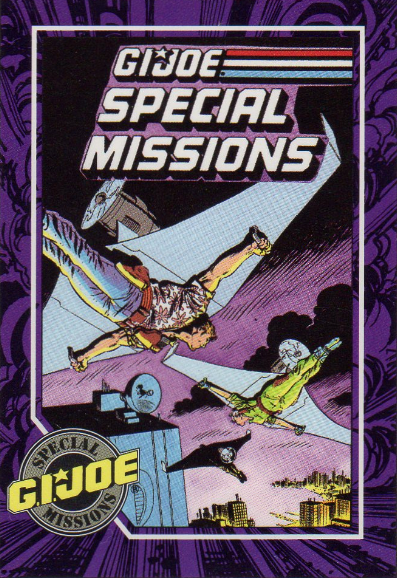 The story begins with a bang when a group of Menshevikistans drive a Cerberus Security truck into the lobby of the Cobra Consulate building in New York City. Another team of insurgents is entering the building through the service entry, pretending to be from a pest control company. The attack catches the Cobra’s off guard and the Sierra-Gordo counter revolutionaries are able to kill several Vipers on their way to the boiler room in the basement of the building. The leaders demand Cobra to pull all it’s armed forces from Sierra Gordo and support their group as new government or they will blow up the Consulate.

Inside the Cobra Consulate building, The Baroness and Zarana are using the CCTV camera’s to keep track of the intruders. They see them drilling holes in the support columns and putting explosive charges into them. Dr. Mindbender, who is also in the Consulate, has been checking the blueprints and noticed that the revolutionaries could bring down the entire building with half of the explosives they are placing. The Baroness uses the rooftop satellite comms system to apprise Serpentor of the situation. He does not want to be bothered with this trifle matter as he placed The Baroness in charge of the New York operation. She needs to take charge. 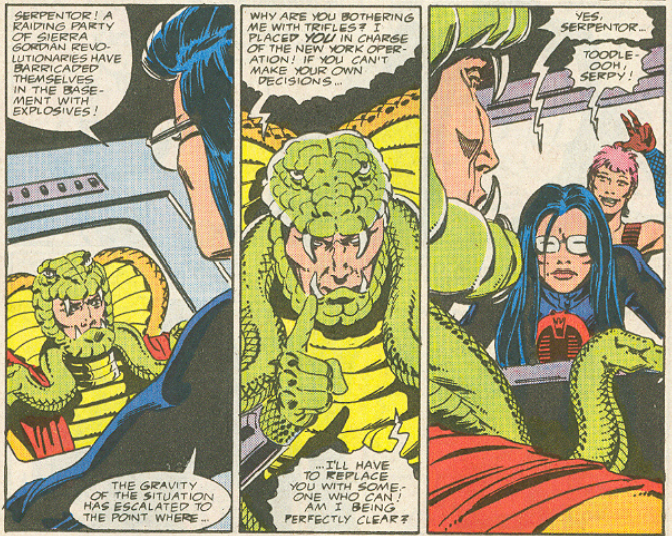 Across the street, Chuckles, Dial-Tone, Psych-Out and Lady Jaye are monitoring the Consulate Building. Listening in on the conversations between the Cobra top members, Psych-Out concludes that The Baroness will perform according to the projected scenario and the Joes can proceed with their own operation.

In the lobby, The Baroness orders an assault on the boiler room. The revolutionaries are able to shoot down the pack of Vipers and as a warning that they do mean business, they blow up the truck that was still in the Consulate’s lobby. The Baroness concludes that they really are dealing with suicidal terrorists and she orders a complete evacuation of the building. Zarana criticizes her decision and both ladies start a discussion which Dr. Mindbender soon puts to an end as the evacuation alarm is sounding. The personal security detail of The Baroness are to stay in the building and she recalls the members that were patrolling on the roof. At that point, Chuckles gives the order to Breaker and Tunnelrat to cut the power to the Consulate from down in the sewer system. The entire building goes dark, both sides inside thinking the other is responsible. 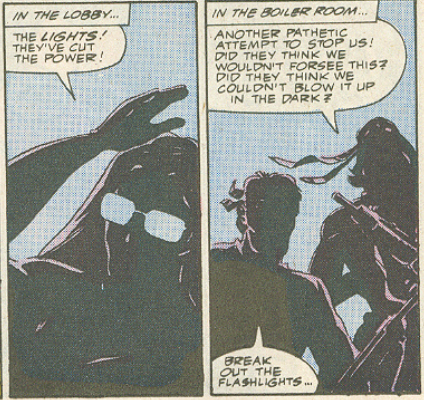 Using the cover of darkness, the Joes cross the street via powered hang-gliders and land on the roof of the Consulate building. Dial-Tone taps into the main communication line. Meanwhile in the lobby, The Baroness and Zarana are fighting again and downstairs, the Menshevikistans are arguing about actually blowing up the building. Psych-out, who remained across the street, gives the go to proceed with the next phase of the plan, which involves Lady Jaye, a long black wig and glassed… Down in the sewer, Breaker and Tunnelrat fix the power, so the revolutionaries in the boiler room can see a message from The Baroness (or is it?) on the TV telling the Sierra Gordoians are amateurs and calls their bluff.

In the basement Evita takes the detonator and pushes down the button as upstairs Zarana and The Baroness get into a physical fight. Instead of an explosion that levels the building, riot gas is escaping from the tubes the revolutionaries placed. The gas is blinding both the Cobra’s and the Sierra Gordo Menshevikistans. The Joes can just walk out through the door as they are wearing gas masks. Chuckles and Pshych-out planned out the entire scenario and foresaw every move both sides would make. It was all an elaborate plan to plant a bug in the Cobra Communications System. 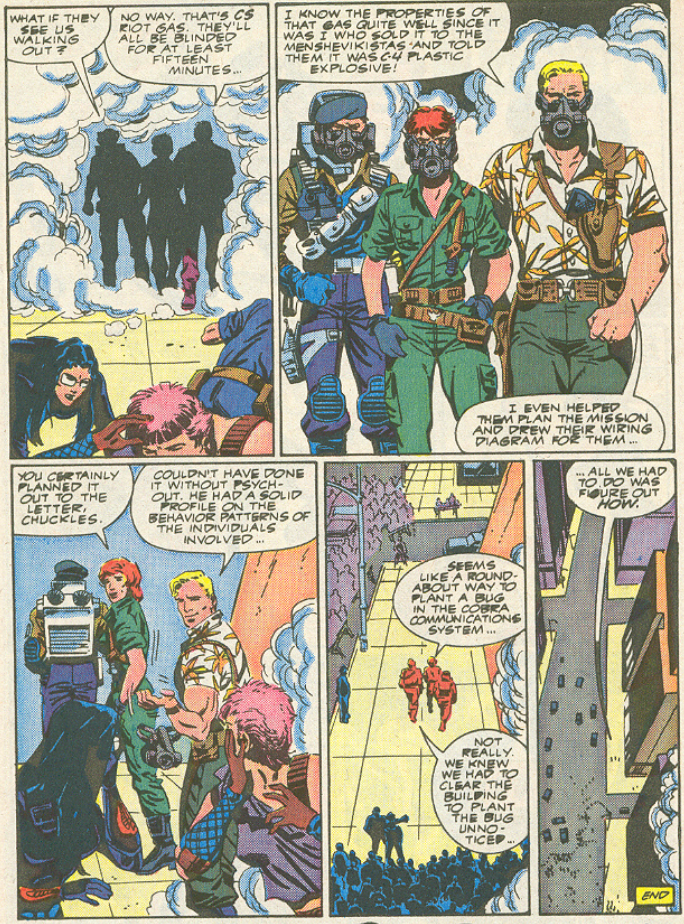 First, let’s get the official stuff out of the way. The script for this story is by Larry Hama, art by Herb Trimpe, letters and coloring by Phil Felix and Bob Sharen.

Now, let’s get stuck in the story itself. It’s a fun little stand-alone story that planning really is very important. The Joes studied their rivals and came up with a plan that may seem elaborate, but they got the job done without firing a single bullet. It also gives some depth to the rivalry between The Baroness and Zarana. As I said, it’s a small stand-alone story, so it’s quite forgettable, if not for a few highlights. The cover art really is beautiful. The hang-gliders are being used, although they are powered here – and then dumped into the river, cause it was acceptable in the 80’s to just dump your trash in the river, right? Give this story an update to 2020 with some cyber IT stuff and you could get an entertaining action flick out of it. 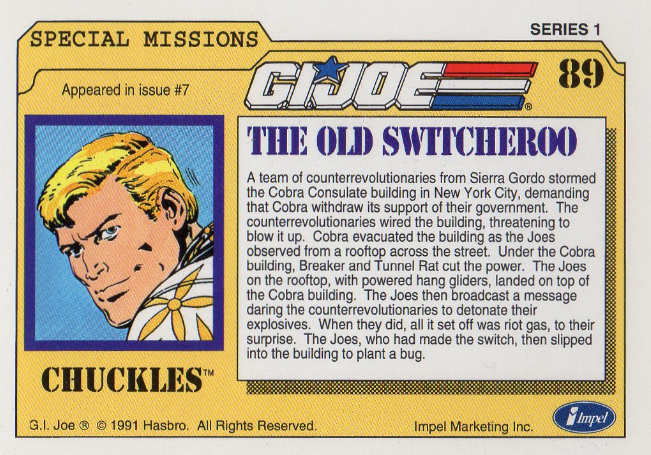 No surprise on the back of the card to see Chuckles there. Ok, so it could also have been Psych-Out. We got Chuckles in a floral shirt, not his blue one I might add. In total there have been 5 figure releases for Chuckles since his first appearance in 1987. It took 20 years to get to a second figure, and all he lost were his sleeves, as this figure was part of the Collector’s Club Operation Flaming M.O.T.H. (set 3 out of 4), shipped with Shipwreck. Version 3 came 2 years later as part of the Assault on Cobra Island box set and the sleeves came back. v4 appeared in 2013 and gave him a subdued color scheme, fitting for a member of the Night Force (again a Collector’s Club limited set), packed with Freestyle – a female fighter pilot. Finally, in 2015, Chuckles got another release as part of the 50th anniversary Desert Duel set, sold originally a the Entertainment Earth booth during SDCC. His floral shirt is still dark, but with red highlights now.

I’ll be brief about it, read Cobra – The Last Laugh (Amazon). The. Best. Chuckles. Nuff said. Get to it.

Next time we’ll take on card #90 (out of 200, so we’re nearly halfway) where we will put the spotlight on Low-Light!