I know the G.I. Joes can sometimes look like superheroes, but they’re actually only humans that perform above and beyond the call of duty to protect the free world. But if they were superheroes, this guy’s super hero name would be Weed Man. Not really sure what superpowers he would have. The power to grow plants on unfertile ground? Smoke his opponents? Be high as a kite all day? Flying I mean, to watch over us. You know, like super heroes do. (Phew, dodged that issue quite expertly.) Time to introduce the man of the hour, featured on the Impel Trading Card #73, it’s Pot-finder! I mean Pathfinder. (Dammit, I did fell over the elephant in the room and called what everyone is thinking, right?) 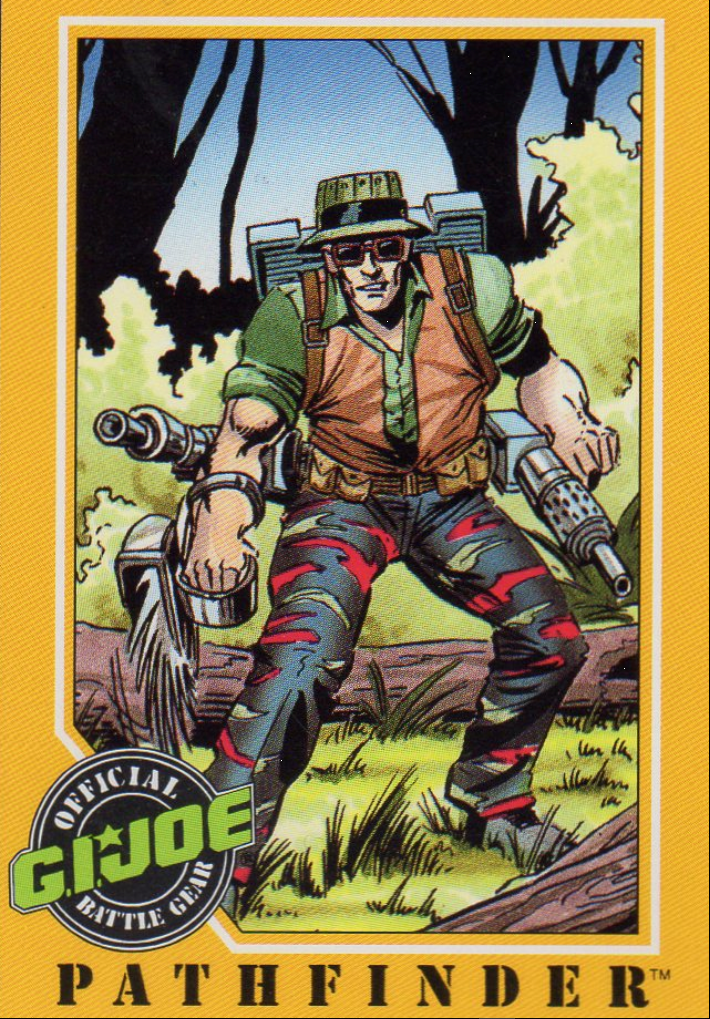 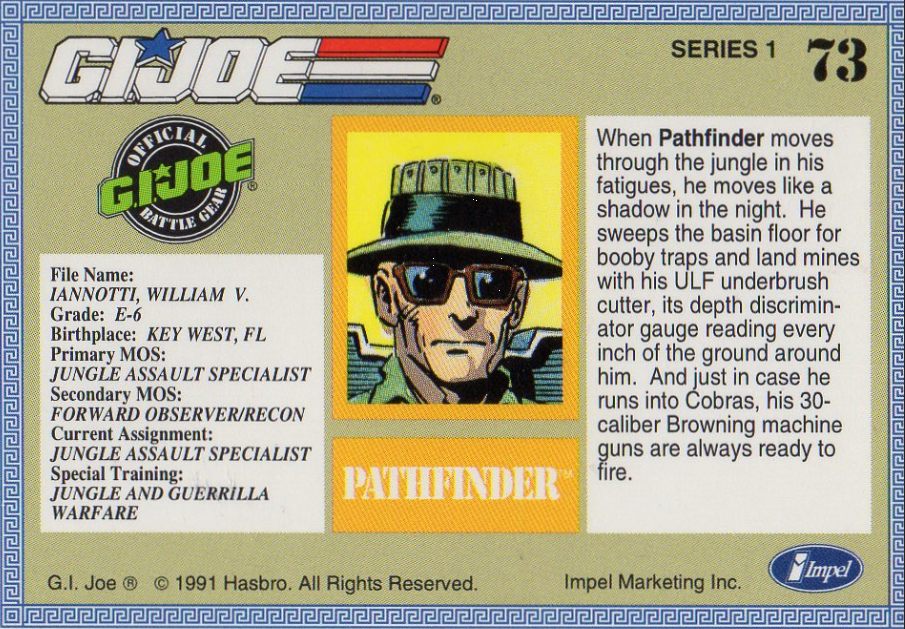 There have been 3 figures released of Pathfinder. The original version from 1990, then an all-grey 2001 version released exclusively with the A.W.E. Striker. That same figure gets a 2004 Venom vs Valor version as part of a set containing the V.A.M.P. with Twin Battle Gun and Chief Torpedo and Big Brawler. Then in 2016, Pathfinder gets picked up in the Club’s FSS 4, taking the look back to resemble  the original figure (as is the case with many of the FSS figures).

In the comics he was a background figure in the Devil’s Due run, but he did get a lot of screentime in the DIC cartoon. He is prominently present in ‘United we stand’, ‘Granny Dearest’, ‘Victory at Volcania’, ‘Pigskin Commando’, ‘An officer and a Viperman’, ‘D-Day at Alcatraz’ and ‘Stuck on you’. He is often paired up with Captain Grid-Iron or Ambush, but in this last episode, he is accompanied by Cobra Commander during a fun stroll through the jungle after crashing during battle.

I don’t have much love for the character. I can’t really pinpoint why, but I just don’t like the figure. He looks a bit like a Nam version of Snake-Eyes (but with his hat higher on his head). And I guess you could use him as a basis for a custom. The colors don’t do it for me and let’s face it, the guy is just a gardener with an attitude.

Next time, we’ll take a high risk, high reward offensive strategy or cause a traffic accident. Who’s to say? In any case…