I guess the time of pen and sword are behind us, although I still use a fountain pen for my daily work notes. Still, we keep on using the pen and sword metaphor. This week, we have arrived at Impel Trading Card #66, the man who can type faster than his shadow, Fast Draw. 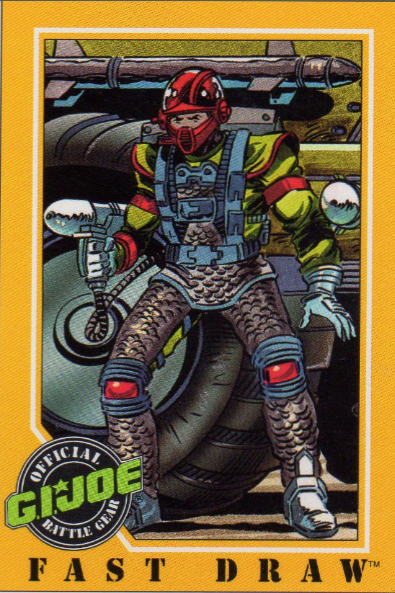 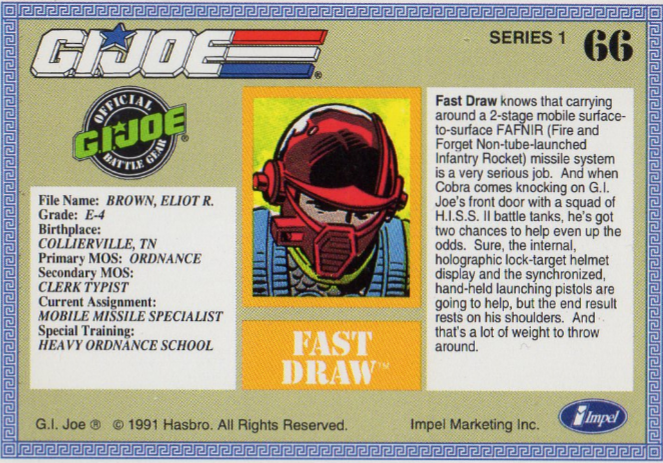 I guess this guy is the Joe equivalent for Cobra’s Mr. Bang Bang (well technically, he’s an Iron Grenadier, so Destro’s private army, but he was employed by CC, so I’m counting him as a Cobra). The difference between these 2 rocket men, is that Fast Draw has hand controls for his missiles, where Metal Head (a.k.a. Number One – yes, that’s a Star Trek reference) is shouting like a complete idiot.

Enough about that, the figure (yes, just the one release again, although the club recently announced they are releasing an updated version in the FSS 8.0) was released in 1987. I honestly couldn’t tell you if I have the figure in my collection. I’m guessing I do, but since all of my Joes are still boxed up, there’s no way to be sure… I guess my entire collection is a bit like Schrodinger’s cat at the moment. I have something or I don’t, there’s really no certainty these days 🙂

The first appearance of Fast Draw in the comic books (Marvel run), is in #60 I believe, where he is part of the group of Law & Order, Lt. Falcon & Chuckles, who kidnap General Hawk whilst believing they are actually members of G.I. Joe. A bit of a filler issue, after that, the whole Borovia story starts to unfold, oh and – SPOILER ALERT – CC gets shot (issue #61, amazing cover art).

I don’t think Fast Draw gets any (explicit) action in the cartoons, he may be in the background somewhere, but I don’t recollect him at all.

A bit of a shorter post this time, but there just isn’t a lot I can say about this guy. If he were here, he probably would be able to talk some more about his clerk typing specialities, but I won’t go into that right now.

Next time, we’ll have another man (or is it woman nowadays?) with a lot of firepower on his/her back.

Until then, YoJoe and Happy Collecting!

Oh and Happy Mother’s Day to all our fantastic mothers who bought us our first Joes to play with!