Welcome back to the blog! This week’s post will be shorter than the last one 🙂 If you haven’t read the previous post on the Original Joe Team, do so now and then get back here to read all about the 1991 Impel Trading Cards #51 and #52 which we had to skip to add General Hawk to the team post.

We’re starting this one off with #51, the Cobra Viper. 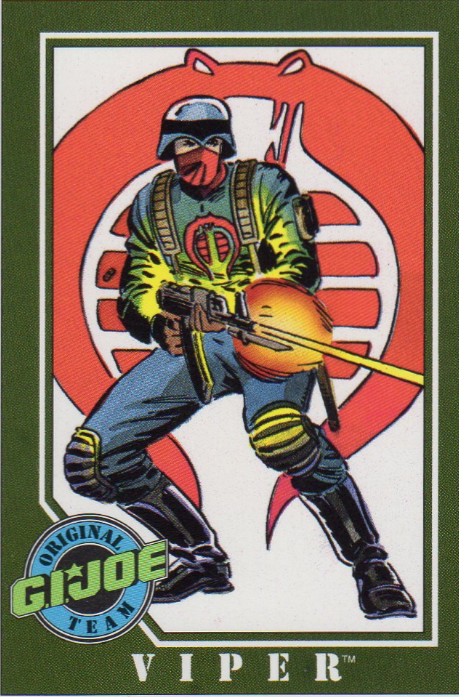 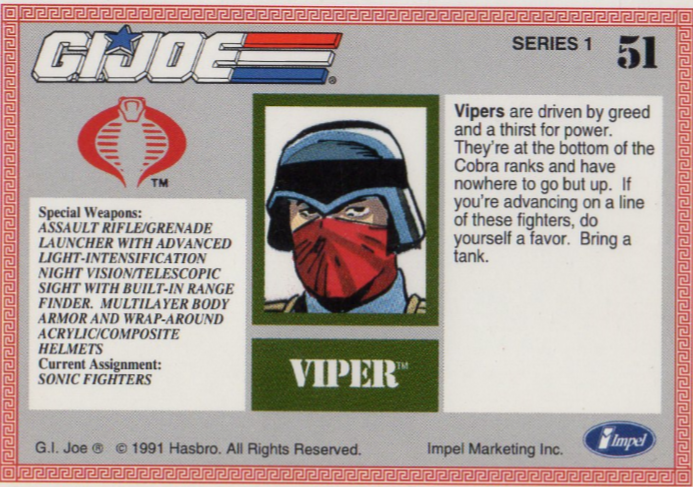 The figure portrayed here does differ from the Viper figures. This figure is the Cobra (soldier) released in 1982 alongside the 13 original Joes and the Cobra Officer. CC was also available, but at first only through mail-in. The Viper (the figure with the cool looking visor helmet) was released in 1986. I guess that by 1991 (when the Impel Cards were released), the Vipers were commonly known as Cobra’s Infantry.

The Vipers are the Cobra Greenshirts. Bottom of the hierarchy, but that doesn’t mean they’re not fearless. They are the ones that charge forward while CC is yelling ‘COBRA, Retreat!’. They are mercenaries, hired help, and if they have any doubts, they’ll probably end up being strapped to the Brainwave Scanner for attitude rearrangement.

They are just generic troopers. Only one guy ever stepped up. Scarface. He was actually a Cobra Courier, but who’s saying that is better than a Viper?

As I may have mentioned in the previous post, I don’t have a lot of the 1982 figures and so I don’t have a Viper in my collection. I’m not much of an army builder myself. One of each is my motto! But I do see the attraction some people may have to build armies of these Vipers. Losing armies, but still armies 🙂

There are 29 (before you freak about that number, Snake Eyes has 70+ figures) figures released. Most of them in the distinctive Cobra blue with red sigil, but some have other colors. Still, the Cobra Royal Blue is a beautiful color and I prefer that to the other color schemes.

#52 is the Cobra Officer. An evolved Cobra Viper to put it in Pokémon terms. 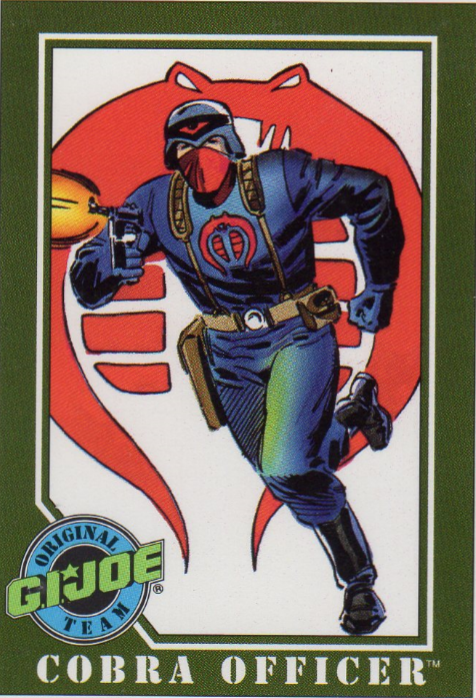 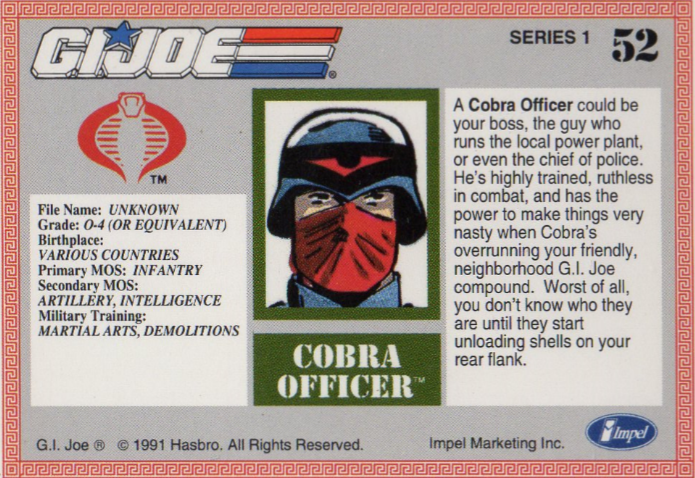 In the army of the blind, the soldier with one eye is the general. The best of the worst. Cobra’s forces have never been very successful. A lack of competent leadership? Perhaps. I blame the middle-management. The Cobra Officers are just incompetent to belay and execute the delicate and precise winning strategies that Cobra Commander concocts.

There have been 12 different figures of the Cobra Officer. Considering the 29 different Vipers we had, it’s safe to say that Officers have a better chance of survival than the Vipers do.

In the cartoons, both of these figures are like Stormtroopers. Sure, they see the enemy. They know how to fire a (laser) gun. They just don’t think of putting 1 and 2 together. No wonder that Dr. Mindbender started working on the B.A.T.’s as Cobra’s foot soldiers. They are even more expendable…

That’s it for now. Next time we’ll listen to some Van Halen.