We have arrived at the 2oth card. I started this series back in February, and I´m trying to get some writing rhythm going so that I can get posts out more frequently. Any feedback and/or tips you may have, please let me know by adding a comment to one of the posts, sending a Tweet or email. Don´t hold back, every comment can help me become better at this 🙂

Now without further ado, let get talking about Card #20, Shockwave. 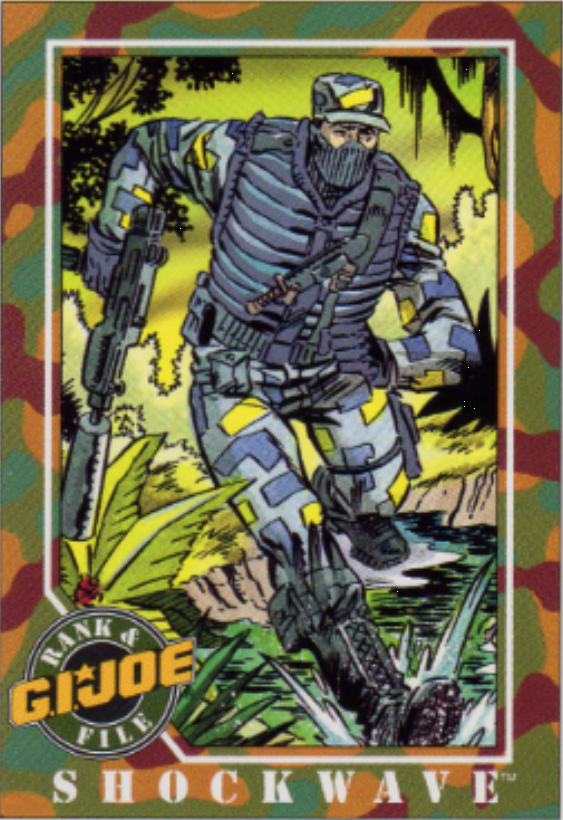 I have to confess, that I´m not very familiar with this figure. I never had it as a kid, and can´t say I ever saw him in the stores (or I just can´t remember seeing him). 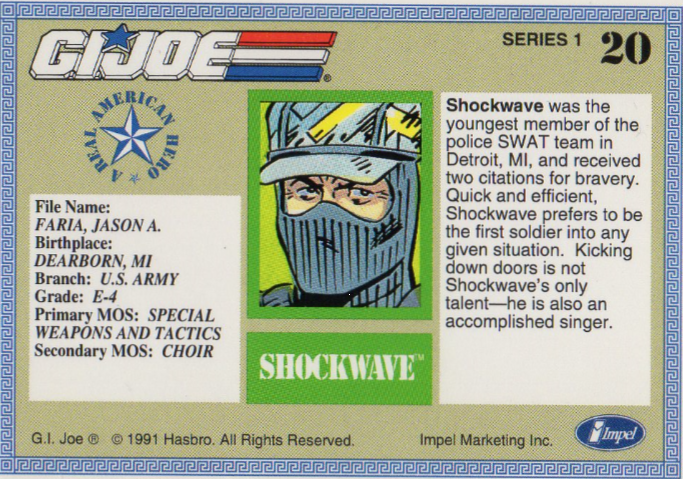 Albeit that the figure never made an impression on me, I did have a TPB comic of the Special Missions (in DUTCH!) which included #22. In this issue, Lady Jaye, Chuckles, Hit & Run and Shockwave are enlisted by the FBI to assist in a hostage situation where a family is held captive by some terrorists. I won´t spoil the story here, but the ending of this story sure made an impact on little me back in the day. (A review of the story can be found here.)

The card art is a bit strange, the guy is a SWAT member, but is shown running through what appears to be a jungle setting. I suppose Joes should be able to work in any environment, so I´ll go with it. The card describes him as being a gifted singer. Was there ever a musical episode of the cartoon? Other than Cold Slither, I can´t think of any. Maybe there should be a Broadway version of G.I.Joe The Movie. Can you picture that magnificent intro played by a classical orchestra with a full musical cast on stage performing? EPIC!

Looking back, I don´t know why I haven´t looked harder to find a Shockwave figure. I really liked the story and he played a major part in it. Then again, by the time I read the comics (I only had 3 TPB of the Special Missions in Dutch), it would have been around 1994 (I was 12 or there about). After 1994, it was very hard to find Joes in the stores here and I was still far from discovering eBay and online shops.

Since April this year (see Comic book update), I have completed my Marvel ARAH run and thus my focus is shifting now back to collection more figures and vehicles. Of course, the odd paraphernalia associated with G.I. Joe and Trading Cards will always spark my interest. And Action Force, Funko Pops, The Corps (I´ve got my eye on The Beast right now, just waiting for a reasonable shipping cost), LEGO (or other building blocks that can be used with the Joe Kre-O´s), or well, basically anything geek.

That´s it for now. Come back next time when another one bites the … Sorry, no spoilers 😉