Yo Joe! Just a short update this time. I had mentioned being in the market for a new laptop to work on at home and well, I’m typing this on my brand new Microsoft Surface Pro 7. As it turns out, in January, there was a great deal where you not only got a discount on the Surface, but you also got a free Type Cover. Sadly, I couldn’t get the Signature Type Cover because someone at Microsoft decided that they don’t ship those in QWERTY to Belgium. They do have the regular Type Covers in International layout, so I got that one. Make room for a – small, I hope –  rant here? You bet.

You see, in Belgium we officially have 3 languages: Dutch (Flemish), French and German. Our country also has 3 regions, each with their own governments and politicians. And then there is a Federal government and the European Counsil and Parliament as well. Needless to say, too many captains for a small boat and too much money down the drain – or worse, into the pockets of the politicians. French had been the dominant language for years since the founding of Belgium way back in 1830. The aristocrats and upper echelon of society still hold on to French to keep a distance between them and the commoners, who speak Dutch. Can you imagine being a soldier in the WW I trenches and having a commanding officer (who got the position just by being from a particular family) that only speaks French, while you don’t speak that language? Anyway, the Flemish got sick and tired of being seen as second rate inhabitants and from the late 1960’s onwards, Dutch grew in prestige and it became the most prominent language. Officially though, we still have the 3 languages and our school directives still state that we should all know the 3 languages. In reality, the French speaking part still can’t speak a word Dutch and the Dutch speaking people still switch to French when we encounter someone speaking French. Since French was so dominant and they controlled the school system for so many years, when the typewriter came to life, AZERTY was chosen as the layout in our country. And the Dutch speaking half was forced to use it. Me too, I have learned to type on AZERTY and for years I had to use it because they just didn’t sell QWERTY keyboards. When I went to college, I shared a computer classroom with the Engineering department. They used QWERTY as that makes a lot writing code a whole lot easier. Since then, I have gladly switched and have been trying to convince every Dutch speaking Belgian to do the same. Typing English is easier on QWERTY and so it typing Dutch (The Netherlands use QWERTY so that’s a No Shit Sherlock moment for you right there). Still it’s very difficult to buy a new keyboard – seperate or as part of a laptop – with the QWERTY layout. Just visit hp.be, dell.be or any other manufacturer or store and try to order one. If you’re lucky, it’s an option, but most of the times is just impossible. Let’s end this cultural history lesson and rant here, if you skipped this part:

Back to my new Surface Pro 7. I wasn’t really sure what to get. I looked at regular laptops (keyboard issues came to play here), desktop ones and hybrid forms of computing. I even looked at the new iPad, but in the end I went with a Surface Pro because it gives me everything I need. First off, it runs a full version of Windows 10 meaning I can use all the programs I was using. Next, it has a touchscreen with pen support, so I can actually really write on it. I haven’t gotten a Surface Pen so far. Still looking at the best one, should I go original MS or a different brand? Prices are very different to say the least, so I’m comparing and researching before making a decision. Third, it’s compact and light, so even though I don’t usually take it with me, I could, say take it along when I have a doctor’s appointment and work on the go. 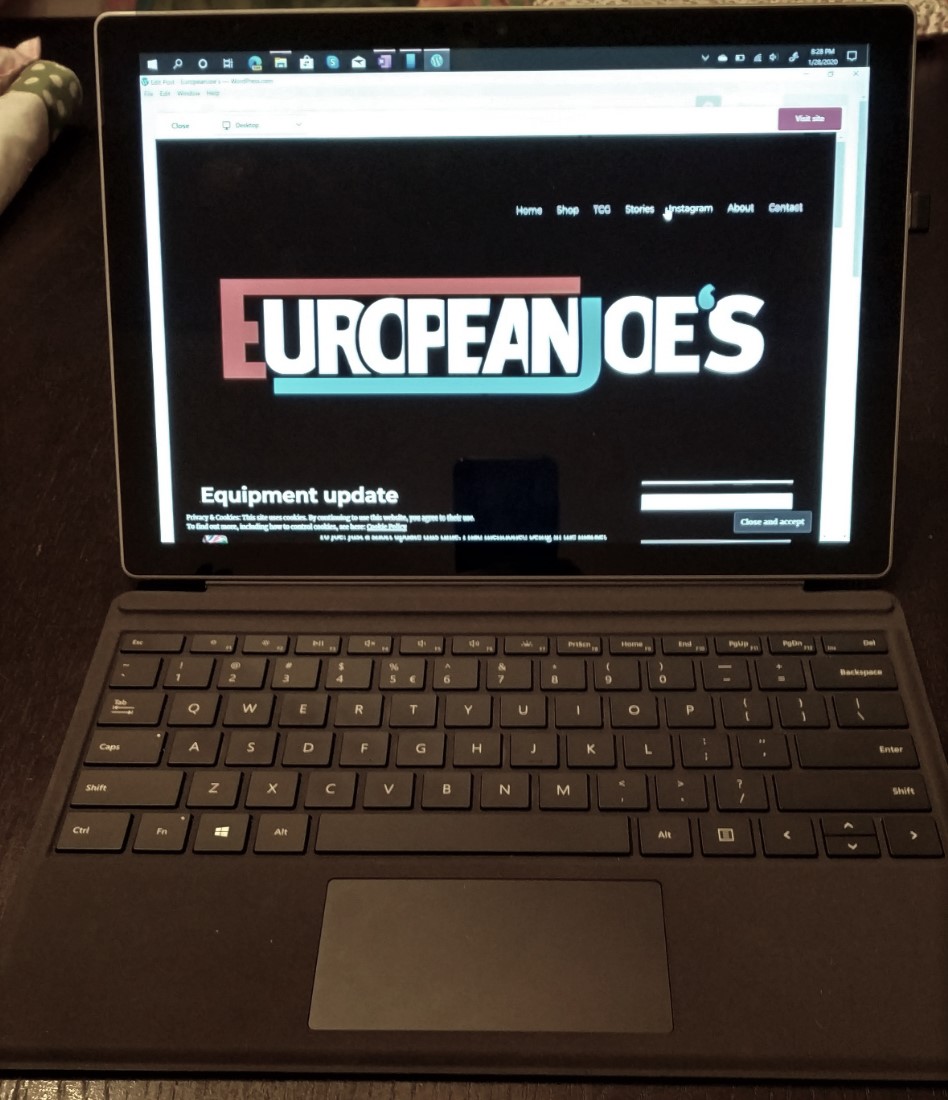 Bit of a crappy picture, I know. Trust me, it looks awesome in real life!

So far, I’ve been getting everything I need onto it. I’m using OneNote as a draft and research tool. Then the WordPress app to create the finished blog post. As for writing the longer stuff, I have Scrivener. I’m gonna try to not put too much stuff onto it, keeping it clean and somewhat free of distractions (no games!), but I do have a Shadow link on it just in case I need the power of a full blown desktop.

Well, that’s it for this short update, I’ll be back soon with the regular posts on the Impel Trading Cards.