We are back on track with the next installment of the G.I. Joe 1991 Impel Trading Cards. It’s undeniably and irrefutably time for #70 of the series, Mr. Kurt Schnurr, better known as Air-Tight (or Airtight). 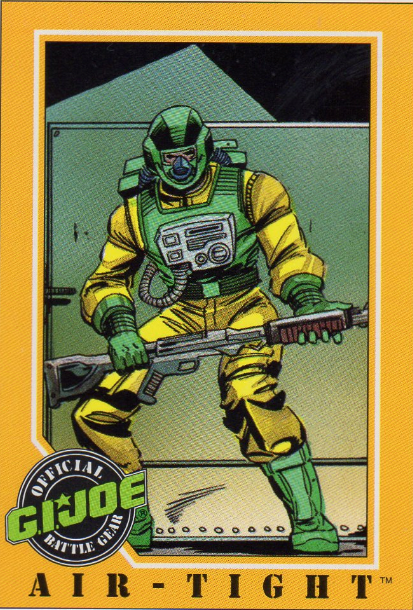 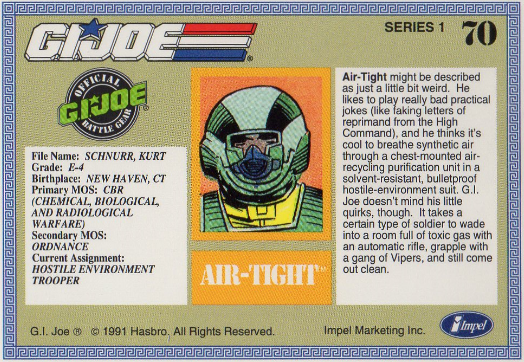 Airtight has always been a practical joker. Itching powder, whoopee cushions, plastic barf, everything you could ever think of and more. Those kind of bad jokes test the patience of his teammates to their very limits. He would probably have been thrown out long ago if it weren’t for the fact that he’s the only one who volunteers to suit up without hesitation for the missions that would make one’s skin crawl. Cobra unleashes more lethal concoctions everytime and the fact that any one of them could be so corrosive enough to eat through that suit of his never seem to bother him at all.

Airtight specializes in CBR (chemical, biological and radiological) science. In his childhood, his obsessions include testing his limits (he could hold his breath the longest) and collecting plastic dinosaurs.

There have been 4 figures released of Airtight. The first one in 1985, he came with a green backpack, a mile of hoses and a weapon that could be attached via the hoses on his backpack. The head had a non-removable helmet, it always reminds me of Copperhead’s head. It took 23 years for Airtight to get a second version! In 2008, this version had a removable visor and vest. 3 years later, v3 was released, albeit the figure is officially named Kurt “Airtight” Schnurr. I guess Hasbro was trying to show that the Joe’s were human first and super heroes second. This version came with a complete set of removable gear. Not just a helmet and vest, but there were 2 backpacks and 2 guns and 1 other type of high-tech equipment. Finally, v4 was released in 2013 as part of the Club’s FSS 2.0. It was basically the v3 repainted to let Airtight become a member of the Tiger Force. They also dropped some of the gear, but still a very cool looking member of the coolest sub-team.

In the Comic Books, Airtight was one of a group of potential new Joes being tested in the Nevada desert by Lady Jaye. During the course of the test it was revealed that he collected scorpions. When the group came under attack from Cobra, using new mutant plant spores, Airtight’s chemical knowledge proved essential, using battery acid to destroy the spores. He then made use of his scorpion collection to attack attack Destro and Mindbender. Later on, Airtight would be involved in several other missions, including the assault on Springfield. The best story he is involved in, comes from the Special Missions (naturally). It’s my favorite story really and long-time readers will already know which story I’m talking about. It’s #2, Words of Honor. In the story 2 teams of Joes are sent out across the globe. One team goes to South America to ‘protect’ a former head of poison gas research at the concentration camps from retaliation of the Mossad. The other team, which has Airtight as a member, is sent to Greenland to try and neutralize a downed plane that was carrying nerve gas. Seriously, my brief description doesn’t do the story justice. Go and (re-)read it. After you’ve read this post! There is a second Special Mission (#21) where Airtight plays a big part. Cobra has placed canisters with what is believed to be toxic gas in the sewers and a Joe team is going in to neutralize them, lead by Tunnelrat. In this issue Spearhead and Max are introduced. The gas turns out to be stink gas, a bitter veteran redeems himself by saving the Joes and Cobra’s scheme actually works for once… All in all, a very good story. Aren’t all the Special Missions just that?

Next time, we’ll turn up the heat and set the blogging world on fire!