Way back in February 2017, we displayed Impel Trading Card #29 featuring Captain Grid-Iron. Today we have another Joe sporting fanatic. Batter up! Here is #68, Hard Ball. 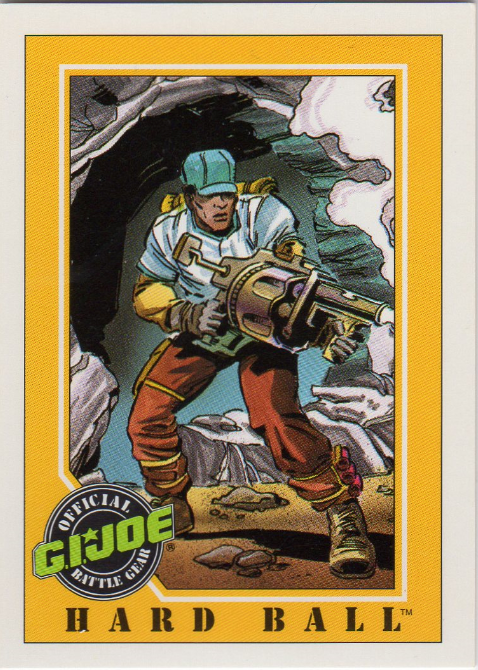 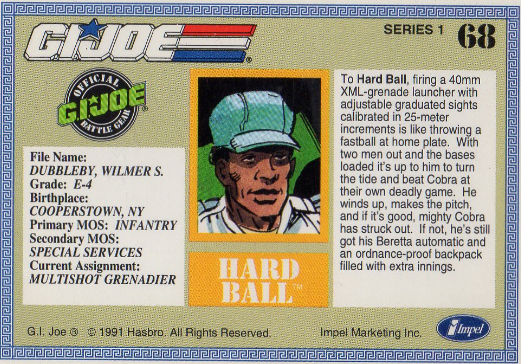 I wonder if all these sport references in G.I. Joe were an attempt hy Hasbro to get the kids playing with Joes into sports? In any case, Cobra could always beat Hard Ball since they have plenty of BATs 🙂 I won’t even try and explain that one. If you don’t get it, better find another hobby. Thanks for reading though. And seriously, please continue to read and support the blog.

As one of the first “gimmick” characters in the Real American Hero run, he was designed specifically to make a toy. Being a baseball player, if his codename isn’t enough of a clue for you, then certainly his place of birth, Cooperstown as the home to baseball’s Hall of Fame will settle that matter.

Doing some research on this character, I came across the YoJoe page. I have the figure somewhere in a box, but I didn’t remember him having those grey arms. The color scheme isn’t on point if you ask me. Maybe that’s also the reason there was only one version of this figure released… until the 2018 JoeCon, where Hard Ball was part of Smasher’s Marauders. I did remember his massive grenade launcher. It looked just that little bit too big. But hey, batter up!

The Marvel comic books show Hard Ball for the first time in issue #80. He uses his skills in pitching baseballs by chucking grenades with great accuracy as a fastball. That got him on the team. He then stayed on to even save the President from being kidnapped by Cobra at a baseball game, again by throwing a grenade at the Cobras. Call him a one-trick-pony. Whatever the case, he did a good enough job to earn his place on the Joe team.

In the Devil’s Due continuity, he is featured in issue #38. He joined Glenda and Rampart to investigate a Cobra outpost in Brazil. When they arrived at the training site, all Cobra agents inside had been killed. The then met the killers, who were working for the Red Shadows. Hardball and his team were then killed too.

Did Hardball ever get featured in one of the cartoons? I don’t think so or I can’t remember. Let me know if you do or know.

I’ve been seeing a lot lately about comicgate and all that. Living in Belgium, most of the drama got past me, but I believe it’s all about equal rights for men & women, racism and other socially important aspects of the global world we live in. I won’t start preaching here, but let me just say that G.I. Joe has been introducing people of all races and gender since 1982, and all of them are equal. I admit that I too wasn’t pleased with Aubrey Sitterson turning Salvo into a girl. Why not just come up with a new character? The Joeverse is so full and diverse that one more new character will not be frowned upon. Thinking about it some more, all I can say is: It’s just a comic book. Why all the fuss? A comic book should depict the spirit of the time in which it was published. And we – the audience, the readers – shouldn’t try and project our current values and opinions onto the old comics.

Here in Belgium, the Tintin comics have caused quite a stir because in one of the stories he goes to Africa and the Africans are depicted as stereotypical as you could get. If you would publish this story today, it’s offensive, but remember it was written somewhere halfway the previous century. That’s a long time ago. We shouldn’t debate whether or not it is correct in this day and age. It is a piece of art showing how the world was like in history. So, study it. Sure. But don’t project it’s story and settings into today’s world. The world has changed exponetially since the Renaissance and I guess that’s for the best. Let the creators create new comics for those who want to read them and to those who can’t agree with how these new comics are written: Just keep reading the stories you know by heart. If you do have a more open mind, try out some of the new stories. Who knows, you might end up liking it and in 20 years you can defend it over some new artist that wants to create a new itteration of it 🙂

Wow, that took some more words than I was planning to write. If you survived this, be sure to come back when we take a look at the next card (yes, there’s a hint there).

Until then! YoJoe and Happy Collecting!