This week we visit a son of the Land of the Rising Sun. Tommy Arashikage, better known as the Cobra Commander’s ninja bodyguard and assassin, Storm Shadow. 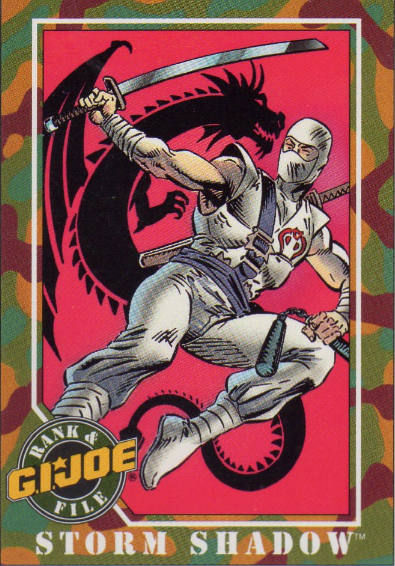 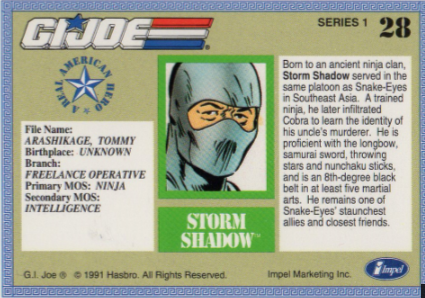 As with every good written character, the real situation is not that black and white. Tommy really is a good guy, an honorable ninja. He got his ninja training, before enlisting in the US Army and serving in the Long Range Recon Patrol along with Snake-Eyes, Stalker, Wade Collins, Dickie Saperstein and Ramon Escobedo. (Listen to A Letter from Snake-Eyes Pt1 from Wordburglar)

He became besties with Snake-Eyes and after the war and drama in Snake-Eyes’ personal life. They both went to Japan to (re-)join the Arashikage Ninja Clan. Snake-Eyes soon became the better of Tommy and it was rumoured that he would become the new leader, even though Tommy was the nephew of the Hard Master. No spoilers here, but long story short. The Hard Master was killed with one of Tommy’s arrows – intended for Snake-Eyes- and Tommy fled from the ninja clan. He joined Cobra because the Commander promised him he would reveal the true identity of the masked man who killed the Hard Master. If you want the long story, check out the entire A Real American Hero run (from Marvel and IDW) 🙂

In the original cartoons, his rivalry/friendship with Snake-Eyes was replaced by honorable fights with Spirit and Quick Kick. The DIC cartoons however, follow the toy line more closely and in these episodes, Storm Shadow is a member of the G.I. Joe Ninja Force. Later on in the Spy Troops and Valor vs Venom cartoons/movies, Stormy is back with Cobra and does have some face-offs with Snake-Eyes.

As for what the figures is concerned, there are about 7,452 different versions of Storm Shadow out there. (The actual number may be closer to 50, but hey, who’s counting). I recently got the v9 from 2002. Here he is wearing his suit from the Ninja Force, but it’s red and has a Cobra sigil. The most cherished Storm Shadow in my collection is the v4 from 1994. This is the color changing Shadow Ninja one. I have the Belgian Ducth/French carded one (I also have Snake Eyes v6 carded). Lastly, I just saw the v1 of Storm Shadow posted by a fellow collector an Instagram I want to show to the world. It’s like a toothpaste commercial, so WHITE! Check it out here. In Dutch, Storm Shadow is called “Bliksemschicht”, which translates into Lightning Bolt (落雷 in Japanese).

Next time, we’ll tackle one of my all time favorite figures.