Hold on to your dentures and prepare to have your minds bent like never before. This post will showcase our beloved orthodontist, evil genius (ahem), proficient in genetics, cloning, engineering and all things science, you name it, he can do it! The Impel Trading Card # 37, presents Dr. Mindbender. 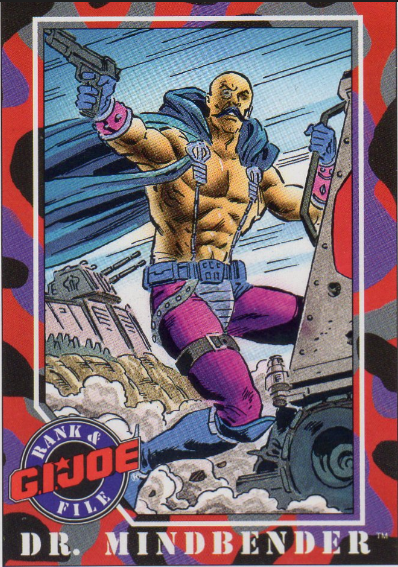 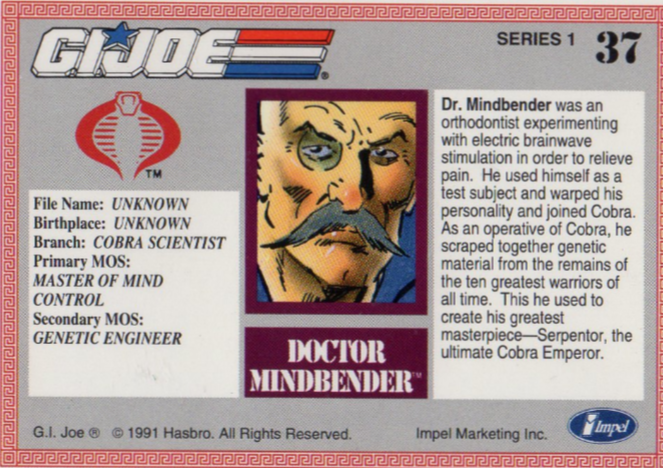 Dr. Mindbender was brought into the Cobra fold to replace the departed Dr. Venom. He introduced us to the B.A.T.s and his 6-pack in Marvel comic # 44. Personally I can’t begin to think what Larry Hama was thinking when he created this figure with a pornstache, monocle, no shirt, suspenders and a purple cape. Would be funny if he based it on his personal dentist. Funny and a bit creepy maybe. During his time with Cobra, he switches side more than once, serving Cobra Commander, Serpentor and even Fred VII. He dies of botulism when he is buried with several other traitors when Cobra Commander (the real deal) rises back to power. Eventually Dr. Mindbender was cloned and served Cobra Commander again.

After Dr. Venom’s demise, a gap within Cobra needed to be filled and I must admit that Dr. Mindbender sure did just that. As Cobras chief scientist, he was crucial to all kinds of wacky schemes Cobra Commander released in the world. He made several additions to the Brainwave Scanner and created the B.A.T.s. His greatest achievement however is the creation of Serpentor, based on the DNA of several of the world’s greatest warriors and a little bit of Storm Shadow baked in him. Together with Destro, he searched and raided the tombs of men like Napoleon, Genghis Khan, Julius Ceasar, count Dracula and some others. I’m sure that it wouldn’t be considered politically correct to have mentioned Hitler, but face it, Dr. Mindbender would have put some of that madman into Serpentor.

The same story is used in the animated series, where Mindbender creates Serpentor because he feels Cobra desperately needs a leader that inspires courage in its troops. Safe to say, Cobra “Retreat” Commander is lacking a bit here.

In Spy Troops, he created new and improved B.A.T.’s and has begun research on the Venom Troopers. When the Cobra base gets destroyed, he loses his research. Said research is rebuilt and in Valor vs Venom, Mindbender turns General Hawk into Venomous Maximus, a creature so powerful he quickly seizes power of Cobra with the help of Overkill. (Rehashing a story I believe this is called…). Venomous Maximus received his own Trading Card in the 2004 Wizards set G.I. Joe vs Cobra (actually he was packed with the DVD/VHS – remember that kids? – and was not sold seperately). 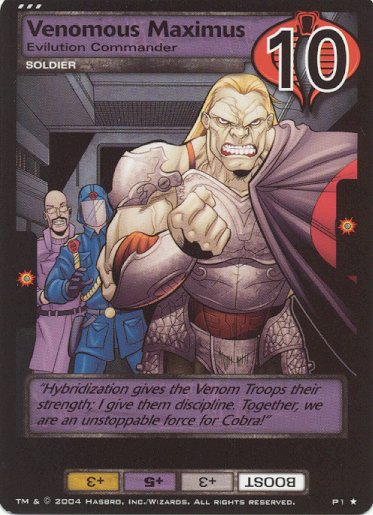 See what I did here, another Trading Card. This series will eventually make it to the blog when I have been able to complete the set. If you can help me get the final missing cards, check out my needs list! Eternal gratitude will be upon thee.

In the Riso of Cobra movie, we get to see Dr. Mindbender with a full set of glasses and a shirt on. He locks himself up in his lab, together with the man who would become Cobra Commander, when the lab is getting bombed. He passes his knowledge to Rex (the brother of the Baroness) and so the whole nano-mites story and Cobra begins. The actor portraying Dr. Mindbender is the same one that played Beni Gabor in The Mummy (the 1999 movie, aka the good one). His character is described as a lying, cheating, obsequious, arrogant, greedy, cunning, cowardly, deceptive, avaricious, sycophantic, manipulative, subservient, and thoroughly unpleasant little man. Perfect for Cobra 🙂 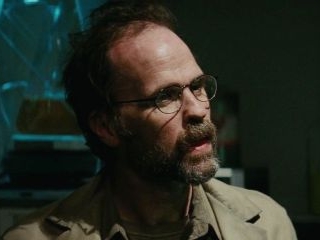 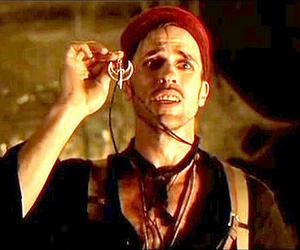 As far as the action figures go, Dr. Mindbender has seen 7 incarnations. The first one from 1986, is the iconic look from the comics. Bare chested with a cape showing the Cobra sigil and monocle. In 1993 (the crazy 90’s), Mindbender got bright yellow pants and a shirt. The 3rd and 4th version from 2002 and 2003 show him with an open shirt and some very serious cleavage. V5 of 2004 teleports the doc into the 21st century, giving him sharp spectacles and a lab coat. Version 6 of 2009 was released as part of the Defense of Cobra Island set and brought the old look of the cape wearing, bare-chested maniac back. And finally, in 2015, the Collector’s Club released an Arctic version of the Doctor, sporting a purple coat with white fur lining. 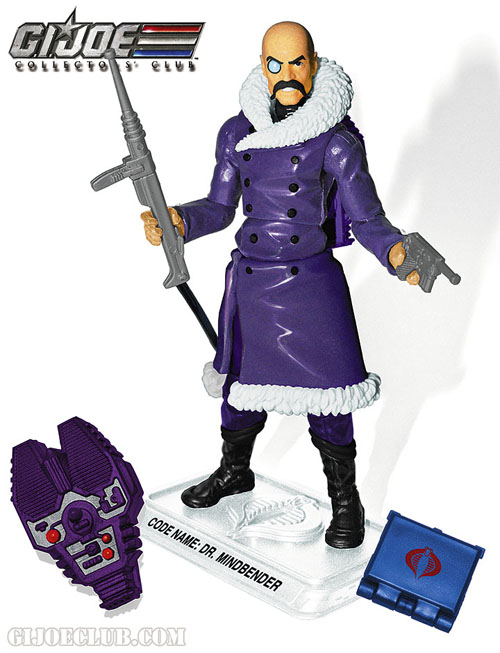 I was a bit surprised when I noticed that I actually have most of these figures in my collection. I’m only missing the 93 and 09 version. The doc doesn’t come to mind when I think of my favorite characters, but the more I think about it, the more I like the guy. The fact that he is still a character in the comics is great (although technically he is a clone) and he’s still Cobra’s main science guy. Not too shabby for an orthodontist turned crazy.

That’s all for now, join me next time when we take on a classic American space western drama television show… wait that’s not right. Damn you Google! Anyway, until next time!