We’re back with another Special Mission. This one (#8) has it’s cover depicted on Impel Trading Card #90, Ambush. Let’s get into the story. 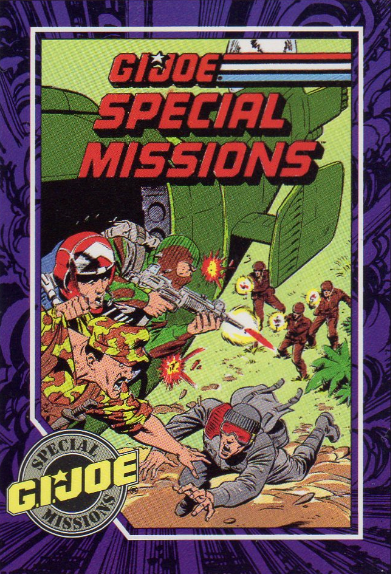 The Joes are flying in a silent Dakota C-47 plane somewhere in Southeast Asia. CIA Agent Anderson is sending a team of Joes to extract Theron Portland, a traitor and spy who was working at a secret surveillance site. 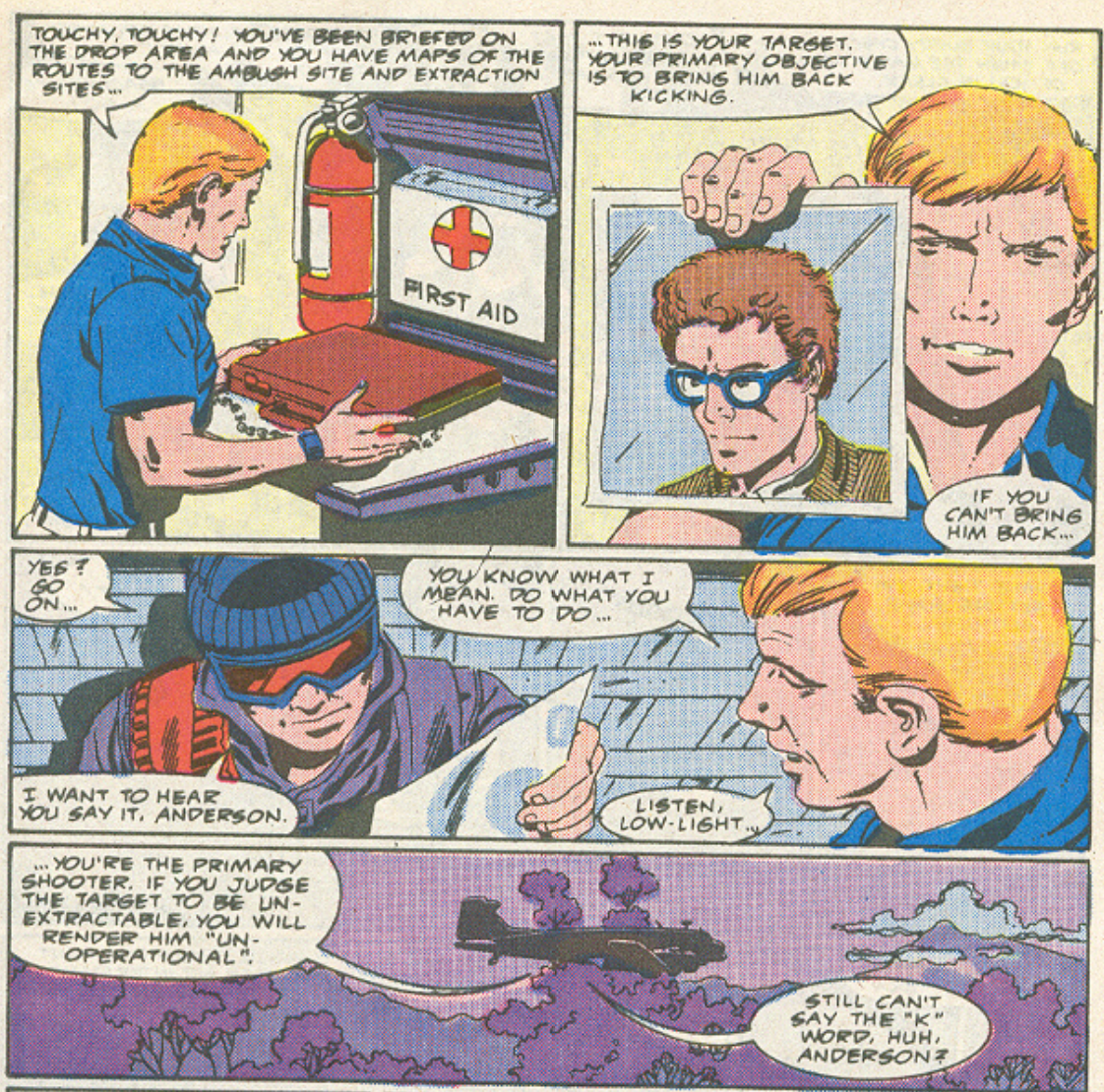 He stole computer chips and fled. The mission for the Joes is to return him to face trial or render him “unoperational” should he not be willing to come back. Anderson gives them the drop site and the site where they should set up the ambush. He provides them with radios so they can signal when they make contact with the target.

The team, Beach Head, Flint, Footloose, Leatherneck, Low Light, Tunnel Rat and Wet Suit, parachute down into the jungle and head for the ambush site.

They investigate the radios that Anderson gave them and find an unfamiliar component. Low Light utters his concerns to Flint about the mission, but Flint orders them to prepare for the ambush as they are the guys who signed up to do the dirty work. They get into position and wait. And wait. And wait. In the blistering heat. 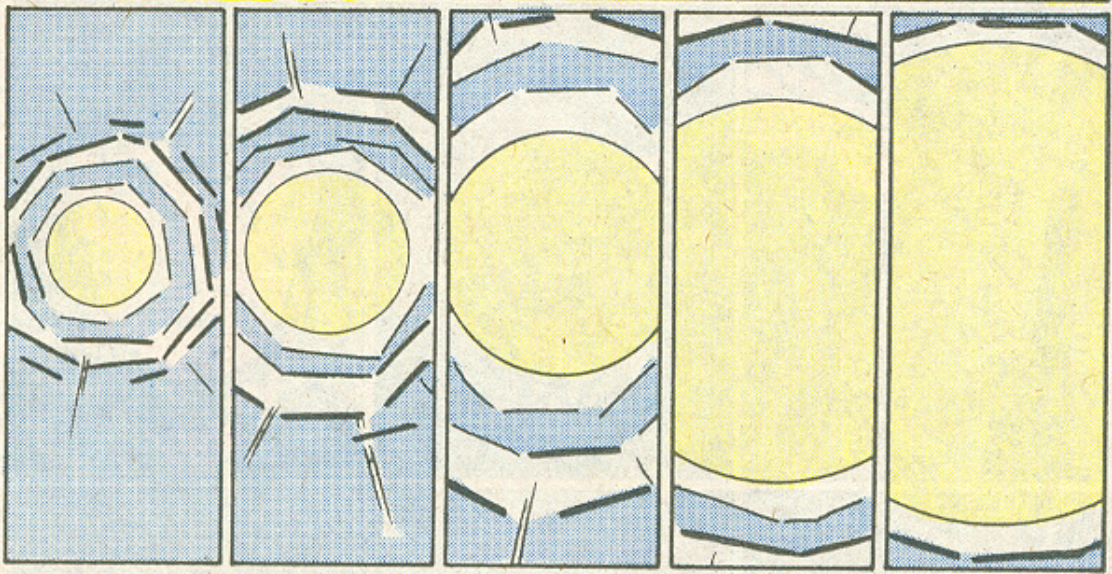 And wait. And wait. And, wait, someone is coming!  A kid is riding a water buffalo down the trail, singing a song. 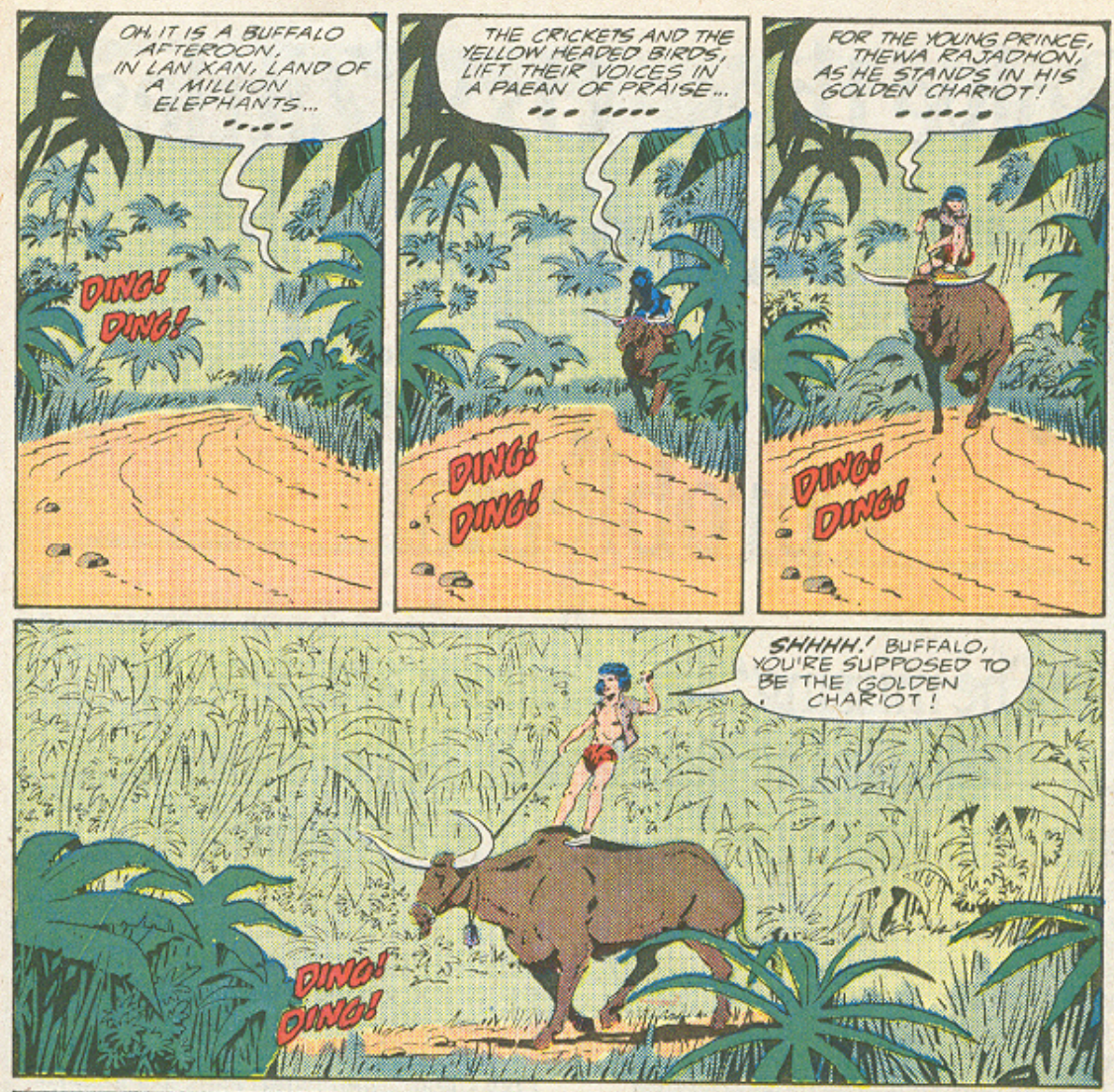 Behind the kid, the convoy shows up transporting Portland. The convoy is actually an armored column instead of a small column as the CIA spook wanted the Joes to believe. The Joes are outnumbered and outgunned.

The leader of the convoy shoots the buffalo and the Joes give the radio signal indicating they’re making contact. As they turn on the radios, a loud screeching sound is produced. They immediately realize that the secret component in the radios is causing it and the CIA did set them up. They no longer have the element of surprise. They destroy the radio and remove the extra component from the other one.

And the firing starts. Low Light spots Portland exiting the tank and chases after him as the Joes start their retreat back to the landing zone where they will be picked up. Meanwhile Low Light spots the leader of the convoy, who is about to shoot the kid from the buffalo and takes him out with one shot. He sends the kid on his way and goes after Portland. 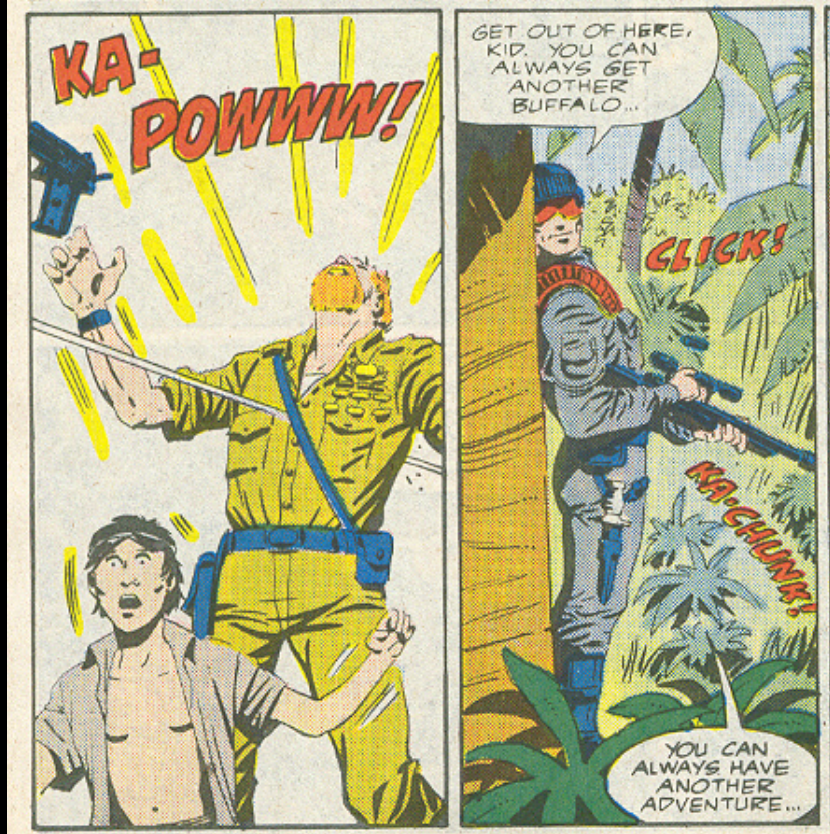 The Joe team manages to stay away from the chasing soldiers and reach the LZ where they call Wild Bill. Just as the Tomahawk is arriving to pick them up, Low Light is sprinting from the tree line, being chased by the soldiers. He makes it to the chopper just in time and get pulled on board. Wild Bill sums up the mission having ‘worked over’ Anderson. Portland was meant to defect with the chips. The ambush was to give him credibility as a turned asset and the Joes were set up and meant to fail. Anderson then informs what happened with Portland. 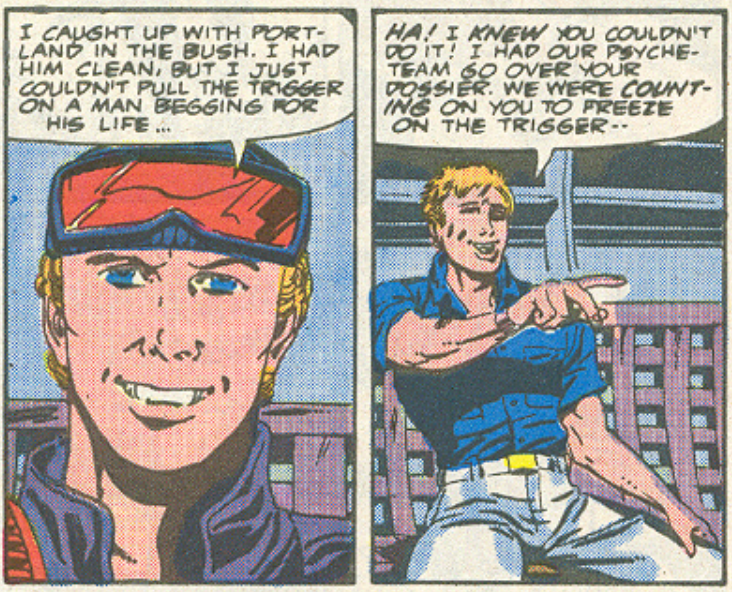 Low Light tells him he refused to kill an unarmed man and that he just knocked him out with the butt of his rifle. Anderson laughs and says he knew this would happen because he studied all their profiles and he knew they wouldn’t kill Portland. What he couldn’t expect though, is that Low Light stole the chips. So the Joes actually accomplished their mission and the CIA’s scheme has failed. 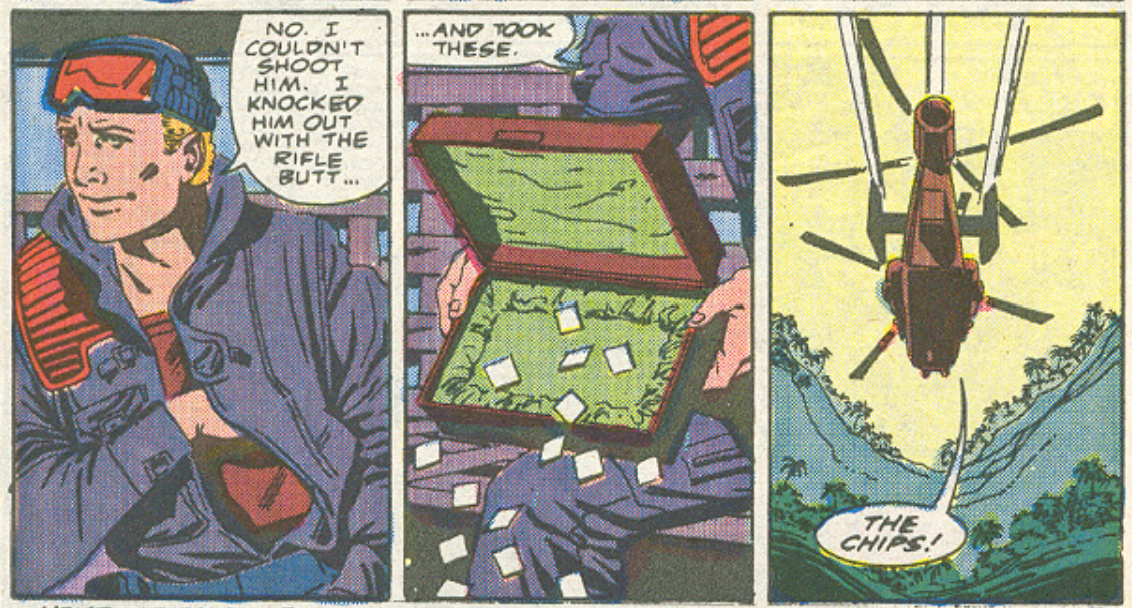 Again this Special Mission gave us an action packed and fun stand alone story. The dream team back at it, presented by the great Stan Lee.

No sign of Cobra in this one, something we see quite a few times in these Special Missions, but that doesn’t mean the story isn’t good. The twist at the end is really surprising and shows that the Joes can get things done, even without killing the target.

The back of the Trading Card features Low-Light, who sort of is the main character in this story. My first memories of Low-Light are actually from the cartoon. We had several of them on VHS, dubbed in Dutch. Fun fact, in Dutch he’s called “Schijnwerper”, which translates into Spotlight. Quite the opposite of Low-Light. Anyway, one of the stories we got here is “Nightmare Assault” which features Low-Light as the main protagonist. When it comes to figures, we got the Slaughter’s Marauders version of Low-Light in 1991 and so it was a bit confusing to see him in his original outfit. 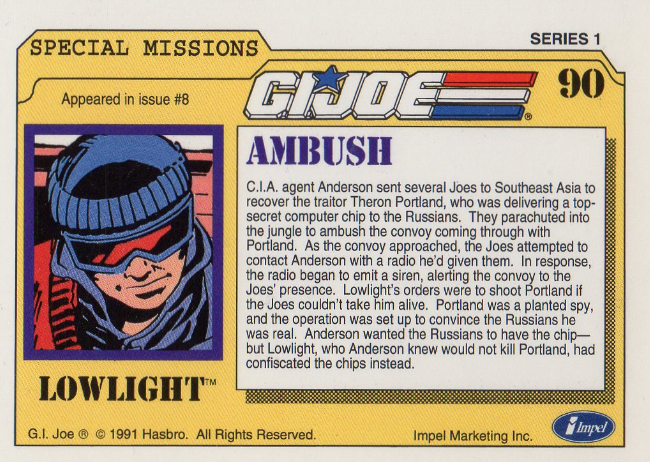 While we’r on the subject of the figures, Low-Light was released 9 times between 1987 and 2011. Most notably are the Slaughter’s Marauders v2, the Dinosaur Night Spotter version 3 from 1993, the 2008 return to the original mold for the Dallas G.I. Joe convention S.W.A.T. pack, the 2011 Slaughter’s Marauders Battle Set for the 30th anniversary and then finally the double pack with the Night-Viper in 2014 (all that kit he got).

That’s all for now. I can’t talk much about the next post, the less you know, the better.

See you back soon!