We have another Rocket Man for you today. Yes, that’s right, a man, suck it Mr. Sitterson. Impel Trading Card # 67 features Salvo. 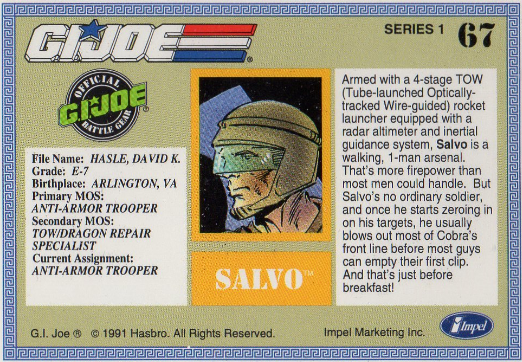 In the Marvel Comics, he first appeared in issue #114. He is part of a large scale operation against Cobra forces in the Benzheen. To say that the guy is a bit buffed would be an understatement. I guess you’ll need a lot of muscle to carry around a 4-stage TOW rocket launcher. 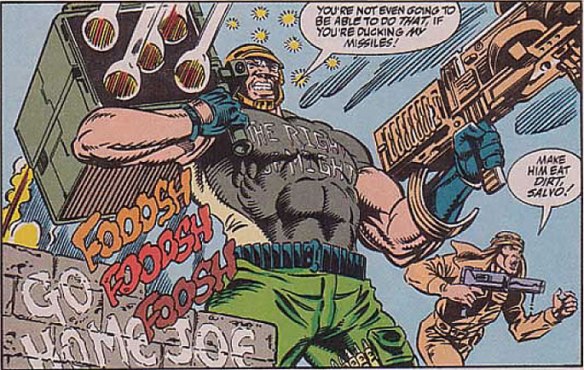 As a Joe of the 90’s, he is however mostly remembered from the DIC cartoon series. He plays a significant part in at least 5 episodes. He gets brainwashed by Cobra, gets to attack Destro’s vulcano base and he helps to stop Cobra’s sun-cream and poison gas from Earth. Gotta love that nineties creativity. Though DIC may have tried to do it cheap, they always replenished Salvo’s rockets between shots 🙂

There have been 3 official figure releases of Salvo over the years, originally from 1990, later in 2005 and then the v3 in 2017 as part of the Club’s FSS 5.0. Most notably on the figures is his bald head (v2 gave him hair!) and the shirt with “The Right of Might” printed on it. I got the original figure as a kid. I know the 90’s Joes get some flack from the community, but you have to admit that they did come with a lot of accessories. Salvo came with a removable helmet, a briefcase, rocket launcher/backpack, 5 missiles, a mine launching type of gun and 5 mines. I’d really like to see toys being this complete nowadays in the stores.

Next time around you might want to put on some thermal underwear, not to get into the guy’s codename, but it sounds painful.