I know you can’t rise and bow at the same time, but you really should to pay respects to the greatest charismatic leader of all time. True story. Ladies and gentlemen, the Impel Trading Card #32 features the astute leader Donald Trump… Seriously, we don’t know Cobra Commander’s real name, so it could be true. 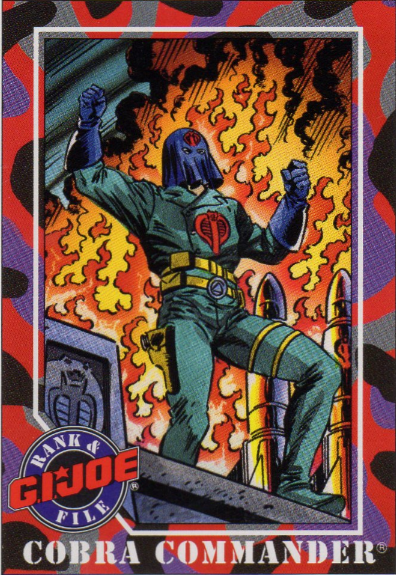 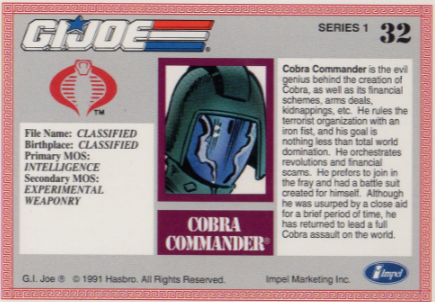 Continuing on the Trump resemblance, he too had a brother that died through alcohol addiction (Fred – Crimson Guardsmen series link!). He too is a bit strange and not connected to the real world. He too wants power and respect but is genuinely incapable as a leader. I could go on, but I don’t want to give him any more credit than he deserves. He isn’t half the bad guy genius CC is 🙂

Cobra Commander has been in the comics since Issue #1 way back in 1982 where he kidnapped Dr. Adele Burkhart. Since then, every single one of his schemes has been thwarted by the Joes – or his own underachieving minions. Later on in the Marvel run, we learn small tit-bits about the Commander’s past, but we never get the full story. Who is the man behind the mask? What was his life like before Dan was killed in the car crash that connected CC with Snake Eyes?

There is no doubt that he is a bad guy. He’s psychopathic, murderous, plain evil. But still, on some level, I can sympathize with him. He was living the American Dream but lost everything without being able to control the events that lead up to his breakdown. He blamed the government, the Big Money, the Corporations. Not to go all psychologist on you, but for some people, blaming others is easier than admitting to their own flaws and failures(or those of their loved ones). And when sh*t things happen you can’t control, who’s there to blame? Maybe history is repeating itself. Maybe Cobra is being (re-)founded as you are reading this.

In any case, let me get back on track here with the Cobra Commander figures that have been released over the years. Can you believe that 54 iterations of the man exist? My all-time favorite still is the first version in Cobra blue and with the battle helmet. He is still awol from my collection, though I have several later versions with the battle helmet. 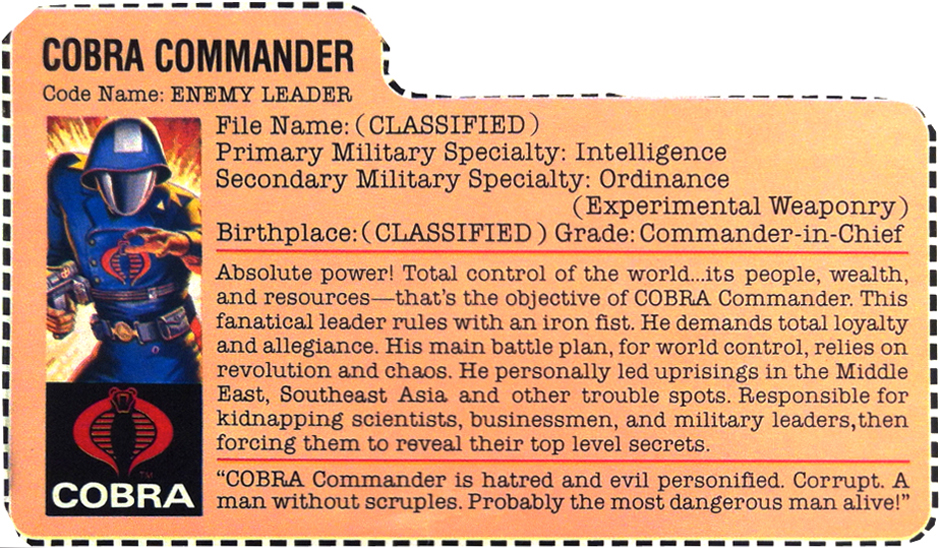 My very first one was the 1984 v2 mail-in version. We had the Belgian fan club over here and they also organized the mail-ins. I’ll have to dig through some of my old papers that are still at my parents’ house, but I’m pretty sure I still have my membership card. I didn’t really like the hooded version. He seemed to skinny to be a good leader (now with CC that’s debatable of course). Next, I have the v4, with the reddish semi see-through helmet visor. Great looking figure with bright colors worthy of the glorious leader CC is. I liked that you could almost see who was behind the mask. I remember having the 12″ version of the Commander as well. He came with a removable hood and underneath was a bad-ass looking head sculpt, but also with half of his face still hidden behind bandana tied over his mouth and nose… I guess we will never see the real face of the Commander. Unless this is really it…

Next, I have the v4, with the reddish semi see-through helmet visor. Great looking figure with bright colors worthy of the glorious leader CC is. I liked that you could almost see who was behind the mask. I remember having the 12″ version of the Commander as well. He came with a removable hood and underneath was a bad-ass looking head sculpt, but also with half of his face still hidden behind bandana tied over his mouth and nose… I guess we will never see the real face of the Commander.

In the Sunbow cartoons, you can clearly see that CC is human, but there is one episode in which he is eating without the mask and Destro walks in on him and is repulsed by what he sees. There is no explanation given, but maybe they blended Snake Eyes’ deformities with CC or was this already setting us up for Cobra-La? Who knows.

Let me get this out of my system right now. As a movie, I like G.I.Joe the movie. As to the story and the whole Cobra-La thing, no thank you. I mean, the stories Larry Hama wrote as background for Cobra Commander and the Joes, are good. No not good, great, better than great, they are Literature people. That’s right, with capital L. Why would you want to change that and give us something like Cobra-La instead? Same goes for the live-action movies of late. They are not bad action films (I’ll let you decide if that means they’re good), but they are NOT G.I.Joe. I don’t think it would have been that hard to translate the whole Hamaverse into a more current setting. Iraq or Afghanistan instead of Vietnam, a megalomaniac entrepreneur instead of a used car salesman (oh, there’s the D again). And lasers, definitely lasers 🙂

The DIC cartoons take place after the story of the movie and we get CC back as (sort of) a human after the Baroness frees him from the life of being Serpentor’s pet. He then creates the Python Patrol (how many snake references can there still be made?) and takes Cobra back from Serpentor who gets turned into an iguana (is this G.I. Joe or Dora the Explorer?). Anyway, Cobra later joins forces with the Joes in battling against Headman and play a football match somehow… Who wrote these things anyway? Probably someone from Headman’s followers.

In the Renegades series, CC is an evil businessman (sounds familiar?) and Cobra is somewhat legit. Naturally, the man behind the unmasked man is a masked and disfigured madman, so Cobra Industries is just the bad guys we love to see. As with the movies, I don’t see this series as canon within the Hamaverse, but as far as stories go, I like it a lot.

Well, that’s it for now. I’m glad I finally found the time to finish this, I have had this as a draft for weeks. Over a thousand words, sorry if I dragged it on too long, but it’s CC, he likes being talked about.