The title of this story is the same as that of an ugly French MPV, it can also refer to techniques to by-pass network security devices or to avoid government mandate through specious means. Here though, it’s one Joe that is showing off his survival skills, his evasive skills and his cunning. It’s time to tackle the Impel Trading Card #88, featuring the cover art for the Special Missions story #6. 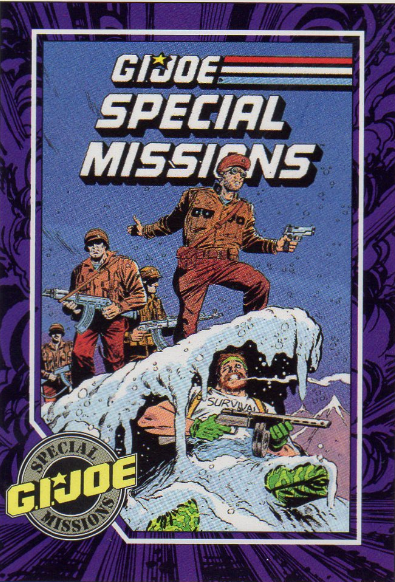 The story starts in the middle of a story really and shows us an injured Snow-Job with Quick Kick and Stalker, all cornered in a Borovian alley. The Borovian military, under the leadership of Colonel Ratnikov, soon realize that there was a 4th man on the team and that he isn’t accounted for. Outback has slipped in the sewer – ordered by Stalker to seek help and report back to the Joes what really happened while the other Joes are sent to rot in a gulag prison.

Outback is able to make it to the edge of town by using a compass and a Michelin guide. Luckily, some intersections have name plates. Meanwhile the colonel has deduced that Outback must have escaped through the sewers and he orders a truckload of fuel to be dumped into the sewers. Outback is sort of warned by a plague of rats screeching past him, but because of the stench in the sewer, he can’t smell the fuel. After it’s been lit, he realizes what is going on and is able to escape through a manhole, clinging to the bottom of a passing streetcar.

He makes it to a local market and steals some clothes to disguise himself. He cuts a deal with a chicken farmer to buy his truck and sets off for the border.

Colonel Ratnikov has closed off the border and is still looking for Outback. They too come across the market and are able to convince the farmer to help find Outback. On his way to the border, Outback passes a hitchhiker and he thinks that it might be better to have a companion since the military will be looking for him, traveling as a duo might be a good camouflage. The guy soon pulls a gun on Outback, but Outback outsmarts him and unarms him. 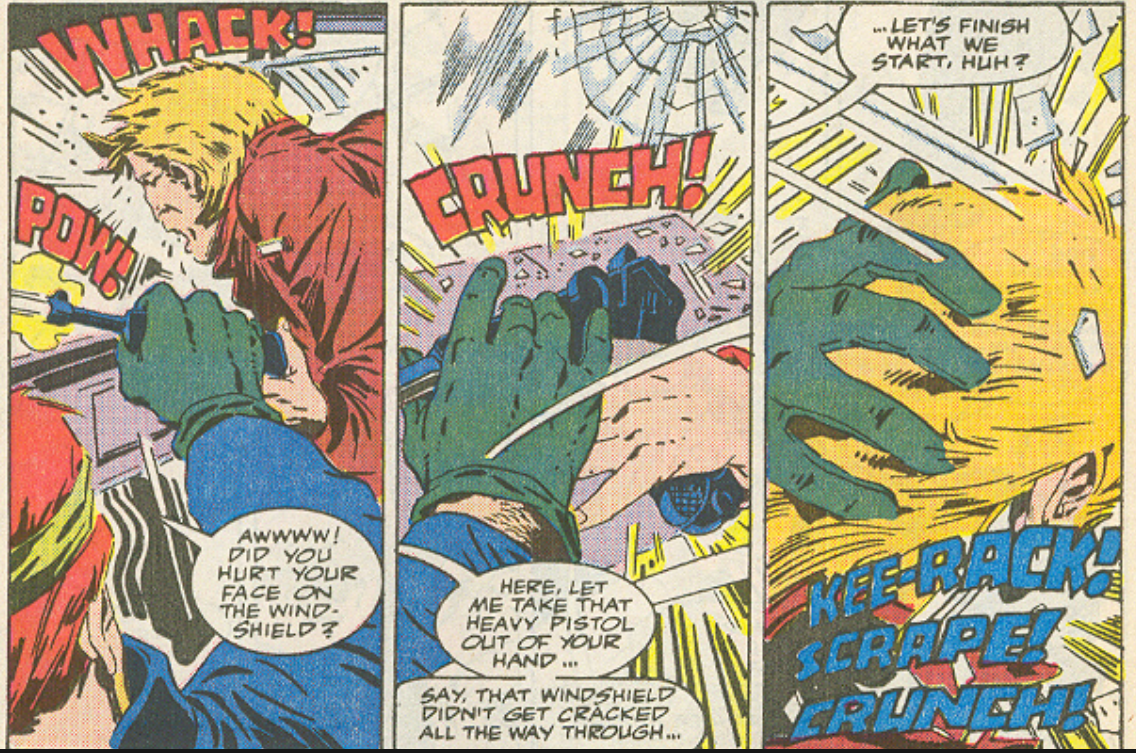 Colonel Ratnikov is still giving pursuit from a helicopter, bringing along the chicken farmer. They spot the crashed truck and set down. The man in the cabin is still alive, but they conclude that it isn’t Outback. One of the soldiers discovers a trail of blood, leading to a figure laying face down in the snow. As they get close, they discover that it’s just clothes, filled with snow and the dead chicken Outback bought from the farmer. Outback jumps out from hiding and catches them off guard. He takes Ratnikov’s uniform and instructs the pilot to fly on his orders after destroying the onboard radio and compass. Before he jumps  out, he orders them to turn around and stay above the clouds. Colonel Ratnikov orders the pilot to take the helicopter down through the clouds and find themselves on the wrong side of the border and get shot to pieces in no time. The border guards capture Outback and he seems relieved and asks to speak to the American Consul. 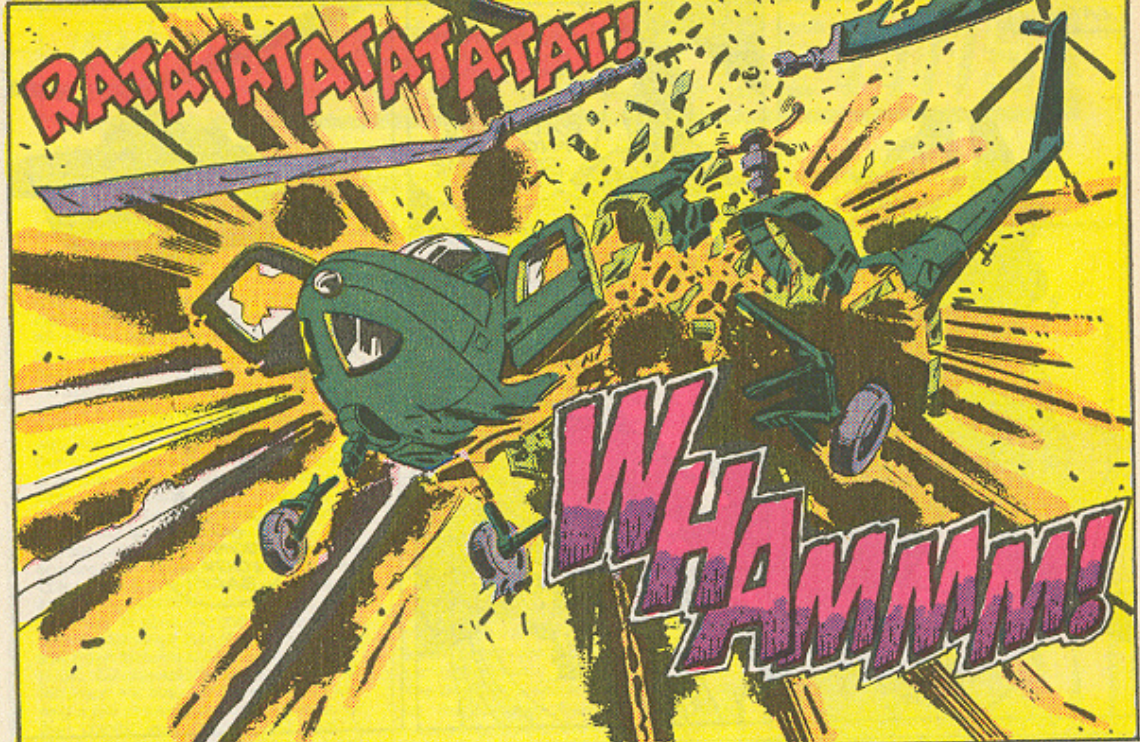 Great story, that’s my short review. My longer review is that I didn’t get it at first. The first time I read this story was in a Dutch Special Missions Omnibus (TPB) that collected several Special Missions. Sure, the banner on top of the splash page did say that the story was a continuation of what happened in Marvel issue #61, but we didn’t get those over here and this was in a time before eBay and before I even got internet. How was I to know what had happened and more importantly, what was going to happen with Snow-Job, Quick Kick and Stalker. It took years before I finally got my hands on the complete run of Marvel comics and I could read the whole story. Talk about a frustrating time. All I could do in the meantime, was search for more comics (all they had around here were the Dutch translations of the Special Missions) and re-read them over and over again without getting the full story. 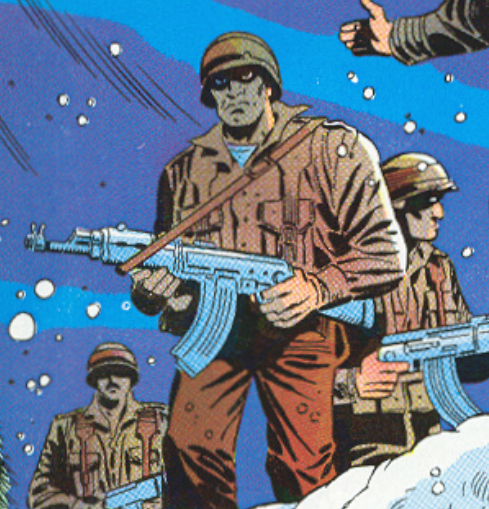 Let’s get back to the card. It shows the cover of the story, I presume drawn by Herb Trimpe. The rest of the creative team is also the same as before, with Larry Hama on script. The scene on the cover does not really show what happens in the book, but it’s a cool looking scene. Outback hiding, partially covered in snow, under a ledge where Col. Ratnikov, flanked by some very mean looking soldiers, is looking for him.

The eyes of the first soldier especially are terrifying. 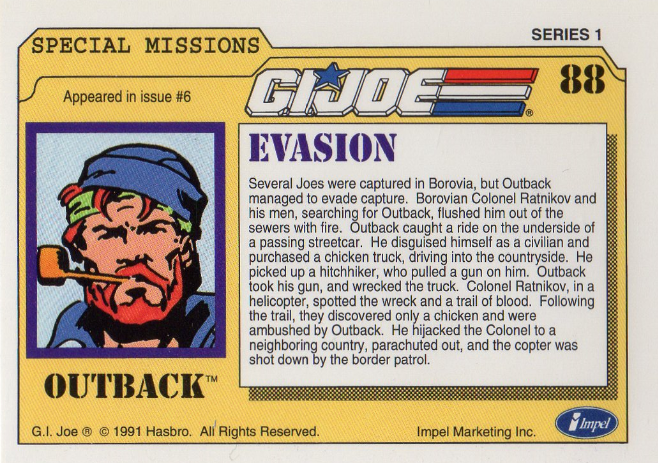 The back of the card depicts Outback the way he appears in the comic book, disguised with a cap and pipe. This leads me to another thing, I only knew Outback from the Tiger Force figure we got here in Belgium, the only version I have of Outback to this day. He had white hair and a white beard. My thoughts were that the colorist made an error, but it remained constant throughout the story, so I didn’t know what was what. I later learned that Outback got 10 figure releases (not including the Tiger Force one we got), and all of them were ginger – safe for the 2016 Collector’s Club homage to the Tiger Force figure. Thank you internet 🙂 Some versions were a little strange though, the 1993 Eco-Warriors line has him wearing a cap and the 2014 head sculpt had a beanie and headphones. Slow down hipster. Read more about Outback on the post I wrote a while ago when we were discussing the Impel Trading Card #69 dedicated to him.

That’s it for this week. I’m going to go through my boxes and try and find that damned little flashlight. Next time we will look at card #89, unless I pull the old switcheroo…