True to my word, today we’ll be taking a look at the Impel Trading Card #84, which is featuring the Special Missions #2. Now this probably does not come as a surprise to you, but now you know, so that’s half the battle done. 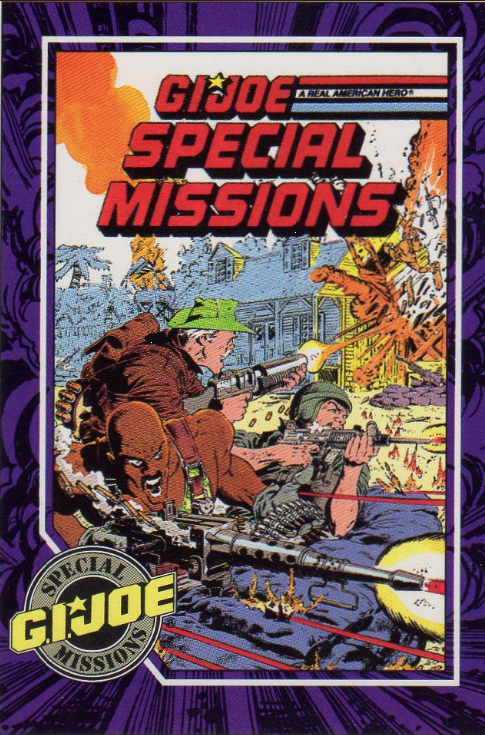 This story is one of – if not THE – best story from the ARAH comic books. Perhaps it’s because I’m living in Europe and in close proximity to several monuments and memorials for the victims of WWII, but that part of history has a special place in our culture. Lest we forget! We shall never forget, and our national television station will keep it that way with new documentaries every week, sometimes twice a week. And don’t get me started on the amount of books that are still being published on the subject. It was a dark time for mankind, but all too often we forget that while we live in peace here now for 70+ years (we’ll have to see what the Brexit brings :-)), too many places around the world are still living in war and fear and death. And for what? King and Country? Religion? These things may play a part, but what it all comes down to is money. Every single war has to do with money. And it also plays a big part in the story here. 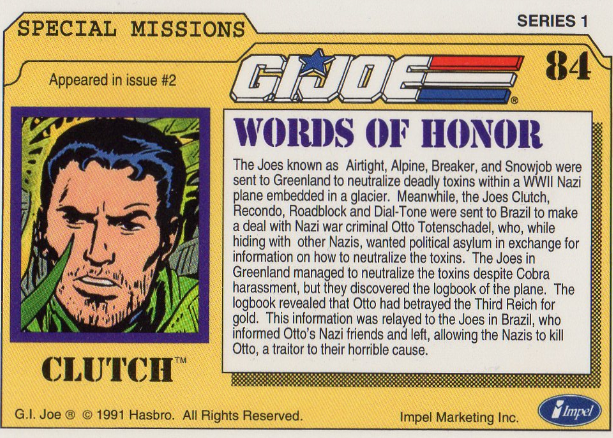 Our story begins with Hawk giving a briefing to Alpine, Snow Job, Airtight and Breaker. Their mission will take them to Greenland where a German WWII Condor bomber has been discovered hanging from a melting glacier. 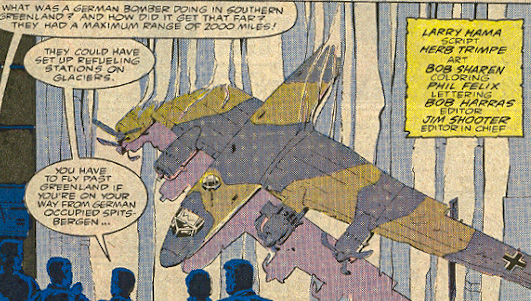 The discovery caused a Nazi doctor, Otto Von Totenschadel, to contact the authorities claiming that the bomber contained a strong airborne nerve toxin. Luckily, he – and he alone – can deactivate it. As it turns out, he has been hiding in South America with fellow Nazis for all these years and wants out. He wants to trade information in exchange for protection against the Jews and in the course, leaving his fellow fascists behind.

In Brazil, another Joe team is already on the move through the jungle. Clutch, Roadblock, Dial-Tone and Recondo are watching the farm where the doctor is residing. The place has been turned into a secure base with fences, search towers, patrols and turrets. It appears they will have to get past all these obstacles undetected to get to the doctor. Then a new group enters the scene and Recondo recognizes them as the Mossad, the Israeli Intelligence Agency. Their leader, Ibrahim, orders the Joes to drop their weapons and Recondo starts talking about the deal they made with Totenschadel. Roadblock knocks him out cold, so he couldn’t tell them any more. When it looks like it will start to rain, they cover Recondo with a poncho. A little weird? Maybe, but it helps the story.

Cut to Greenland as Lift Ticket is dropping the team on the top of the glacier. Alpine and Airtight will repel down to the plane while Breaker and Snow Job stay on top. Just when they set foot on the bomber, a HISS tank appears with Firefly and a bunch of Vipers.

Meanwhile back in the jungle in Brazil, Ibrahim explains that Doctor Otto was in charge of the poison gas chambers in different concentration camps and that he created Sarin-plus, a new aggressive nerve toxin that could excruciatingly kill a man in mere seconds. The Mossad has been after him for years and he should be triad and prosecuted (read: killed) for his crimes. The Joes tell Ibrahim about the bomber and the gas inside and the deal they have with Otto to neutralize it. Whilst Clutch and Ibrahim were talking in the rain, Recondo slipped away from under the poncho and was able to sneak (that is snake spelled backwards) past the guards and into the room of Dr. Otto. 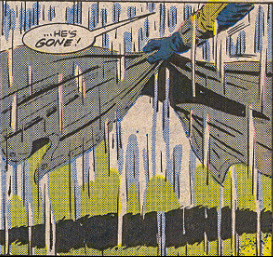 He ever so silently comes crashing through the window… surely those paranoid Nazi’s won’t notice that. Anyway, the doctor nearly got captured by Ibrahim several years ago in Argentina and so he had to go into hiding with the Sons of Nazis at the jungle compound in Brazil. Been there, done that. He wants out. The deal he wants is for the Joes to protect him from the Jews so he can retire in comfort and in exchange he’ll divulge the procedure to disarm the nerve toxin. 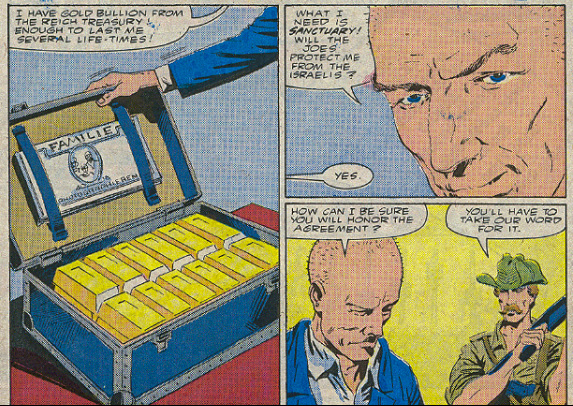 Back in Greenland, Snow Job and Breaker are fighting Firefly while Alpine and Airtight are in the bomber. With a grenade (and some luck), the HISS tank is stopped and it slides over the edge of the glacier. The driver just makes it out, but is hanging somewhere half way down. Inside the plane, Alpine is reading the flight logs as Airtight is disarming the arming system. The HISS driver, soon to fall to his death, starts shooting at the plane and hits one of the tanks. Luckily, the toxin is a binary agent, so both gasses need to mix before they become lethal. It is highly flammable tough and so they decide to vent it out into the wind and leave the bomber. Meanwhile, Cobra troopers are repelling down to the plane, as one of them reaches the plane, his steel boots creates sparks on the wing and the plane explodes. 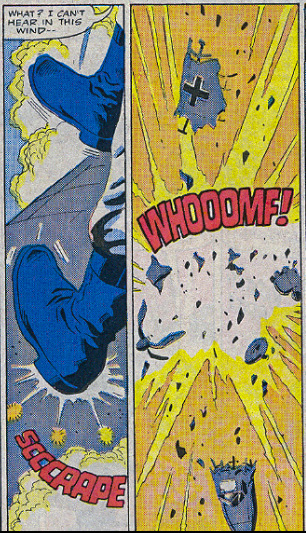 In Brazil, the Joes have joined Ibrahim’s forces and assault the farm. They clear the defenses and meet up with Recondo and the doctor. Dial Tone receives a message from Alpine telling the true story of the downed bomber and it’s pilot. One filled with gold, the other with toxin. Doc Ott (Spidey reference here), lands the plane with the toxin claiming he has a hydraulic failure. The other plane lands to help them and Otto shoots both crews. He takes the plane with the gold and sets of to Buenos Aires where he led a life of luxury. That is until Ibrahim tracked him down and he was forced to accept the help from Hans and his fellow Nazis. They believed he was living in poverty and helped him out of the goodness in their hearts.

The Joes honor their part of the deal and they march the Israeli’s out the door, leaving Otto behind with his “friends”. As they walk out the compound, shots inside are fired. The story ends with Clutch looking straight at us. One powerful look that says a lot…

What. A. Story. And this is a comic book, meant for children. I’m careful not to get a mob of angry Millenials’ knickers in a twist, but these stories are a lot more deep and dark than what they get nowadays. I must have read this one in particular dozens of times. It strikes a nerve every time. I’ve started writing this commentary about as much as I’ve read it. Words can’t seem to do it justice and each time I start, I get stuck again and keep on thinking about this dilemma over and over again. This story was told in the 1980’s, and today, still, the subject is relevant. Our countries here still bear the marks of the war, just last week, half a town on the coast got evacuated because they had dug up an old aircraft bomb (whilst building another one of those monstrosities they call apartment buildings – but that’s another discussion). I’ve said it before and I’ll keep on saying it. No country, no king, no god is worth killing or dying for. We have one world and we need to share it with everybody on it.

Now let’s get technical. The cover for this issue was drawn by Mike Zeck and Dennis Janke. The script is of course by Larry Hama and art by Herbe Trimpe. What can I say? It’s a dream team. I’m not much of an art critic, I read the comics for the story mostly. Don’t get me wrong, I really like the drawings, but if they ever make a full blown novel series of these stories, I’d be first in line to get them. I also don’t pay as much attention to the artwork as perhaps some other people do, but as I said, that doesn’t mean I don’t like what I see. Since I’m on the subject, as I’m writing this, next Saturday will be Free Comic Book day. A nice initiative to get to know new series and support your local Comic Book Shoppe. Here in Belgium lately, people in the industry have been talking that the medium of Comic Books (strips as we call them) on paper as they are now, are no longer profitable and so they are talking about digital comics with a more interactive and immersive way of reading. Things like adding sound effects, image effects, … I can see the appeal it has, but leave some room for imagination. That’s part of the charm and keeps people engaged in their own way. You’d be getting some sort of stop-motion cartoons instead of comics and I don’t think that would be a step forward.

The character spotlight on the back of this card is on Clutch. Click the link to see the post we did a while back on him and the rest of the original 13.

To come back to the story and the ultimate question it poses. It is a question  of morals and ethics. Would you leave a man, guilty of some of the most horrific acts, behind among his peers knowing he’ll get killed? The look in Clutch’s eyes says it all… So that’s what I’m ending with too. Think about it for yourself and then rethink and rethink and … 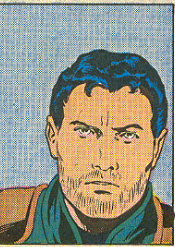 Next time we will meet and defeat Colonel Sharif.