9 years after Dan Hardman and 5 years before Take That, the Joe team had a second man joining their ranks who can take the heat. – Spoiler Alert – Sorry for the Barbecue fans out there, we won’t be seeing him on these cards. The Viper is coming though 🙂 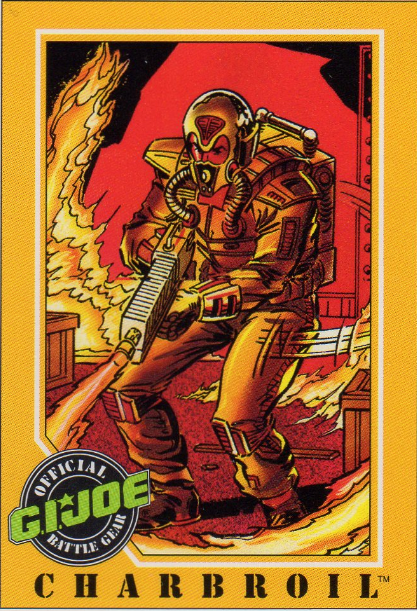 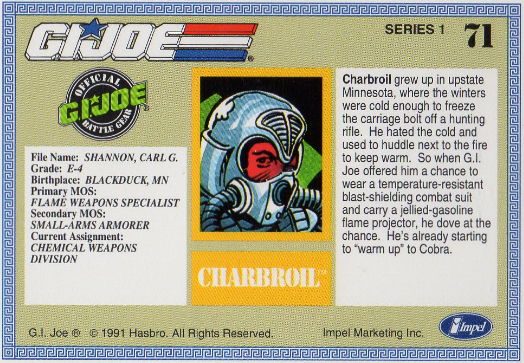 I seemed to end up with a lot more Joes than Cobra’s when I was a kid. I guess I only saw good in the world 🙂 So when it came to battle, I was short on Cobra’s all the time. My solution… defecters and traitors. Okay, that’s not so good, but it did give me better fights. One of the guys that always sided with Cobra is Charbroil. First off, the guy is very ginger. And by very I mean unnaturally orange hair. And we all know, ginger kids have no soul, and knowing is half the battle. Just take a close look at his helmet. There is a Cobra insigna on it! Well, at least something that resembles it very closely. So I think (my completely unfounded theory here), that he was intended to be a Cobra all along, but somehow got switched sides during production.

In any case, there have been 6 figures released of Charbroil between 1988 and 2017. The second version was as a member of the night force and was just a complete repaint of the original. So was the 3rd version in 2004, this time as a member of the Anti-Venom Task Force. He did get a cool looking new helmet. Version 4 came in 2009 with the release of The Rise of Cobra toys. This version is plain and simple Barbecue, but Hasbro probably didn’t have the name trademarked anymore and so they just labeled him as the Joes’ other all-things-fire-related specialist. The next iteration dropped him back into the Night Force, this time for the 2013 Convention Exclusive Set. And finally, v6, was released in 2017 in the club’s FSS 5. The figure was a hommage to the original and looks very nice indeed. Underneath the helmet he wears a baklava. Which makes sense really since he is working with fire. And it hides his orange hair. Win-Win if there ever was one 🙂

The next post may come as a surprise, so be vigilant. And watch your back! And your front, you never know from where it may come. (It will 100% definitely be on the blog, so you know, just building the tension here).