If you read the previous post, you’ll have figured out that this week’s Impel Trading Card is Etienne LaFitte, G.I. Joe’s resident Cajun U.S. Marine better known as Gung-Ho. 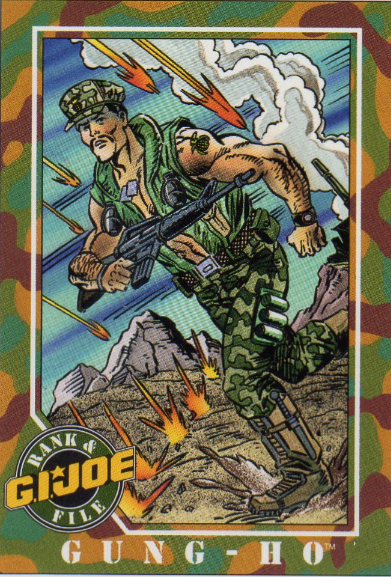 In total there have been 21 figures of Gung-Ho released. Only five of these depict him with his bare chest and U.S. Marine tattoo (in various sizes and colours). There is one shirt wearing Gung-Ho figure that shows the tattoo is a rather deep man-cleavage shirt. Off course, most people will remember him as the bare-chested Marine, but my favourite figure is the 1987 version in full Dress Suit. More on him in about 31 Impel Trading Cards (the exact double of this card´s #… coincidence, I think not!).

In the comics, Gung-Ho´s first appearance coincides with the introduction of Cobra´s new specialist, everybody´s favourite arms dealer Destro. The Joes are sent to the Alaskan tundra to investigate the presence of Cobra forces. And naturally, in this cold and harsh environment, Gung-Ho is there shirtless. During the whole story, Gung-Ho´s model sister is mentioned when Snow Job tells Rock ´n Roll that he can set up a date for him with her. Neglecting to tell Rock ´n Roll that Gung-Ho´s sister is  a child model.

In the original cartoons, Gung-Ho is also depicted in his 1983 look, blueish camo trousers and the open blue vest. He is seen in the intro of the cartoon alongside Duke when they start charging after Stalker landed next to them. In the double episode Captives of Cobra, Cobra tries to get to the Joes by kidnapping their families and holding them hostage. The Baroness is sent into the Bayou to capture Gung-Ho´s family, but they can handle themselves rather well and overpower the Cobra troops.

Next time we will take it to the top of the pyramid before we´ll retreat gracefully.